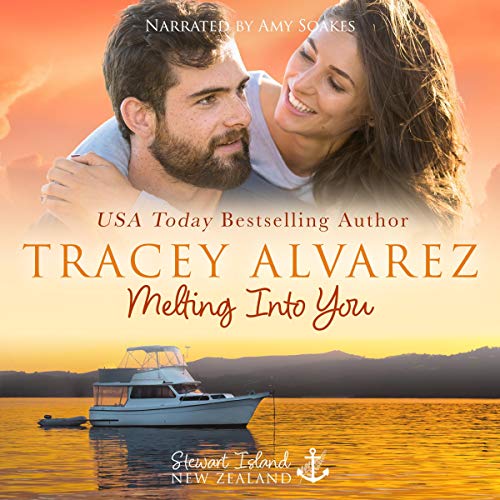 Melting into You (A Small Town Romance)

Melting into You (A Small Town Romance)

Ben Harland is, by his own admission, a bit of a grouch. He doesn’t do soppy chick flicks or cozy home and family. He sure doesn’t need any more drama in his world. But life has a way of biting him in the ass. Cue insta-daddyhood to an eight-year-old girl who lands on his doorstep and an out-of-control attraction to Stewart Island's hot school teacher.

Kezia Murphy plays her widow card well. When you don’t trust people not to let you down, you don’t get involved. Though Ben makes her skin sizzle just by looking at him, he’s counting the days until he’s once again a single man. But no matter how much Kezia yearns for his touch, and her daughter Zoe longs for a daddy, can Ben ever be the right man for the job?

Ben and Kezia are an unlikely pair. There is no way these two can get together because Ben does not like kids. Or is there still a way? It is such a small town that everyone knows everything about each other. Yet, Ben still finds himself falling for Kezia. I liked Kezia. I thought she was a very strong woman who had lost so much. Ben took awhile to like, but I eventually did. The chemistry between these two takes a bit to get started. But once it does, be prepared to feel all the emotions. This book is a rollercoaster ride, worth jumping on.

Amy Soakes has a great accent for the setting of this book. I enjoy visiting this town, as it is so far from where I live. It was like a getaway. Ms. Soakes brought these characters to life. I felt as if I was right there, experiencing the story with them. I cried, I laughed and I loved along with the characters. This was a great listen.

I read this book when it was first released in 2014 and Ben, Kezia and the girls stole my heart then, but listening to it gives it a whole new life and they will melt your heart before stealing it! Be prepared to cover every emotion possible, I suggest listening when you are alone as you will laugh out loud, gasp in horror, giggle uncontrollably, cringe in disbelief, snort in amusement, weep with sadness, cry with laughter and growl in frustration but you will also enjoy every moment of the journey you take with them. Listen now, I promise you won't be disappointed!

finding love when you don't really want it...

Welcome back to Stewart Island, where the locals are treated like family and where you can avoid commitment...if you're Ben Holand. Ben is in for the shock of his life when a long ago hookup shows up and introduces him to his 8yo daughter. Now Mr. Commitment Phobe is scrambling and making adjustments to his life. Thank goodness he has a friend like Kezia! The single mom and roommate of one of his sisters, Kezia has her life put together. She's great with kids, good thing since she's also his kid's teacher, and she helps to engage his daughter and bring her out of her shell. Now if only he wasn't so attracted to Kezia. Kezia is also attracted to Ben, but she has her own commitment issues that stem from a bad marriage. Will these two be able to put aside their fears and give love a chance?
I really enjoyed this story and the narration! The narrator did an excellent job in distinguishing the various characters. For me, a book is most enjoyable when I can picture myself as a bystander. I could 'see' Ben's interaction with the little dog, Sparky; as well as with the annoying ex, Marcy. Highly recommend this series and looking forward to Shaye's story :-)
I voluntarily accepted a complimentary copy of this book in exchange for an honest review.

Solid seccond title in the series!

Life hasn't been easy for Kezia Murphy. Four years ago, her precocious daughter Zoe fought and won an epic battle with leukemia. In the midst of that struggle, Zoe's dad was lost to them forever in a senseless accident. Once Zoe recovered, Kezia packed up their belongings for a fresh start on Stewart Island, determined to never again depend on people who would ultimately let her down. Ever since, it's been her and Zoe--with a tiny bit of help from a small group of select friends, Piper and Shaye Harland among them--against the world.

Enter Ben Harland. He's the oldest of the Harland siblings, and he is so absolutely out of the question as far as Kezia's concerned. Sure, he's hot. But can you say commitment phobe? Ben's got two rules: one, never mess around with local women; two, ditto friends of his sisters. Kezia's a check mark in both columns, thankyouverymuch. Soooo not going to happen.

Except they have a crazy attraction going on...which they maybe could have kept on ignoring. Until a major surprise shows up on Ben's doorstep one Saturday morning...

His eight-year-old daughter Jade. Whose existence Ben knew nothing about until that very moment--and suddenly, he's got a pint-sized house guest for two weeks. And not a clue what to do with her.

But, hey--Kezia teaches eight-year-olds. Heck, she has an eight-year-old--and Zoe's already decided that Jade's going to be her new BFF.

So, no problem. Ben can get a little help from Kezia for the next two weeks, squeeze in a one-night-only fling with her somewhere far away from prying Oban eyes, and send his daughter back to her mother at the end of the holiday, none the worse for wear. And then he'll have his life back, no sweat.

Riiiight. You know how well that's going to work out, don't you? Yeah, so did Ben--but he went there anyway:

“'One time, and no one—especially our girls—will get hurt.'

The door hissed shut after her, leaving him staring at the scarred wood. Kezia was right. Nobody needed to know a fundamental Ben rule was to be broken. Limiting it to a one-time thing meant no entanglements or emotional demands afterwards.

So, why did it piss him off a little that she suggested it?

Because he was a moron. A moron who agreed to a single hook up, when his heart told him in no uncertain terms once wouldn’t be enough.

Delusional, lust-hangover-talk. His heart didn’t know what the hell it was talking about."

Melting Into You has it all, from touching family drama to off-the-charts sexual chemistry. Watching Ben get closer to his daughter and becoming a real parent, is wonderful; not to mention laugh-out-loud at times. (Having him enter the Due South's Manliest Man contest was genius--trust me, you'll love that part! So much fun to read.) Witnessing him and Kezia finally give in to their attraction is worth every cold-shower-inducing moment that comes before for the two of them. Learning new substitutions for swear words ("fucoid" is definitely one I'll be using in the future) and some actual Italian curses give the reading experience a little extra something--not that it needed anything more.

"Female-taming techniques 101—rack brains for what they might mean, then agree using carefully rephrased words."

Ah, if only they all learned that lesson so quickly and well. ;)

Melting Into You, though it is the second in the series, can be read as a stand-alone. Piper and West, the hero and heroine of In Too Deep, make just enough of an appearance to whet your appetite for their story, though--don't say I didn't warn you.

And finally, words of wisdom from the youngest Harland sibling, Shaye:

" 'Falling in love shouldn’t be stressful.' Shaye picked up her flatware with a small frown.

Piper snorted, coughed, and thumped her breastbone with a fist. 'On what world other than a Disney-animated one is that statement true? Puh-lease.'

'Well, when I fall in love with the perfect guy, there won’t be any stress.' Shaye scooped up a forkful of rocket and beetroot salad and stuffed it defiantly into her mouth."

I received a complimentary copy in exchange for an honest review.

Tracey Alvarez's books make me want to visit New Zealand.
The atmosphere of the town is typical small town. The characters are believable, but entertaining.

Ben is surprised one day with a past fling bringing his daughter, Jade, to stay with him. The daughter he didn't know existed.
Kezia is Ben's sister's housemate and a teacher at the local school. She has a daughter the same age as Ben.
Kezia helps Ben to get used to the idea of parenting, with some conflict between the two. The pull between them soon becomes too strong for them to resist.

The narrator does have a Kiwi accent, but it is not so strong that it is hard to follow the story. It just helps set the atmosphere.

I absolutely loved listening to this audiobook, Tracey Alvarez and Amy Soakes did an awesome job bringing the characters to life and I can't wait for more of this series

I found this audiobook to be a very good listen. It has a great combination of drama, romance and suspense. The narrator does a wonderful job reading this book.

Ben has an eight year old daugther he didn't know about. Kazie, his down the road neighbour, has an eight year old girl too and she is the teacher un Stewart Island school. Will she help Ben bond with his daugther for the two weeks she is going to spend with him without losing her heart in the process? will Ben open gis heart to love and happiness?

I listened to the audio version of this book.
The story about a widowed mother and a (surprise!) single father was pretty good. I loved how Ben's relationship with his daughter built and how he came to realize that the woman next door was the one for him. His growing into love with the two females was awesome.
I'll have to admit I wasn't too crazy about the narration. I took awhile to get used to the accent (the story takes place in Australia), but that wasn't that big a deal. I usually bump the speed up a little, but found that that didn't work for me with this narration. What bothered me more was the rather whiny voice used for some of the women characters. It was also hard to distinguish the women characters sometimes.
I was given a complimentary copy of this audio book. All thoughts are my own.

Loved the Ebook, Not the audio version

***This Review is Solely For the Audio Version***

I am so glad that I had already read this book before listening to the audio version.

The narration did nothing for the book as far as I was concerned. The narration for Ben seemed to be one of the only distinctive voices. Kezia, Zoe, and Jade seemed to be interchangeable. The three females all sounded alike several times.

At one point in the book, Ben and Kezia were beginning a steamy scene where Kezia responded to Ben. I thought that it was Made it Zoe for a few seconds. That pulled me completely out of the flow of the book.

I would still recommend that you READ the book. I don't think the audio version does the story justice, and I wouldn't want you to miss out on a good book because of the audio.

I voluntarily listened to and reviewed this audio book received from the author.

I enjoyed returning to Stewart Island & it’s wonderful residents. Ben, Kezia & their daughters were a delight.