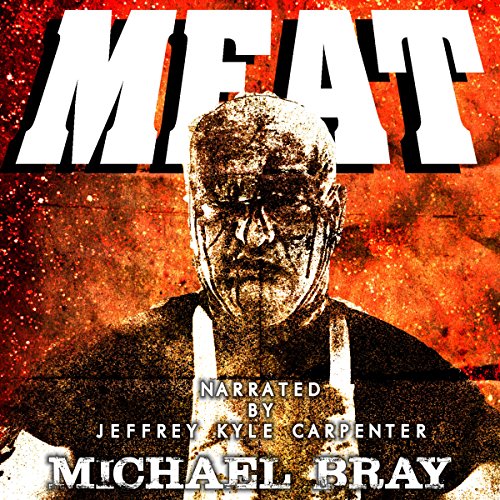 By: Michael Bray
Narrated by: Jeffrey Kyle Carpenter
Try for £0.00

Welcome to Grueber's, the brand-new all-night supermarket chain with a difference. For its unfortunate customers, the ordinary looking store could be the last trip they ever make; for its shelves are stacked with horrific delicacies made from human flesh, and the store boasts a meat aisle that has to be seen to be believed. The unlikely group of unwitting shoppers must come together to not only survive, but to try to find a way to escape from the store and the inhuman staff who are keen for them to stay forever.

What listeners say about Meat: A Vampire Novella

Would you listen to Meat: A Vampire Novella again? Why?

I never listen to any audiobook again, as i have so many i want to listen to.

What other book might you compare Meat: A Vampire Novella to, and why?

This tale is one of a kind. It was like a Twilight Zone vampire story.

When Lee blew off Bo's head.

How far will you go when lives are at steak!

If you could sum up Meat: A Vampire Novella in three words, what would they be?

What other book might you compare Meat: A Vampire Novella to and why?

I'm not sure I could compare it to anything. I've never read or listened to anything like it before. It's a really disturbing story overall. I love scary weird stuff, and this even unnerved me. It's like The Walking Dead in a surreal supermarket setting. But it has a really solid story and creepy vibe to it. I'm hoping that Michael Bray has intentions of doing a sequel to this book, because I still have mixed emotions about Garrett.

I think when "the group" was trying to escape, and were forced to witness their surroundings as they made their way to a hopeful freedom. I could literally feel and sense what they were witnessing along the way. That was pretty disturbing for sure. I really don't want to spoil it for other listeners, so I will just leave it at that.

Who was the most memorable character of Meat: A Vampire Novella and why?

I liked Lee the most. He surprised me as far as to what type of guy he played out to be. There were a couple other characters that ran a close second, but he is my pick.

The is one crazy, creepy story that still makes me uneasy when I'm forced to go to the grocery store. It's my first take on the author Michael Bray, but it won't be my last, I really like his writing style. The narration was very entertaining as well. I've heard Jeffrey Carpenter read a couple of other books prior to this. He is a talented guy, and I always have my eyes and ears open to his work in the future.

STUCK IN WALMART, the real horror

The book is four hours and twenty minutes long.
I listened for a little over an hour
Would have been a good fifteen minute humor/satire
Bad Bad Bad Bad Bad writing