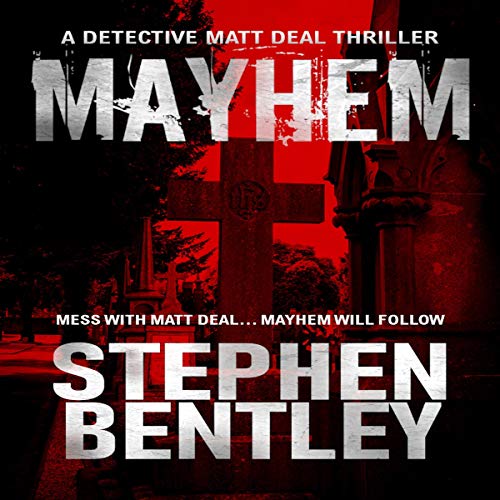 By: Stephen Bentley
Narrated by: Chris DeFazio
Try for £0.00

At the funeral of two of his hit men, Mike Russo, capo of the New Jersey Mob puts out a contract on Detective Matt Deal for his part in the killings.

At the same time another funeral is taking place in Florida. Deal will soon learn just how badly his world is broken...and it’s about to get worse.

The long awaited sequel to book one in the series - Mercy.

Fans of Jack Ryan or lethal killers like Reacher or Scot Harvath will devour this novel.

What listeners say about Mayhem: A Detective Matt Deal Thriller

Fast and furious, full of action.

What a wonderful read/ listen too this book is, characters old and new that are easily imaginable and believable, The plot of the story is extremely well written and lots of action and violence.
I was gripped from the beginning and didn’t want to stop listening to find out what happens.
Put this book on your “must-read” list.
The narrator does a good interpretation of bringing this story to life but for myself, I was not keen on his voice but that could be with me being British and it does make a difference to dialect.
I received this book for free from the author and #Story origin and wanted to leave an honest review.

Great story, ok narration. Follows on directly from the first novel but can be read as a standalone. Matt Deal continues his adventures against New Jersey mobsters and Mexican Drug lords. Lots of action and violence, the return of some characters and a few new ones. Enjoyable story with strong characters, let down a little by the narrator who does fine with the American accents but makes no attempt at an British an issue when some the characters are British. I received a complimentary copy from storyorigin and an leaving a voluntary honest review

Wow what a fantastic hard hitting, action packed audiobook from the extremely talented author Stephen Bentley and brilliantly narrated by Chris DeFazio. I really do need to know what happens next xxxxxxxxx

Mayhem was equally as good, if not better than the previous book, Mercy. Great characters and plot. I’m looking forward to a 3rd book in the series

Action All The Way

This is an intense listen, a thriller that certainly fulfills its Mayhem title. The action moves through several locations in the USA and Mexico leaving a trail of bodies. There are several macho clichés within but I think they add rather than detract from the novel as it's who Matt Deal is. The pace pauses in the middle, we can breath again, as Matt's domestic situation is greatly improved, however deadly drama is never far away. The listener is left on a cliff hanger so the next Matt Deal book is a must. Chris DeFazio does an excellent job with the narration. Overall a very enjoyable listen.

If you like action heroes with the tenacity of Baldacci's John Puller, or Child's Jack Reacher than this is your book and series. Great Characters and a solid story line. Chris DeFazio does a good job of narrating. Recommended...I was provided a free review copy of this audiobook, and this is my unbiased review.

Stephen Bentley's Matt Deal series is gritty, raw, and visceral. This sequel picks up soon after the ending of the first book and Matt Deal has a contract out on his life, for his previous actions. This story is filled with twists and turns and a lot of non-stop action; however, the reader is starting to see an emotional growth in Matt Deal that wasn't present in the first book. I recommend this series to anyone who likes hard-boiled mysteries. Chris Defazio's narration is great, adding an extra layer of entertainment to the story. I was given a free copy of the audiobook and I have voluntarily left this review.

Another well-written story from a very good author

Mayhem (Detective Matt Deal #2), my second highly enjoyable read from author Stephen Bentley, An author I'd not heard of before getting the opportunity to read & review these books! December seemed to be my month for new authors, January continued the trend, and now February. A well written, entertaining read, with intriguing, well-developed characters. Initially, I was going to say the two books easily could have been combined into one but after reading this book I realized that it's just the author's style to end books the way he does. A bit slow to start but when it took off I couldn't turn pages fast enough. Chris Defazio"s outstanding narration again adds greatly to a good book's enjoyment. “I received a free review copy of this book and am voluntarily leaving a review." I look forward to reading more from this author. (RIP Marley January 20, 2014 - July 24, 2018).

The audiobook storyline is a continuation from the first book in the Matt Deal Thriller series. If you enjoyed book one “Mercy” you will enjoy “Mayhem”. The narration is too slow for my ears, listening to the audiobook at 1.3x to 1.5x speed does help somewhat. I received this audiobook from the author at my request and have voluntarily left this review.

Matt Deal is back to take on the cartell.

I received an offer of a review copy of the Mayhem audiobook through StoryOrigin and after reading in the title it was a Detective thriller I jumped on the opportunity. Once again, this Matt Deal story starts right off with intense action and doesn’t let up until the very end. Interestingly enough, the graphic adult situations in Mayhem were far fewer and a bit less in detail, then they were in Mercy, which made this story much more enjoyable. While the narration is good, it could have used accents for Matt and the other English characters.