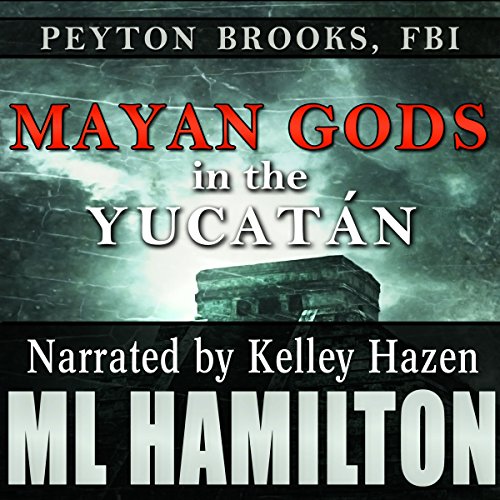 Mayan Gods in the Yucatan

Peyton and Marco have always led complicated lives, but now, their cases are pulling them in different directions.

After his surgery, Marco has a long road of rehabilitation ahead of him, but his precinct needs him to focus on the murder of a young serviceman who might have intimate ties to the mayor.

Peyton wants to be there for him; however, when a DEA agent turns up missing, the Ghost Squad is called to the Yucatan to investigate. What they find there will embroil them in a drug war between two countries, where illicit activities are being bartered underground and the players are impossible to identify.

However, as Peyton and her team soon learn, they are facing an adversary that will only be appeased in blood - the blood of humans sacrificed to an uneasy Mayan god.

What listeners say about Mayan Gods in the Yucatan

I loved this book. I want to say that it is my favourite in the series, but I keep thinking that with each new book. I thoroughly enjoyed the plot and character development in this story. But before you read any more of this, I must recommend that you start from the beginning of the series. It is just fantastic! In this book I loved how the characters seemed to be coming into their own strengths and personalities. Peyton has been in the FBI for a while but she seems to finally have a better handle on her PTSD. She and Marco are working on their relationship, finally able to find their footing as lovers and not partners. Marco is excelling at being the Captain of his precinct. He seems to managing his injuries better too. Devon is more likeable as a DA (rather than just ambitious). Abe and Jake continue to bring a quirky edge to the story. Marco's team is developing well, handling homicide cases with aplomb and sensitivity. Bambi has changed too, but in an interesting way. I think she bears watching because something may be up! Tank continues to be incredibly smart, resourceful and reliable. And Radar... well, his relationship with Peyton seems to be shifting from team leader to mentor and friend. In this book, we even get to explore Rosa's character as a kickass Special Agent in Charge. ML Hamilton has allowed many of the character to shine in their own way while still dealing with their quirks and issues. The actual FBI case in this book was very interesting and a little gruesome. As for the precinct, there is the ongoing case which just seems to be getting more twisted as well as the murder of a teenager on his way home from school. Such cases are never easy, and ML Hamilton took a lot of care to show the emotional toll these cases have on the police that have to deal with them. Kelley Hazen performs these books with such panache! Each character has a unique voice. Each situation is given careful considered and the performance is crafted so that it reflects the emotions evoked by whatever is happening. Personally I enjoy listening to Kelley Hazen read ML Hamilton's books. Both are artists that compliment each others work! This book was given to me for free at my request and I provided this voluntary review

I really enjoy these Peyton Brooks books. The performance of Kelley Hazen adds so much to the story with her distinguishable voices for the various characters. I thought it was great how this book ended. There were some very unexpected twists in this book. I do not like giving away spoilers in my reviews, and with that said, I did not see the direction this book was going! I love that when an author pulls that off. This book is both a standalone listen and part of a series. I have listened to several books by this talented author and narrator, and will continue to listen to more. I received this book upon my request and have voluntarily written this review. I love this series and have bought the box set that has several of these books in it!

This is Book 5 in the Peyton Brooks, FBI Series but it can easily be enjoyed as a standalone. Listeners of the previous book will recognize that parts of the story are a continuation of that book. It's not often that I wish an audiobook of this length (15+ hours) was even longer, so you know it has to be good! As always, there is so much going on here that the listener is never bored. After a grim discovery, Peyton's case takes her to the Yucatan to investigate. Marco is busy back in San Francisco with two cases of his own. He is also rehabilitating his leg at Peyton's, so there's still hope for those two.

My gosh, I just love this series! The characters are written in such a way that you really come to feel like you know them, flaws and all. The camaraderie between them all is just terrific. The twists and turns will keep you guessing until the end and you'll be rooting for Peyton and Marco to get their relationship back on track. This has everything that I've come to expect from the series - a great story, realistic characters, humor and a bit of romance. The only thing that could make it even better would be great narration. With Kelley Hazen as narrator, problem solved! Distinct, easily identifiable characters and wonderful pacing and emotion have become her trademark. She always manages to deliver a stellar performance. Such an awesome listen! I would recommend Mayan Gods in the Yucatan and the rest of the series.

I was voluntarily provided this free review copy audiobook by the narrator and found it very entertaining and intriguing. This fast paced plot is supported by very unique and at times flawed characters. Multiple cases are being investigated so there is never a lull in the action. If you like action with some humour, this series is perfect and the narration just adds to the enjoyment. It's hard to turn it off, so you'll be listening to it longer than you intended. I'm looking forward to the next book.

Mayan Gods in the Yucatán

Peyton Brooks is back and this time her case takes her and her team to the Yucatán. While she’s out of the country, Marco and his team have their own cases to investigate. Full of action and suspense on all fronts. The circle of characters that ML Hamilton has created feel like family to me. I love how the relationships continue to expand and grow. Each book builds on the prior ones and the circle of characters continues to grow. I can’t imagine anyone other than Kelley Hazen narrating the Peyton Brooks books. The unique voices she has created for each of the characters really bring out their personalities. I was given this free review copy audiobook at my request and I have voluntarily left this review.

narrator is mostly good, but....

narrator's accents are so bad, they are a struggle to hear and sometimes sound more like speech impediments than accents.

Author did her research. Great plot.

I was very surprised when I read a story in the news about drug gangs in Cancun hotels, a few days after listening to this audiobook. I like that the author is including real world problems in her plots and that just makes it more interesting. As usual, the performance was excellent. Her portrayal of all the different characters is always consistent and it feels like reconnecting with old friends. Peyton's cases are getting difficult and violent, but I like that she's still moved and affected. She hasn't become used to it or hardened by all those bad things she encounters. I enjoyed this a lot.

THE HITS JUST KEEP ON COMIN'

This is a super series and this book is no exception. There is a philosophical search underlying this particular mystery. The twists and turns span countries and the bad guys are tough to hate when it all comes to an end. This novel is unique in the series in that it focuses more on the dynamics of the Ghost Squad which is really cool. Part of what is so great about the first series, The Peyton Brooks Mysteries, is the relationship among the San Fran detective & police squad. Definitely recommend.

Simply Not a Good Listen. Save your Time!

I have listened to over 200 audio books and this rates as one of the worst across all categories including story line, dialogue and narration. I can only describe it as a cross between a 1970's police sitcom and a soap opera. There is very little suspense at all. In fact, the very first quasi-suspense scene comes 2.5 hours into the book. The first couple of hours being all about who is dating each other in the department and what frivolous projects they are working on. This book is silly to the point where about 90 seconds after a brutal crime has been revealed, the main character is wondering why none of the Cancun detectives are flirting with one of her team mates. Even more disappointing are the stereotypes used in the book. The local Cancun police seem to be taken from the 1950's. I literally had to go back and check that I had not mistakenly bought a young adult novel. The narration is also bad. I felt like I was listening to a 2nd grade teacher reading aloud to the class room.