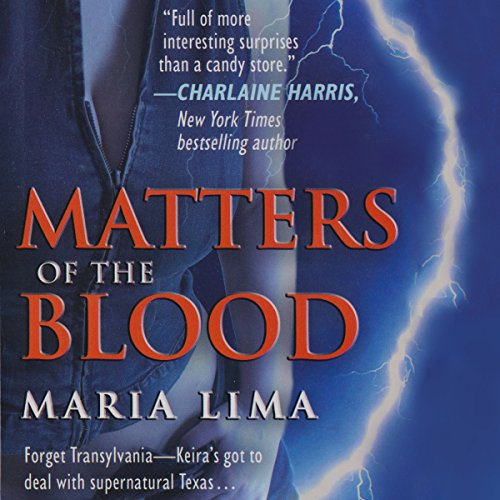 If you thought your family was strange...

A member of a powerful paranormal family, Keira elected to stay among humans in the Texas Hill Country when the rest of the clan moved (lock, stock, and grimoire) to Canada. But family duty means still having to keep an eye on cousin Marty - a genetic aberration who turned out 100% human, poor guy. And recently Keira's been having violent dreams - or are they visions? - featuring Marty as the victim of a vicious murder.

Something sinister seems to be brewing in little Rio Seco. Can Keira get to the bottom of it all while avoiding entanglement with her former lover, Sheriff Carlton Larson? And what does she plan to do about the irresistible and enigmatic Adam Walker?

When this old friend shows up as the new owner of a local ranch and wants to get better acquainted, Keira is more than happy to be welcoming...until she suspects that Adam could be intimately connected to the dangerous doings in Rio Seco.

Whilst I found the story pleasant and easy enough to liten to and follow. The sounds of lorry's, doorbell and the hoover in the background do distract some. I do not think you can beat a professional reader and studio. As a narrator I thought she would be great as she was also the author, understanding the characters but I just could not buy into to her, too woody and personalty. No change in tone or accent for different characters. I love professional readers. It is like being a child again being read to buy your parents at bed time.

I can't in all honesty recommend this audiobook simply because of the author's narration. It is horrible! It's so boring I had to keep listening to parts of the book over & over because my mind would wander & I kept getting lost. It sounds like a librarian reading out loud to children for story hour. This was a really good book & I wish the author would consider having a professional narrator re-record the books. I think I will be getting a refund & will just buy the books on my Nook. Audio books are expensive & people should be able to listen to a narrator who can bring the book to life. I own over 200 audiobooks that I've listened to multiple times because the narrators are more like actors & make it a great experience.

Other than the narration I think the book is definitely worth reading. Save your money/credits & buy the ebook or paperback.

A Good Book RUINED by the author as the narrator

What would have made Matters of the Blood (Blood Lines, Book 1) better?

This is the first title in the Blood Line series and, as firsts go, there is enough here to interest readers into continuing on with the other four books in the series. My biggest problem with this book was that it was 98% hype. Okay I totally pulled the percentage out of thin air, or somewhere else if you'd like, but seriously...just a tad too heavy on hype. We hear through most of the book how powerful Keira is but we never just don't get to see said power put into action. At 38 she is considered young to be coming into her powers and no one is sure yet how they will manifest but I would have been much happier had Ms. Lima done more showing and a lot less telling.

I would have to say Keira is my most, and least, favorite character in this book. I read this title when it was first released in 2009 and knowing how she grows as a character throughout the series really helps turn me away from my desire to throw my MP3 player against the wall at some of her actions. I get the whole near immortal status of the Kelly clan and the plot device of Keira coming into her powers early which is why, I'm sure, Ms. Lima made her 38 rather the 20 she acts most of the time. Okay Keira will live for thousands of years but she is seriously immature for someone who is 38 years old. Running neck and neck with Keira for favorite character is her brother, Ianto. Fortunately, as thousands of years her senior, Ian has developed the maturity sorely lacking in many of Keira's actions.

There is only one thing which could have may the performance any better...a different narrator, ANY other narrator. I get that an author would believe that they know their book and their characters better than any one else possibly could. And while they may be able to write, that doesn't mean that they can perform. And reading a novel is all about performing all the different character roles. Maria Lima gave us one voice, one very bored sounding voice at that. All the voices, all the characters, sounded the same. Excitement, fear, passion, anger, if you couldn't figure out the emotion from the story, you sure weren't going to figure it out by the narrator's tone. Adding inflection, to her, seemed to mean raising her voice occasionally. I can't begin to get across how much I HATED her performance.

What character would you cut from Matters of the Blood (Blood Lines, Book 1)?

There weren't any characters which I felt to be unnecessary to the plotline. If anything, I believe the author should have introduced more of the Kelly clan in book one.

I fell in love with the Kelly clan over the years and I was over the moon when the series finally became available on Audible...that is until I started listening to the author read her book, which I purchased without listening to a sample. I can't begin to express just how much I hate the fact that this title, and apparently the rest of the series, was narrated by the author. It was so awful I truly meant to sit and send an email to the publishers and the author begging them to utilize one of the many narrators or actors who have done such fine work on other titles. I never did get around to it and discovered tonight that the second title in the series, Blood Bargain, is available here on Audible. Sadly Maria Lima is listed as narrator so I, for one, will be using my credits for something else. Almost anything else would have to better. At the very least whatever else I choose, without her reading it, the odds are better that I won't fall asleep while driving, and sail off the edge of a cliff.

Author as the reader...She seemed bored.

I enjoyed the book itself. The storyline and the plot kept me interested enough that I wanted the mystery of the story solved and I liked that part.

Although, it was a trial for me to work through the narration by Ms. Lima. I think a seasoned reader who could have performed more for this book and could have made it more satisfying. I had to struggle with how monotone and bored she sounded and work to stay focused on the story itself.

The story is passable. The characters were not as gripping as I would have like, they were lacking in strength and likability.

I dont intend to be very negative here, I did want to see how the mystery panned out so it was just ok for me. I probably wont follow to the next book though.

This book might be good but I will never now. The narrator's voice is so annoying that I couldn't get into the story.

I really like the story and the people in the story. I understand the Maria Lima reading it and sharing with us the story and for that I am thankful coming from someone who eye sight is not the best anymore. I would have love to have a different narrator but also would love to see all the books put into audio so I could hear all the books because it is a interesting story no matter who the narrator is.

What other book might you compare Matters of the Blood (Blood Lines, Book 1) to and why?

I would really like to see all 5 books in audio.

I read these books years ago and loved them, but this narration was so bad I found myself hating everything about this series. The author uses the same voice for every character, she speaks with a monotone, and the recording sounds unprofessional and grainy. Read the books, don't waste your time with the audiobook.

Would you try another book from Maria Lima and/or Maria Lima?

not if this is how all the books sound.

What was most disappointing about Maria Lima’s story?

i could not get past the narration. I could not even finish the book