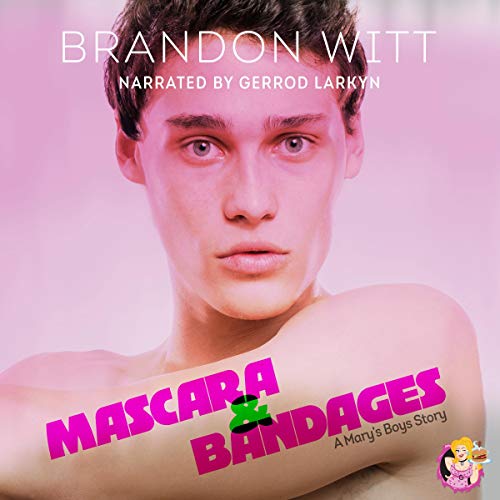 Ariel Merman is a new drag queen who finds a family at Hamburger Mary’s. After a performance as Ariel, Zachary Cooper walks home in his makeup and is physically assaulted by homophobes. Zachary’s worry that the attack has thrown a wrench in his good fortune is eased when he looks into the eyes of his doctor.

Dr. Teegan Chau is a little lost after divorcing his wife and coming out of the closet, but he can’t deny his attraction to the young man he patches up. When Zachary takes the initiative and asks Teegan out, romance is the easy part of their blossoming relationship - as they deal with an ex-wife and child, being a drag queen in a heteronormative culture, Zachary’s lingering trauma, and Teegan acclimating to life as part of an out-and-proud gay couple.

The challenges seem daunting. Can Zachary and Teegan make it through the rough patches and take a chance on love?

What listeners say about Mascara & Bandages: A Mary's Boy Story

I had met Ariel Merman in my previous visit to Hamburger Mary’s and I was thrilled to see she was getting her own book. That excitement was dimmed during the first scene when there was a violent gay bashing. The violence was meant to shock and it did. Zachary was heading home, still wearing his make-up from the drag show when he gets viciously attacked. My heart broke.

Enter Teegan. Dr. Chau is Zach’s surgeon but he’s also drawn to the young man. The first full scene between the two of them was poignant and so it’s wasn’t a surprise they connected. Teegan has an interesting backstory. He has an ex-wife and daughter – both of whom he adores. Splitting with his wife was something really hard but it happened when he could no longer hide the fact he was gay. Connecting with Zach gives him the opportunity to explore that side of him. The chance to share his life with someone of the same sex. Watching that transformation was heartening.

The eventual blending of lives happened seamlessly. Teegan’s daughter Megan loves the Little Mermaid so she’s thrilled Daddy’s new boyfriend does such a great Ariel impersonation. Teegan’s ex-wife Kelly just wants him to be happy so she’s thrilled Zach brings joy to him. The crew at Hamburger Mary’s are accepting as well. It’s just a happy book but the underlying trauma is never far and Zach had to find courage to deal with it. And he did. So I got my happy ending.

Gerrod Larkyn narrates this series and I think he does a great job. I can’t wait for the last book.

This one had me right in my heart. Zachary was just pulling on my heartstrings and I just wanted to protect him. So I love that Teegan and Zach are so perfect for each other. Gerrod Larkyn does another amazing job with this narration. He brings this story more life and I just love it.

Pulled on my heart strings.

Oh man, this book broke my heart and then put it back together again. I find it hard to express my sadness at the senseless violence perpetrated against Zachary. He’s so sweet and lovable. Teegan touched my heart as well. It seems as if his life, prior to meeting Zachary, it seems his life was mostly lived on his parents’s terms. He was not living as his true self. When these two got together I was so happy. Again, I have to say how much I love the fact that the Mary’s clan feels so much like family. These books just keep getting better and better. I can’t wait to start the next one.

Mascara and Bandages is book three in the Mary's Boys series but it can be read as a stand-alone. You won't know a few characters at first but you catch on.
This story deals with a hard topic of gay-bashing and is a little angsty at first. My heart went out to Zachary and I just wanted to protect him though he is stronger on the inside than he appears. I loved this character development.
I loved that Teegan too was dealing with his identity in an entirely different way.? The two men just seem to belong together.
The story is sweet with some violence some heat and a lovely romance.
It's my favorite in this series so far, each gets better and better.
If you like drag queens, doctors, cute kids, overcoming trials and tribulations and some hot man-sex you will love this.

Audio Review. I loved this as a book and it was a favorite. The More I listen to Gerrod Larkyn the more I love his narration. He is really brought Zachary and Ariel Merman to life. but more than his voices I love his tones, excitement the way he brings each sentence to life as we would speak or shout or explaim and not just read. Loved it and he nailed it!

This one starts backstage at Hamburger Mary's...

as we meet Ariel Merman otherwise known as Zachary Cooper, when the make-up comes off.

While readers have met Ariel/Zach in previous stories, just like Zach it's not until this story that we meet Dr. Teegan Chau when Zach is the victim of a hate crime that results in him being taken to the hospital.

Sadly what happens to Zach could easily be the headlines of newspapers across the world. Too often the inspiration for fiction can be drawn from reality and while I'm only going on supposition with this thought...I wouldn't find it surprising...sad, but not surprising to learn that this was the case for Zach's story.

For Zach unlike Cody or Vahin the staff at Hamburger Mary's has become his family not because his family wasn't awesome. Zach grew up with loving and supportive parents...unfortunately Zach's parents are no longer with him. While Teegan has an excellent relationship with his ex-wife, who wants him to get on with his life and be happy. His relationship with his parents isn't quite so simple. They love him...just not all of who he is and when he tells his parents about Zach...sadly in my eyes they fail him.

'Mascara & Bandages' for me worked a whole lot better when it came to the relationship between Zach and Teegan. Things took time to develop between these two men and there were obstacles and a set back or two but both men were willing to keep trying until they got it right.

I loved that Teegan was supportive of Zach without being overbearing and turning Zach into a 'damsel in distress waiting to be rescued by a knight in shining armor' just as I loved that Zach showed a core of inner strength and faced whatever challenge came his way no matter how scared he was internally he put on his big boy pants and did what he felt he needed to do. Being scared isn't wrong nor is it a sign of weakness it's how that fear is dealt with that truly shows what a person is made if. For Zach the fear kept him cautious but he never allowed it to truly rule his actions.

Once again Gerrod Larkyn has provided the narration for this story and with each story Mr. Larkyn's voices are becoming more consistent and I feel like he's becoming more comfortable with the characters as he gets to know them better and brings them to life for the listener.

While the previous stories were enjoyable 'Mascara & Bandages' is just a step or two ahead in that I enjoyed the romance as much as the rest of what was happening in the story and everything seemed to hold a better balance.

Not my favorite book.

Zachary is a drag queen at Mary's. After finishing a show one night and not bothering to remove his makeup from the show walking home turns into a hate crime.

Dr. Teegan Chau is the doctor over Zachary and he's drawn to him from the beginning.

After a lot of awkward a date occurs between then and it's like 2 puzzle pieces that fit together. Everything Teegan thought would run off Zachary doesn't and everything Zachary thought would run off Teegan doesn't. Once they both get over the awkwardness and insecurities they manage to make a relationship work.