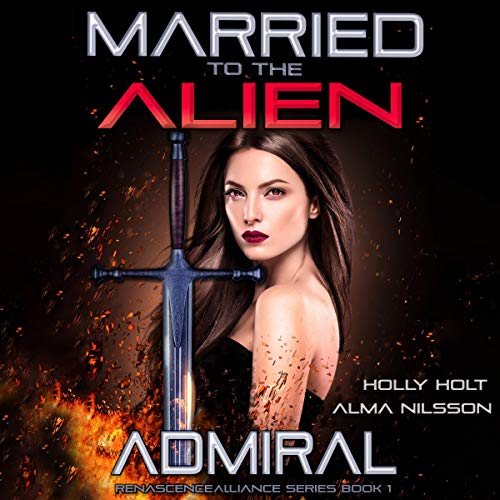 Married to the Alien Admiral

By: Alma Nilsson
Narrated by: Holly Holt
Try for £0.00

Humans are the most adorable creatures in the galaxy.

Is it such a surprise that a mighty Alliance Imperial Warship would take humans prisoners? Yes, the Alliance doesn’t take prisoners.

Once onboard the Alliance ship, the crew of the Dakota are casually informed that human women are now considered to be Alliance citizens. Moreover, all the female crew will be returning to the Alliance homeworld.

This was completely unexpected. What is even more unexpected, Captain Kara Rainer’s infatuation with the alien Admiral who captured her and coerced her into marrying him.

When the chance to escape presents itself, will Kara take it or remain with her alien husband who she has become smitten with despite his insistence on trying to ‘tame’ her into Alliance culture?

This audiobook contains explicit romantic scenes with an alien for mature audiences.

What listeners say about Married to the Alien Admiral

Let me say from the start, I love this Alliance series. I love the world-building the characters and everything. However, I have listened to this series out of order and if I had listened to this book first I would not have continued. The narrator must be very new and perhaps this is her first book narration. There are quite a few mistakes by the narrator at one point, about ten minutes worth and I almost stopped listening, but I was doing the housework and I have listened to the second book in the series by the same narrator (but she does a better job but still with some mistakes) so I assumed the rest of the audio would be okay and it was. But I must say, I am pleased that Ms. Nilsson switched the narrator after Book 2. The second thing about the narrator, she reads very slowly and I realised quite quickly that this was a fast-paced book so I listened at 1.5 speed which was better. As to the story itself, it was not my favorite. My favorite is still Jade and her three husbands in Book 6 and then second, Book 4 with Jane. I have not listened to Book 3 yet (as I said I am doing this all out of order, but the author says that's okay and she is right you can read/listen to this series in whatever order and in some ways knowing before knowing, if you will, is beneficial as there are no boring recaps and it's like getting to know a new group of friends and finding out the gossip through different people. Would I recommend this book? Not when I have listened to the others. Maybe this is why Ms. Nilsson says you can start at Book 1 or Book 2. I would recommend starting at Book 2 or 4 or 6. I started at Book 6 and it was no problem. However, one thing that I think you miss in this book because it's not apparent unless you have listened to the others is that this alien empire is a place where men are second class citizens and the whole place is run by women. This becomes clear halfway through Book 2 and I thought it was very clever. And clever here too, but probably so subtle as they are never properly in the empire in this book that people miss that important clue if they haven't read the other books and if you don't know that it might make some of Tir's behaviours and thoughts strange or you might think it's bad writing on Ms. Nilsson's part, not realsing he comes from a place where he sees women as above him in everything and that he is counting on Kara not only to be a strong woman but to help him in the revolution that is coming Book 8. I would start much later in the series, as I do love this series and the world-building is impeccable, but this book is by far the weakest.

I can't even enjoy the book because the narrator is so horrible. Her tone, inflection, and character voices take away from the story instead of adding to it. Im so distracted by the poor narration that I can't enjoy the story. I am trying my hardest to get through this narration because the story sounds interesting but i just cant. I think I am going to return the Audible book and read it in Kindle. Read this book if you must experience the story, just dont listen to it.

Not the best place to start this awesome series

I first want to share my thoughts about the Renascence Alliance Series (I’ve read book 1 to 6 so far)
I’m really impressed by this series.
World and character building are excellent, it’s mature, serious and believable.
Some books in the series have more drama, others are a bit more lighthearted.
All are super romantic and with hot sex scene’s.
I’m so grateful I got the opportunity to review these books and discover this awesome series!
I enjoyed it so much and I'm definitely gonna listen to the series again in the future,

Each Book had a different Main Character (and therefore lent themselves pretty good to be read stand-alone)
There is a common thread though, and you meet people from previous books and books to come.
Almost each book has a different narrator. I personally LOVED the narration in Book 3, 4 and 6.

Now back to Book 1 ‘Married to the Alien Admiral’.
It feels a bit as the ‘odd one out’.
All the other books are Sci-Fi - Romance with Erotica, but book 1 is more Erotica - Romance in a Sci-Fi setting.

In my opinion this is not the best written or narrated book in the series, and therefore I wouldn’t recommend you start the series here.
It doesn’t represents the quality and feel of the series as a whole (and you might give up on this great series before you discovered it’s awesomeness, and that would be such a shame!)

I honestly think you (like me) will enjoy and appreciate this book a lot more after reading some of the other Books first and return to it when you’re already loving the series (and Kara).

Now to Narration. Alas, it wasn’t for me.
Holly has a good voice which is nice to listen to.
But to me it feels like she is not emotionally connected to what she’s reading.
Everything is read in somewhat the same tone/ way, with the same intonation regardless of context and/or situation.
To me this performance feels non-genuine, disconnected and cold and I don’t like this way of narrating at all.
Some of the other books in this series have such excellent narration, it pains my heart a bit this one hasn’t.
I would have enjoyed this book more when reading it myself as apposed to listening to the Audio Book.

My recommendations for reading/listening order of this Series :
- Book 1 : Skip this one and come back to it later.
- Book 2 is a good place to start, but I personally didn’t like the narration at all, so if you’re sensitive to that (like me), book 3 might be a better place to start.
- Book 3 was such a delight! Excellent narration, super romantic and highly enjoyable.
- Book 4 is a more emotional read, but IS very good and important to the Series.
- I think Book 5 (like Book 1) could easily be skipped and read afterwards. (it’s a Novella)
- Now to my personal favorite.. Book 6. I think the best book in the series yet, and I enjoyed it SO MUCH!
Super romantic, excellently written, feel-good. This book really made me a fan of this series.
Trust me, you don’t want to miss this one!

I got this Audio Book for free (thanks!). I'm voluntarily leaving this review.
Opinions and ratings are my own and not influenced by how I got the Audio Book.

Ended up returning this book after 2 PAINFUL hours listening to the narrator ruin what little of a story there was. There's a disconnection between the characters, situation and storyline. The narrator sounds like she's reading from a cereal box. Made the book bland and cold.

I love a good sy-fi book, but this was unbearable. its like listening to a textbook. vulva and vagina are used and supposed to be sexy, not. The narration was bland toneless and stilted. I even skipped forward through the book, to see if the storyline made it worth listening to, but no. it was just a badly written story. I will not listen to this author again. this book will be returned.

Overall it was a pretty good book. The narrator isn’t the best. About an hour in it gets better. There are a lot of points in the book where there could have been more info given mostly about the gods rules. It’s definitely worth listening to! By the end you will want to listen to the next in the series.