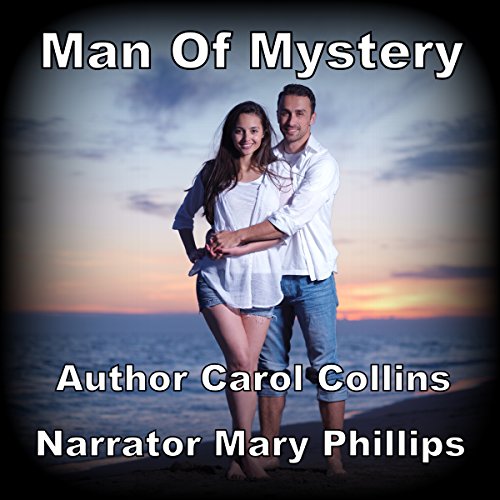 Exactly who was the mysterious stranger who caught Joanna's eye and instantly had such an incredible effect upon her senses? On holiday with her twin brother Paul, she was minding her own business, sipping an iced drink in the lovely old town of St. Malo, when the impertinent blue stare of a rather disreputable looking busker totally unnerved Joanna. She tried to flee from him, but fate decreed they should meet again, in circumstances where she felt forced into giving him aid.

Within days, Jake had won her love, but Joanna was soon to discover the awful truth. Her penniless drifter had deliberately lied, cruelly deceiving her as to his real identity. Angry and hurt, Joanna vowed revenge.

What listeners say about Man of Mystery

not your typical 'Christian romance'

This book is a little hard to rate. I enjoyed the story line and wanted to learn more about this 'man of mystery', however it is a bit on the edgy side. There are curse words and the mention of sex many times. It is not your typical christian Romance. There is the mention of God and salvation so I guess it is not your typical secular romance either. Jake is a perfect man of mystery and the chemistry between him and Joanna is undeniable. I enjoyed their combative personality. I was given an audible version of this book and the narration is well done. The main characters of this book are from London and the narrator has a British accent which adds to the book nicely.

Carol Collins book is a simple story that depicts all the angst and impatience one might find in young love. The plot is believable and the characters are realistic. Both Joanna and Jake are flawed characters with life experiences and personalities that challenge the way they approach their budding relationship. Despite what the title might suggest, there is no sudden suspense or drama. The story moves along quite smoothly and naturally.

I particularly enjoyed Mary Phillips narration. She brings the characters to life while maintaining a lyrical quality that makes for easy listening.


This review copy audiobook was provided by the author, narrator, or publisher at no cost.

This book was an easy listen especially with the voice of Mary Phillips. Great to listen to while getting things done because it's not so complicated that you have to listen to every word.

An uplifting narration by Mary Phillips of a story about the lives and loves of everyday people . There is a little magic in all of our lives, we just have to recognise it and cherish the moment.

Jake made the story Joanna was childlike

This was an interesting listen of a woman who had been hurt in the worse way from the man she thought she loved. She moves on never going to make that mistake again. I wouldn’t say she is a snob even though she does come across as one from time to time. I even understand why she thinks the way she does for the most part. There is nothing worse than being used by another person getting what you want and throwing you to the side.

Ms. Phillips narration was wonderful. I just love her accent as I got lost in the story her voice adds so much to the listen. This is the second audio I have listen of hers I love her character voices you have no trouble knowing who is talking or it is male or female. She gives such wonderful emotion to her voice you are never left guessing to what each are feeling. There was no background noise or any place where the volume was higher or lower than any other place in the audio. Ms. Phillips gives you a very clear, clean audio that pulls you in. I could picture the ocean as it comes in and out as the narrator voice takes you away from one scene to the next you picture each one in your mind. I can’t wait to listen to more from this narrator her voice is so pleasant you forget you are listening.

The author gives you a nice story of pain, hurt and sorrow along with secrets he is hiding. Once these comes out can Joanna forgive Jake or will she make him pay? Will she take her revenge or will it back fire on her? I had no trouble feeling the pull between Jack and Joanna from their first eye contact the author and narrator really pull you in. I loved Jack from the start but I do feel I would have felt the same as Joanna did from the start. Joanna I had a love hate relationship with at time she was very likable and other times she just seem so childlike. I thought she over reacted when her brother tried to help her from being hurt. She was an adult and made her own choice but she blamed him because she was to hot head to think things through. At time I like her but at the end I didn’t care for her at all.

This was a good story with a great plot it is believable I have no trouble seeing something like this happening. For me this isn’t the best work of this author I have read others I enjoyed more but it still was a good story. The author gives some great touching scenes that does hook you. She did throw me at the end with the Christian part since that wasn’t anywhere else in the story. It sure isn’t your typical one but adds to the read.

I got this book via audiobook boom.com. This is Jake and Joanna's love story. It is filled with things that are slightly unbelievable. If you already think this man is a homeless vagabond why would you invite him to stay with you and then remain alone with him while your twin brother goes out dancing? You still don't like or trust him but you take all of these chances. Then when you finally fall in love with him you get mad when you discover that he is not a vagabond but a millionaire and he did not tell you. This is one of those stories where you have to truly suspend reality and just go with the flow. The narration was very good and kept the story flowing. It was a nice story to pass the time while I was crocheting. Because the story is about British citizens some of the words were strange but after a while they were explained so that I knew what they were talking about.

An okay listen with a mild twist at the end

Once you get past the very pedestrian cover art, this listen had some very good elements. The main female, Joanna, was a bit full of herself but the story did try to make her sympathetic.

The mystery was only barely. You pretty much knew the tie-in early on. The meat of the story was getting to the HEA.

Speaking of...the HEA had a bit of a twist. It wasn't a story line twist, just a pivot of the main male character, Jake. It was a bit jarring, since there was no build-up to that revelation, but it played well with the HEA.

The narrator was good. Truth be told, she was probably the reason why I gobbled up the book in one sitting.

It was an okay listen; not much of a mystery; a satisfying love connection; and a HEA with a twist.

Like many of the authors other books, I found that I enjoyed this one too, Joanna (the main female character) I felt like slapping at times but we humans do act in different ways and this is the way she dealt with her problem.
I loved it and would highly recommend it to those who love clean romance with plenty of tension.

I loved listening to Mary Phillips accent as she helped bring this story to life. This was a really sweet story even with the heartbreak and everything else mixed in. I love hearing about the bad boy who decides that isn't for him and he'd rather be happy. The bit of twist to the story just makes it better in my opinion. There were parts that were a bit predictable, but its a romance and you can't really get around it. Great story and happy I've had the chance to listen to it.