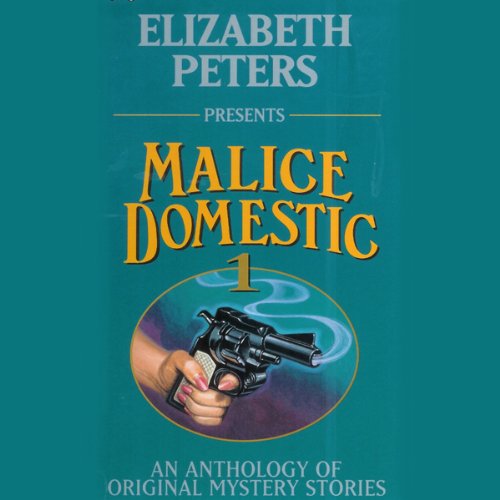 Malice Domestic distinguishes the personal and private aspects of crime from the public and impersonal. Our murderers don't kill for the fun of it (serial killers) or for a misguided ideal (assassins and terrorists) or for pay (hired hit men). They only do in people they know and love (or hate).

"Traditional mysteries and the short story form have been a perfect pair since Poe and Conan Doyle; this outstanding collection of original tales carries on the combination of genres." (Publishers Weekly)

What listeners say about Malice Domestic 1: An Anthology of Original Mystery Stories (Unabridged)

This is a really excellent collection of mystery short stories. They are, without exception, well written and interesting. I liked the collection so much that I have bought the second volume.

These short stories were written by the most popular authors of what are now called "cozies ." Some of them feature their series detectives (Carolyn Hart's Harry O and Charlotte MacLeod's Sarah Kelling), but others wrote about new characters. Most novelists were very successful writing this length, but a couple of the stories seemed to end somewhat abruptly, as though they wanted to be novellas.
I particularly enjoyed MacLeod's over-the-top dialogue, full of alliteration and arch and erudite phrases. It would have been tiresome in a novel, but was fun in this small dose. Unfortunately, the narrator was unaware of the stylish twist or was unable to carry it off.
I thought the narration was the weakest part of the book. Perhaps the stories should have been narrated by those who regularly did each author's books. Even so, I recommend these stories to readers who enjoy well-plotted, well-written classic mystery stories.

7 of the worst from the 14 in print editions

7 of the 14 books in the print editions are presented in this supposedly "unabridged" audio version -- the worst of the 14 so far as I can tell. Most are by little-known authors -- in some cases, apparently for good reason. The Charlotte McLeod entry may be the worst thing she ever wrote, Sarah Kelling in first person, trumpeting that she's never wrong about every third paragraph in a story I found inane. Diane Mott Davidson's "Cottonwood Caper" story, told by Goldy the caterer's son Archie, is ruined by a narrator whose idea of how to present a sub-teenaged boy varies from nasal honk to screechy -- well, screeching. And I thought it was one of her best, so sadly ruined. P. M. Carlson's "The Jersey Lily was not to my taste but one of the more bearable stories, and I was delighted to discover Carolyn G. Hart's Henrie O story -- Henrie O has 7 meticulously crafted (sometimes to the point of tedium) well-narrated full-length books in the Audible compendium. Missing? Joan Hess. Aaron Elkins. Sharon McCrumb. Ellis Peters, among others.

Entertaining collection of Tales, but flawed

The Malice Domestic series has has nearly 13 books in it (not counting a few other editions outside of the numbering system). It was for a while a very popular anthology series and it has a lot of authors who either were already popular or were becoming popular (Diane Mott Davidson had only one book out when this collection premiered). The premise of this anthology series is presenting a wide range of more cozy mysteries and stories about love and friendship turning deadly. Malice Domestic 1 came out in 1992 and has several reprints and new editions as well as several different audiobook editions. That in part is a problem as some stories that appeared in the 1992 edition are not redone in this edition. I suspect, though I have no proof, that some stories ran into contractual disputes and other issues.

The 2009 edition of the audiobook series clearly is drawing on an earlier recording which causes some formating problems and audio problems. Some of the stories have poor recording quality and static, the system for breaking the stories into separate chapters was also bungled, and some of the voice actors have problems as well, and then there are the musical interludes. The 1980's and 1990's was an era for a lot of audio mysteries to use stringed instruments as intro, outro, and interlude music this happens here and in some places it is so over bearing you can not hear the voice actors or some of the words without a little struggle. It is often much louder then the rest of the audio so it makes listening with headphones difficult. The audio in other words has some real problems.

As this is a collection of stories with several different voice actors I feel it is better to break down some quick reviews in order:

Happiness is a Dead Poet by Sharyn McCrumb: A very tart comedy mocking writer conventions where a mystery writer finds herself trying to solve a murder. The comedy at the center relies a lot on mocking different genres of writing and the fans of those genres. Good voice acting and reading though I can't help but wonder if the author would have wanted the narrator to be more sardonic. This was a terrible choice for the first story in this audio book as its poking fun at mystery readers and the tropes of mystery fiction as much as it mocks pretentious poets and romance novels (This author seems to detest romance novels for reasons I can not fathom). I do not know if it was the first choice in any of the print editions. However, while an interesting premise it felt oddly mean spirited as a place to start a mystery anthology.

Henrie O.’s Holiday by Carolyn G. Hart: I enjoyed this one a great deal. I had not read Carolyn Hart before but I went and bought the first book of the Henrie O series on the strength of this short story. A solid little take on the "traveling to tropical island" mystery tale with a fun little twist. Well paced, amusing voice acting, and entertaining and good voice acting. I enjoyed the solution to this mystery and the characters were excellent.

Take Care of Yourself by Janet LaPierre a creepy little take that is tonally different from the other stories in this collection. A little darker, a lot more suspenseful its written as a cat and mouse game where you wonder which of the two narrators is really in control. The ending works but it is a harsh little tale of suspense. I liked it a lot but it is tonally different from the others.

The Perplexing Puzzle of the Perfidious Pigeon Poisoner by Charlotte MacLeod another in the more comedic and light hearted stories the Perplexing Puzzle was a charming little story hamstrung by technical issues. The story itself is a fun little mystery that was more concerned with solving a daring theft of jewelry. It clearly was an homage to word play and comedy work like P.G. Wodehouse relying on clever and complex word usage. Sadly the voice actor reads the story very quickly, I had to rewind several times to understand what she had been saying. She is clearly trying to deliver the lines of the story in an amusing fast paced manner but it all felt very rushed and a little too frenetic. I blame the problem more on the director who didn't tell her to slow down and the poor audio quality of this recording for the issues and its a shame as the story itself is very amusing and fun.

The Ties that Bind by L. B. Greenwood: a solid and well voice acted little story with a slight acidic zing. A good puzzle, a lot of well realized characters, and an interesting twist on the dinner party mystery sub genre. This dinner party is at a backwoods cabin with no plumbing. I found it cute though it is not my favorite in the anthology it was entertaining and I think the author perfectly captured a southern summer mystery.

Night Visitor by Audrey Peterson a classic little puzzle with an excellent voice actor. Good performance, good story, a little short but overall a good part of the collection. Not a lot to say as it is the shortest tale but and interesting tale.

The Jersey Lily; or, Make Me Immortal with a Kiss by P. M. Carlson: This story is a historical mystery set in the 1890's and uses several famous people of that era as key characters. More of a throw back to old adventure tales of clever characters tricky and out witting opponents. The mystery takes a distinct back seat to the tribulations and adventure of the narrator. I really enjoyed the story as it has a creative look at its era, a lot of interesting characters, and a solid plot. I suspect some people would hate the main character but I like clever manipulator types and this one delivered a good little story. I'd love to find more by this author. The voice actor does wonderful inflection and accent work and made this story feel like a little radio drama.

The Cottonwood Creek Caper by Diane Mott Davidson: the final story in this version of the anthology. A story from the perspective of an elementary school child who stumbles upon a body and unravels the mystery. This is actually part of the Goldy Bear mystery series and takes place between Catering to Nobody and Dying for Chocolate the protagonist this time is Goldy's son Arch. I think this proves Davidson can write very interesting stories from other character's s perspectives. She does an excellent job capturing the voice of a young boy in the fifth grade who is a bit of a social outcast. Getting the story from Arch's perspective in how he finds the murder, how he goes about alerting people while trying to avoid getting into trouble, and how he solves the murder all works well. An interesting tale in itself gives good insights into Arch and its nice to know Davidson recognizes and is critical of Goldy's sometimes overbearing habits. The voice actor tried hard to deliver the voice for arch but I think they were a little to nasal and got annoying at times. Odd affect choice and I again have to wonder who was directing these recordings.

So overall a good collection of little mysteries. Some interesting ideas trying to fit in the theme. I had a lot of fun with this but it has distinct flaws and the claim it is Unabridged is questionable in the extreme as the audio is missing these stories that appeared in the 1992 original printing of the story (according to Good Reads)
An Idea Whose Time had Come by Elizabeth Peters (the editor of the collection)
Windkill by D. R. Meredith
Angel on the Loose by Valerie Frankel
Nice Gorilla by Charlotte and Aaron Elkins
The Last to Know by Joan Hess

You will be entertained and the price is worth it. However, it is best to be aware of these facts before purchase