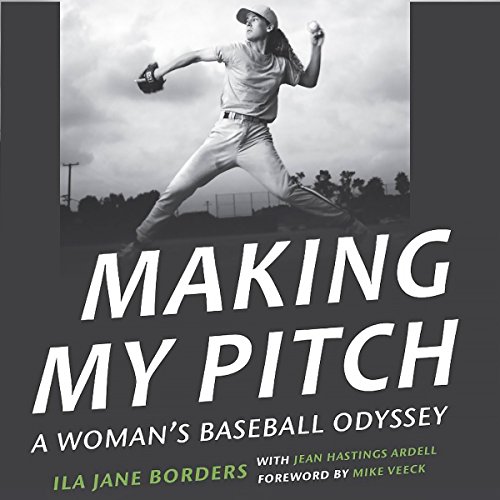 Making My Pitch tells the story of Ila Jane Borders, who, despite formidable obstacles, became a Little League prodigy, MVP of her otherwise all-male middle school and high school teams, the first woman awarded a baseball scholarship, and the first to pitch and win a complete men’s collegiate game. After Mike Veeck signed Borders in May 1997 to pitch for his St. Paul Saints of the independent Northern League, she accomplished what no woman had done since the Negro Leagues era: play men’s professional baseball. Borders played four professional seasons and in 1998 became the first woman in the modern era to win a professional ball game. Borders had to find ways to fit in with her teammates, reassure their wives and girlfriends, work with the media, and fend off groupies. But these weren’t the toughest challenges. She had a troubled family life, a difficult adolescence as she struggled with her sexual orientation, and an emotionally fraught college experience as a closeted gay athlete at a Christian university.

Making My Pitch shows what it’s like to be the only woman on the team bus, in the clubhouse, and on the field. Borders ultimately relates how she achieved self-acceptance and created a life as a firefighter and paramedic and as a coach and goodwill ambassador for the game of baseball.

"An inspiring and important account, told with grace and self-awareness that will appeal to baseball and sports fans..." (Library Journal)

“A riveting, deeply personal story and a compelling addition to the fast-growing literature on American women in baseball.” (Jennifer Ring, author of A Game of Their Own)

“Everyone needs to read this book.” (Leslie Heaphy, coeditor of The Encyclopedia of Women and Baseball)

"Karen Commins narrates this memoir by Ila Borders, a pioneer in baseball, with unwavering enthusiasm.... Commins gives every aspect of Borders's life the right emotional touch - from her gritty commentaries on the mound to the tragedies and challenges she endured off the field.... Borders's story is an important one, and one told with genuine reflection." (AudioFile)

What listeners say about Making My Pitch: A Woman's Baseball Odyssey