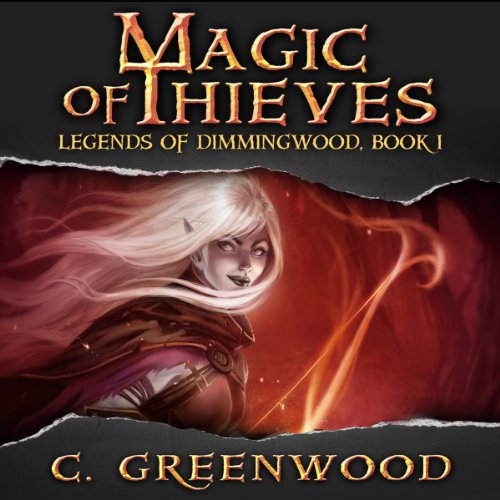 By: C. Greenwood
Narrated by: Ashley Arnold
Try for £0.00

In a province where magic is forbidden and its possessors are murdered by the magickless, young Ilan has only one hope for survival. Concealment. In the shadow of Dimmingwood, she finds temporary protection among a band of forest brigands led by the infamous outlaw Rideon the Red Hand. But when old enemies reappear and new friendships lead to betrayal, will Ilan's magic and the power of her enchanted bow be enough to save her?

What listeners say about Magic of Thieves

nothing special, bought all books and regretted it

boring, no magic no figthing and just a plain girl and an annoying story narrator

I think the story might be good, if not for the narrator. Very monotone, odd cadence and pronunciation of some words. It shows that a good story can be ruined by a poor narrator 😒

What did you love best about Magic of Thieves?

I enjoyed the tale and the characters. I felt like they were acquaintances after the first few chapters.

What other book might you compare Magic of Thieves to and why?

This is where I found the biggest fault with this production. The narrator lacked any semblance of emotion or ability to inflect her voice to show the difference in feeling coming from the parts read. Also, disappointing was her lack of vocabulary and mispronunciation of several words repeatedly. I would relate her narration to a monotone with no feeling.

Yes. I was able to finish listening to the story in one sitting while I groomed the dog.

I really would like to read the next book in this series but I would rather not hear it read to me by this inadequate narrator.

Didn't spark any feelings or emotions.

It's hard to tell if it is the story or the narration, but I do not get any feelings or emotions when listening to this story. The cover makes the story look cool, but the narration is kind of flat and it made it hard to stay interested. It was hard to tell which sentences had exclamations, which sentences were meant to convey sadness, thrill or anything. It felt like listening to a monotone lecture. I was very disappointed in both the story, which seems to progress slowly and the narration. I am still not sure where the story is leading the reader to. I think I will try to pick up this up again in a month or two and read it on my Kindle rather than listen to it and see if makes a difference. If I wasn't so hard-nosed about finishing books, this would have probably ended up on my DNF list, if I had a DNF list.

The author needed to have an editor or a critique partner tell him to deepen the story. I found myself listening and thinking "wait that doesn't make sense" or "I know I should feel empathy toward the protagonist, but she is really just a jerk. If he had expanded on the relationship the protagonist and her surrogate father had, then I would have been a bit more emotionally involved with the story. Instead, I felt myself not able to be drawn in because of the lack of empathy I had toward the protagonist.

Would you ever listen to anything by C. Greenwood again?

I had already purchased the second book in this series and I am going to listen to it, and I truly hope the short-falls that plagued this novel are corrected in the second. This story had the potential to be excellent.

Did Ashley Arnold do a good job differentiating all the characters? How?

Yes she did a fine job with her part in reading.

If you could play editor, what scene or scenes would you have cut from Magic of Thieves?

I would not have cut them so much as modified and enhanced some of them. As in her relationships with people. She is at times kind then in the very next scene, she is a complete witch to these people who she was kind to a moment before. That made it very hard to empathize with her.

Make the protagonists character more consistent. I could not decide whether I was supposed to like and empathize with her or if I was supposed to hate her. So, in the end, I ended up not liking her and being very disinterested in whether she achieved her goals or died in the attempt. I truly wanted to like this book but I just couldn't.

I would recommend it to a younger person. It is what I consider to be a "light/fluffy book". it is entertaining, but doesn't have much depth.

Which character – as performed by Ashley Arnold – was your favorite?

I was impressed with all of the characters.

Was Magic of Thieves worth the listening time?

Since I was doing other things while I was listening, yes. I could/would not have devoted my entire focus to this book.

Narration needs work! Alexa has more expression in her voice and she's artificial intelligence! Lots of mispronounced words and sentences not in the book. It's like this person has trouble reading chapter books. I thought she would improve in the second book of the series, not. Third book, still crap. Will read the remaining books myself so I can at least enjoy the story.

A young child taken in by a thief.

Magic of Thieves
Legends of Dimmingwood, Book 1
By: C. Greenwood
Narrated by: Ashley Arnold
This had it's moments that were pretty good but most was just a kid taken in by a thief. His boss tells him to kill her but he doesn't, the other thieves seem to cheer up with a little one around. Boss says she can stay. It's her life growing up, interactions between the guys, and she has to hide that she has magic, it's illegal. ( Not that they are doing anything wrong by murder, rape, pillage,..)
The narrator was excellent.

The story is shaping up to be a great one but the narrator is too mono-toned and robotic. She shows a lack of emotion in the characters and her voice seems unable to show distinction between genders.

liked it good read fast paced action
a well balanced story . I would recommend to everyone