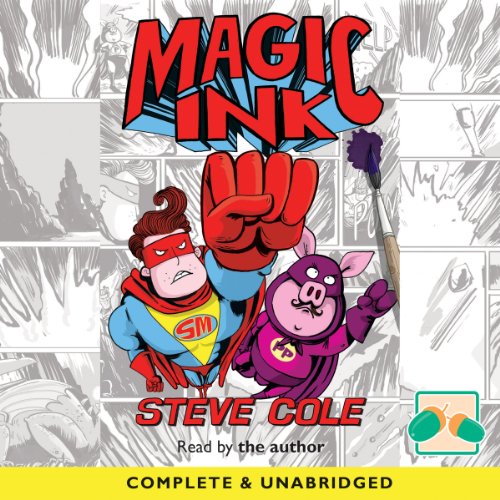 Stewart Penders is a 12-year-old kid who loves comics and loves drawing the adventures of his fantasy alter ego, Stupendous Man! His granddad, who was a great comic book artist, has just died, leaving his house and its contents to Stew’s family.

But when they move in, they are greeted by a pig in a top hat running amok through the house. When Stew explores the house later, he finds a discarded comic strip in the attic - featuring an image of the very same pig they just saw - and beside it a mysterious pot of ink. When Stew starts drawing with it, his artwork springs into life and so begins an hilarious adventure.

What listeners say about Magic Ink

My 8 year old is an excellent reader, but found the text version of this at the library too much (he picked it as he's a fan of Astrosaurs; much easier). It is a lovely book with lots of illustrations and comic-book style inserts and he begged me to get the audiobook, so he could "finish" the story.

Steve Cole isn't my favorite narrator, but actually he voiced this book far better than others (oink!). It's the story of a 12 year old comic-obsessed boy, who accidentally discovers a magic pen and ink. His comic creations come to life.

This is obviously for an "older" audience than Astrosaurs / Slime Squad etc as there is a hint of moralizing; a grandfather who wasn't the man they thought he was, the concept of duty etc. However it doesn't detract from the usual mad cap Steve Cole style action. My 6 year old was cheerfully dragged along (some of the rubbish medieval super-heroes he found hilarious).

All-in-all a good buy. It's worth trying to get hold of the paper form though. Even just to tempt a reluctant reader into giving it a go.