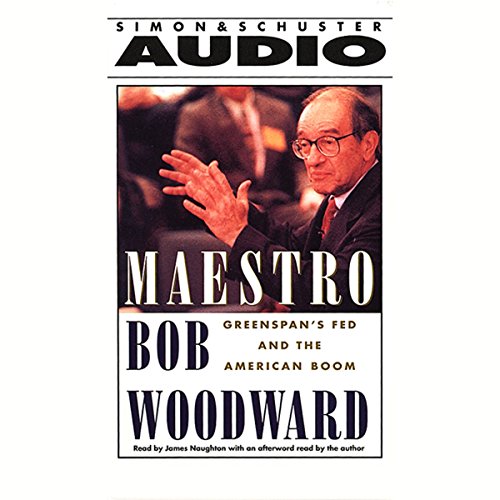 Perhaps the last Washington secret is how the Federal Reserve and its enigmatic chairman, Alan Greenspan, operate. What do they do? Why precisely do they do it? Who is Greenspan? How does he think? What is the basis for his decisions? Why is he so powerful? What kind of relationships has he had with Reagan, Bush, and Clinton - presidents during the 13 years he has been Fed chairman? The Greenspan years, 1987 to 2000, are presented here as a gripping, intimate narrative, a remarkable portrait of how one man has become the symbol of American economic preeminence. Maestro reveals a fascinating intellectual journey. Greenspan, an old-school anti-inflation hawk of the traditional economy, was among the first to realize the potential in the modern, high-productivity new economy - the foundation of the current American boom. Reappointed by Clinton in 2000 for another four-year term, Greenspan is slated to serve as Fed chairman until 2004. He is not only a major figure in the world's economic past, but is central to its future.
©2000 Bob Woodward (P)2000 Simon & Schuster Inc., AUDIOWORKS is an Imprint of Simon & Schuster Audio Division, Simon & Schuster, Inc.

"Replete with the sort of fly-on-the-wall reporting for which [Woodward] is known...Woodward shows the Fed chairman's unusal skill at political power games." ( Business Week)
"Fascinating and instructive." ( AudioFile)

What listeners say about Maestro

History will remember the greatest evidence of Greenspan's unnatural ability to shape outcomes that rely directly on uncontrollable forces as the fact that he got Woodward to write a sympathetic book about him.

I love Woodward, and there’s nothing wrong with this book. In fact, I think that it correctly focuses on the core issues, something that others do not do very well. But it’s not one of his best books. Had it been written after the bubble burst (instead of seconds before it burst) and after 9-11, it probably would have been one of Woodward’s best books?

One wonders if a second edition which included Greenspan’s final term could transform this book from good to great.

A must read for anyone in the markets. I have gained a new level of respect for the man and the process he helped shape.