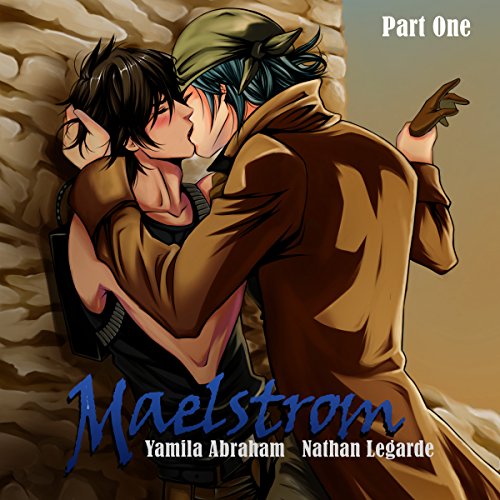 By: Yamila Abraham
Narrated by: Nathan Lagarde
Try for £0.00

Demetri knows giving in to Malstrum's desires will protect his band of miners, but the heterosexual Earthling will struggle with violent courtship rituals on a planet devoid of women.

Demetri messed up in the military and now must serve as a miner on Earth's ally planet Secren. This is the last place he wants to be. Earth men are considered small and cute to the violent Secren men. Demetri already ran a mine on the ice world Donovan. This gives him enough notoriety for mine overlord Malstrum to take an interest in him.

It seems cut and dry that he's going to rebuff Malstrum and make it on his own, but Secren is a brutal world. The male population are all slave miners desperate to reach their quotas. As an Earthling Demetri is an easy mark to get robbed or killed.

Giving in to Malstrum is the only way Demetri can survive. The charismatic mine overlord decides to make it easy for him.

What listeners say about Maelstrom 1

I like it so far . I wish it could have been more of the story. I already have all the books and like to read them along with listening to them too. Hoping for some more to come out soon

I loved it.
I love the books and this was great I can't wait for the next one.

Maelstrom is one of my favorite series by Abraham, and the addition of a narrator makes it even more of a treat. Lagarde has an excellent voice which helps bring these characters to life believably. I'm excited for the next chapter!

Used to be Free under the Romance Package.

I would give 5 stars both overall and in story if this ENTIRE series of 30 minute chapters had been put into a single book. This is a real issue with some authors who seem to love mining thier audience for every last penny in short instalments instead of simply putting it into a single price package. It's even worse now because Before Audible Plus THESE WERE FREE! There's plenty of other fish in this sea far more worth a credit.

This is the start to a uniquely constructed alien mining world - I guess all 8 books of the series can be read as one story. The writing is fluent and the world building is cleverly put together with funny, sexy and adventurous elements. The sex scenes are hot but sweet. And the narration is awesome with different accents.

I am sooo affected by this story. Was sooo not ready.. but I WANT MORE!

I loved reading this book the first time, but hearing it is even better! Nathan Lagarde is awesome!

This is a good story but it is broken down to one chapter at a book which could be costly if I didn't have Audible Escape. The story is interesting and I will continue.