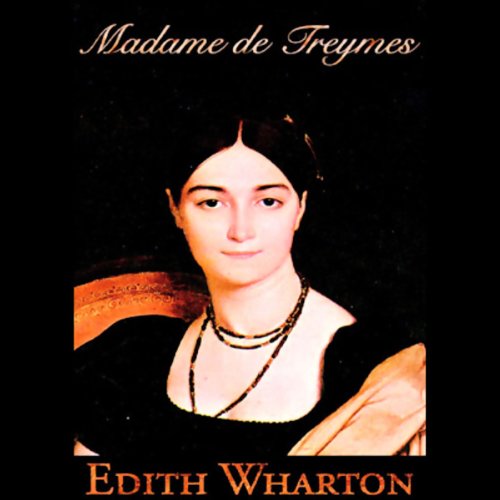 Madame de Treymes follows the fortunes of two innocents abroad: Fanny Frisbee of New York, unhappily married to the dissolute Marquis de Malrive, scion of a great house of the Faubourg St. Germain, and John Durham, her childhood friend, who arrives in Paris intent on persuading Fanny to divorce her husband and marry him instead.

A scintillating picture of American and French culture at the turn of the century and a subtle investigation of the role of women in the prevailing social hierarchy, Madame de Treymes confirmed Edith Wharton's position, as Edmund Wilson wrote, as "an historian of the American society of her time".

This edition also includes the novellas Sanctuary (1903) and Bunner Sisters (1906).

"Listeners are treated to characters they can relate to amid themes of love, loyalty, and loss." ( AudioFile)

What listeners say about Madame de Treymes and Two Novellas

a great performance and the usual intriguing

stories from Edith Wharton but the playback keeps sticking up landing you in messy random crash landings. and no titles or book marks where other novellas start?! so my issues are firmly on producers and technicals.

I Love Wharton, I Hate Wharton, Almost Dislike Her

It is a joy to listen to an Anna Fields performance. Her clear voice reveals Edith Wharton's story telling power and plumbs her hidden depths. She impresses the story on one's brain.

Sanctuary is a story of ethics told through the heroine. It begins with a choice made by a young man and ends years later with his son facing his own choice. The story deals with the profound lifelong consequences for both young men. I wish there was some way of conveying the dramatic power of this story. It seems odd that an architect's ethical choice could be of any interest but there is power, wealth, a dazzling woman and fame at stake. Decide one way and all are his. Through it all, there is a fierce winner take all battle between a brilliant young woman and the heroine over this young man. In one way, Wharton picks an uninteresting subject then makes the reader interested. It is a bit like a spy novel or something of that nature.

Madame de Treymes is a story I will not touch again. Oh yes, I understand it but have decided the story is just not worth the effort. It is too depressing by half and I put the book aside forever. Even Anna Fields can't save it. So there! Edith Wharton.

Bunner Sisters is a story of two sisters in love with the same man. He loves one of the...at a time. After that, the story gets complicated. It is a fond bitter sweet memory from my misspent youth. You will love the story and hate it. It is a Wharton story. I was going to start the "Age of Innocence" next week but have decided to put it off for another few months. Too much Wharton is hard on the nerves. I am totally undone by these three stories. I am going to spend time with P.G. Wodehouse, Austen or LM Montgomery: normal people.

Sounds like an old timey movie. It's kind of fun and a good performance but I had a hard time listening to it and paying attention. Another person might like the acting without distractions. I had too many for it to work for me. I want to close read a real book format or try a different version of the audio book.