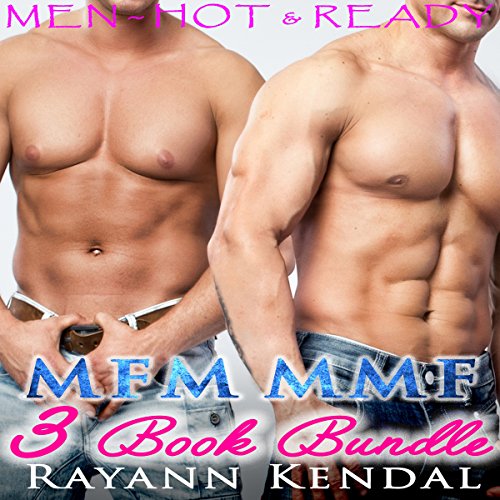 By: Rayann Kendal
Narrated by: Marie Smith
Try for £0.00

Noel is ready for something different.

A friend recommended a biker's bar which sat square in the wrong part of town. The recommendation couldn't have come with a more glowing review. Noel decides it's time to try something new. She pulls up in her neat little four door sedan and is confronted with a row of Harley's and a mouthwatering specimen. A biker to a T. Beard. Tattoos. Leather. He could probably bench press his chopper. Noel swallows her fear and heads inside only to find she's the only lady in the whole place.

Will she stick around long enough to learn what it's like to be handled by a real man?

Can she take more than one burly biker at a time?

Her best dress and reservations at the best restaurant and most luxurious hotel in town - it all has Bess believing Will is going to pop a big question. But she has no idea.

A table for three greets them as does Will's old college roommate. Lee can't keep his eyes off Bess, and Will doesn't seem to mind. Things are heating up, and Bess is thinking that it's time for her and her boyfriend to leave the smoldering bad boy behind. Her boyfriend has different plans. He has a big question to pop all right, and Will isn't leaving any time soon.

That night of strip poker with the neighbors had been the hottest of their marriage. Susan and Bill had never had the guts to ask for a follow up. Not everyone was into swapping spouses. The months ticked off the calendar until the set of neighbors and another, younger, spicier couple would be heading to the mountains out west for their much anticipated vacation.

Instead of poker, a game of Truth or Dare is struck up between the three couples. The crackling fire isn't the only thing to heat up.

Three different menage..first, which I liked the best, a biker bar, two bikers and willing girl. I prefer menage where there isn't a committed relationship..that's the first story...it was hot. The second story was about a boyfriend who brings his friend into their sex life. The girl was willing, so it wasn't a bad scenario....just that she was surprised. No deep story and relationship building so it was ok. I must admit to skimming through some of he three story was it involves a married couple, both on vacation with two other couples where she lands up with the men and he with the other women. Just is offensive to me..so didn't interest me.
Narration was excellent in all the stories..and good for a hot listen..between the three one or more will be exciting if it's you cup of tea from time to time to read about.

The last story was definitely my favorite because it delved into the characters with a setting based on vacation turned swingers evening. Of all of the stories, I would definitely listen the last one again as the storyline was more layered and developed.

Just what you would expect.