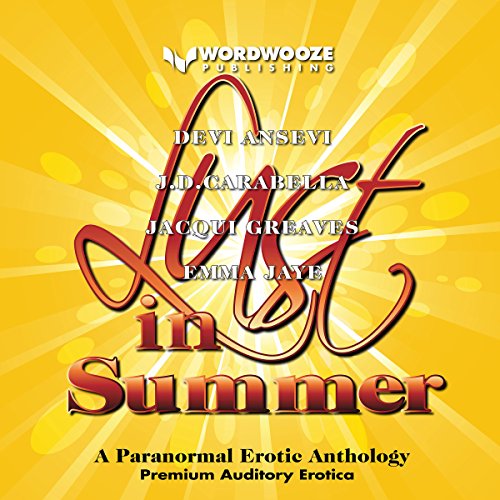 Four scorching novellas are waiting for you in Lust in Summer, volume seven of the Lust anthology. A submissive librarian, a lonely exhibitionist, a band of rebel pagans, and a gay college student will find out just how hot it can get when mortal and paranormal worlds collide.

In Devi Ansevi's Captive Mate, it's X-Men meets X-tra hot. Jane is a librarian with a taste for submission. Bender is the Dom who broke her. Minutes after arriving at the Eagle Eye headquarters, she's learned three things: (1) Shifters are real. (2) Bender is one of them. (3) He claims she's his mate. Under threat from an assassin, Jane agrees to let him keep her safe, but she’s determined to protect her heart. Is Bender Dom enough to convince his willful mate they belong together?

In Midsummer Night by J. D. Carabella, Jennifer feels like one of the faceless masses in a nameless city. A sexual fireball trapped in a life of drab invisibility. She longs to break into a world of light and color, to escape the shackles of society and become the fearless woman of her dreams. But she can't do it alone. She needs someone to share her passion and her kinks. It seems too good to be true, but she may finally have found that someone. When he invites her on a wild adventure, how can she say no?

In Jacqui Greaves' Rose Moon, it is midsummer night, Litha, and the triplet witches have traversed the veil between realms to collect their dues from humans. Rather than a roaring bonfire and a crowd of naked revelers, only a ragtag group of rebels await. The human world has changed beyond all reckoning since their last visit. Captured by the mad monk and stripped of their magic, the witches face a deadly battle to save themselves, their new acolytes, and the realms from a never-ending winter.

In Emma Jaye's Incubus Summer, Finn is a college student caught in a supernatural power struggle. Two weeks after the break-up with his boyfriend, his life has spiraled out of control. Bonded to an incubus, pursued by a werewolf, and betrayed by a fae, will Finn find the strength to choose his own destiny, or will he accept his lover's dark hold?

What listeners say about Lust in Summer

John Bender was a shapeshifter griffin. Jane’s ex-husband Seth was a Dom and she was a sub. He offered her to John for his enjoyment. Jane was shocked to find out what he was and that she may be his mate.
Jennifer was an exhibitionest and her show in front of her window brought Robin/Puck to her apartment in a flash. They both loved kinky sex in public. Puck was a fairy and he let her follow her dreams.
Midnight, Twilight and Dawn were triplet witches. On each summer solstice they went through the realm to replenish their strength by having sex with humans. Someone used magic to compromise them getting their strength back.
Finn was a college student. After his break-up with his boyfriend, he finds himself having to make a big decision. He is really screwed.