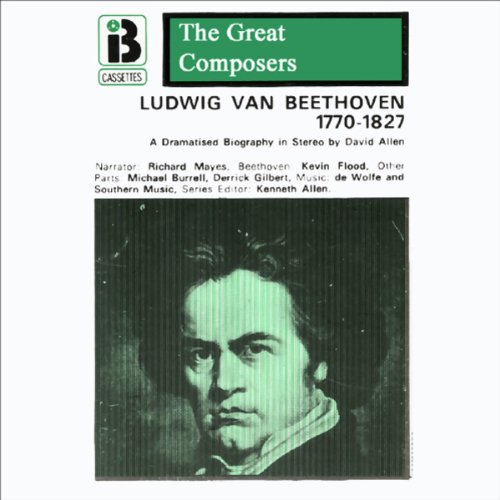 By: David Allen
Narrated by: Richard Mayes
Try for £0.00

Ludwig van Beethoven: 1770 - 1827 begins with the famous first four notes that begin his Fifth Symphony. Most people can instantly recognize them without being able to identify them. David Allen’s dramatized biography sheds light into the German composer’s life.

We see the tempestuous young composer trained by his stern grandfather and then moving to Vienna, where he befriends Hadyn. Later, Beethoven composes his great symphonies despite the loss of his hearing. Eventually, his symphonies are acclaimed by the masses and he becomes a celebrity.

Set to Beethoven’s immortal music, this biography, performed with authority by Richard Mayes, mixes critical insight with dramatized readings of his own letters to family members and feminine acquaintances.

"Imagine a blind painter!" So said Richard Wagner when describing the effect of deafness on a composer. Yet Ludwig van Beethoven was a man with the character to overcome this seemingly incapacitating disability and produce some of the most powerful and beautiful music ever written. This fascinating programme selects the words of Beethoven and his contemporaries, and includes excerpts from his best known and loved works. Together with an informative and illuminating commentary, it conveys to the listener an exciting and colourful picture of a musical giant.
©1977 David Allen (P)1977 Ivan & Inge Berg