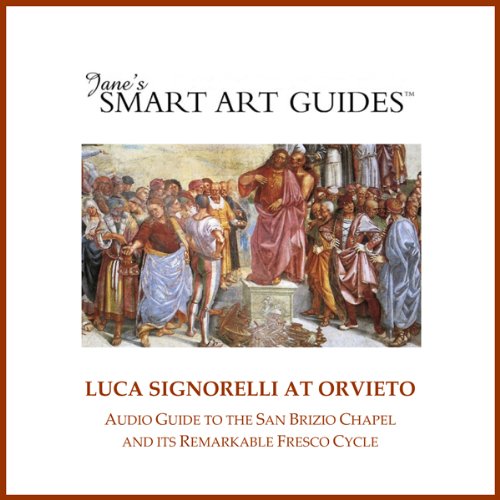 In 1447, Fra Angelico began painting his heavenly vision on the vault of the San Brizio Chapel in Orivieto, but within months he abandoned his contract. Fifty years later, Luca Signorelli was commissioned to finish the ceiling and to decorate the walls of the room. The result was one of the most original and significant fresco cycles produced in Italy during that historic period of artistic achievement known as the High Renaissance.

Now, with this audio tour, you can experience these ground-breaking frescoes guided by the scholarship of a renowned Renaissance historian. This guide is the exclusive audio adaptation of the popular book in The Great Fresco Cycles of the Renaissance series, written by a distinguished scholar of Medieval and Renaissance Italian art. The San Brizio frescoes depict the Christian story of the end of the world, and an exploration of the world beyond the grave.

Jane's engaging narration will guide you through the powerful imagery, to understand the fresco cycle in the context of the history and the artistic genius that coincided in its creation. It is widely acknowledged that Signorelli's Orvieto nudes rival the energy and power of Michelangelo's art! This audio guide reveals:

What listeners say about Luca Signorelli at Orvieto

I have used several of Jane’s Guides on a recent trip Wonderful detail not found in guidebooks .or shorter audio guides. Obviously much time and study has gone into each topic.

I enjoyed going deeper into the San Brizio Chapel. But the presenter doesn't modulate her voice to show any passion or personality. That makes it a little tedious.