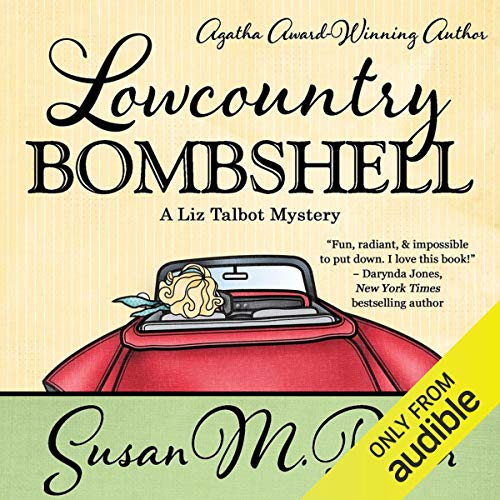 "Susan Boyer delivers big time with a witty mystery that is fun, radiant, and impossible to put down. I LOVE THIS BOOK!" – New York Times Bestselling Author, Darynda Jones).

Born precisely fifty years after the ill-fated star, Calista's life has eerily mirrored the late starlet's - and she fears the looming anniversary of Marilyn's death will also be hers. Before Liz can open a case file, Calista's life coach is executed.

Suspicious characters swarm around Calista like mosquitoes on a sultry low country evening: her certifiable mother, a fake aunt, her control-freak psychoanalyst, a private yoga instructor, her peculiar housekeeper, and an obsessed ex-husband.

Liz digs in to find a motive for murder, but she's besieged with distractions. Her ex has marriage and babies on his mind. Her too-sexy partner engages in a campaign of repeat seduction. Mamma needs help with Daddy’s devotion to bad habits. And a gang of wild hogs is running loose on Stella Maris. With the heat index approaching triple digits, Liz races to uncover a diabolical murder plot in time to save not only Calista's life, but also her own.

i have happily recommended this book to several friends It is a fast paced frothing blend of mystery, coincidence, romance, look-a-likes, and gun play. Oh, and a guardian spirit to boot.

What was one of the most memorable moments of Lowcountry Bombshell?

A tossup between the first meeting with her new client and the ill-fated ferry back to the island. One is a near perfect start to the book and the other is fate personified.

Have you listened to any of Loretta Rawlings’s other performances before? How does this one compare?

I listened to her performance in the first book of the series and loved it. Then she goes all breathy and gives us a really great Marilyn. Great pacing and near perfect characterizations.

Genteel Southern Living Will Rise Again. (or at least we all can hope so....)

Give it and the first book in the series a chance. You will not regret it.

Yes, yes, of course! Loretta Rawlings' southern sounds will lure you in, and keep you begging for more! The storyline moves quickly enough to keep you interested, and the ending is always a shocker!

What was one of the most memorable moments of Lowcountry Bombshell?

So many plot twists, hard to pick the one.

I'm hooked on this series. The 3rd book is currently downloading. Love the narrators performance.

A light fun ,sweet mystery with charm.Lots of suspense but not gorey and not violent, It was a nice mix.

I'm enjoying this author and narrator! Stories are fun and entertaining! None of the characters are annoying or boring I love the details.

As usual Susan M. Boyer has given us another great Liz Talbot Mystery. And along with it she throws in some good ole romance to boot.

This story was equally as good as other Susan Boyer books.
It was a great story line with a good surprise ending. Humorous lines, a little sex but not too explicit , and dime funny characters .

This story kept me entertained until the end, I am looking forward to listening to more of this author.

I listened in the car on a long ride. it made the time pass quickly.

great story and fun to listen to

my wife and I listen to books as we travel and this book was perfect.