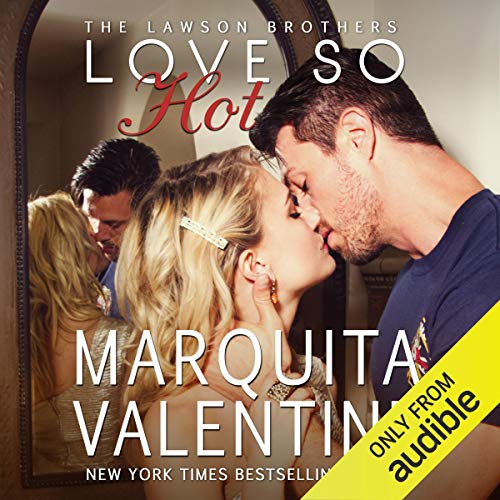 By: Marquita Valentine
Narrated by: Piper Goodeve
Try for £0.00

Love So Hot is book one of The Lawson Brothers.

Bank teller and all around good girl, Sydney McKnight, is tired of being the girl all the guys want to have as a friend. Who better to help unleash her inner vixen than her best friend and secret crush, Brody Lawson? Only, Sydney has no idea how to ask him, without their friendship going up in flames, until that is, the town of Jessamine's annual firemen's auction gives her the perfect excuse to set her plan into motion.

Fire Captain Brody Lawson has been in love with his best friend, Sydney, for years, but he would never risk their friendship by confessing his feelings to her. So, when Sydney beats out the competition to buy his time at the annual Firemen's Auction, Brody can hardly believe his luck until she asks him to teach her how to seduce a fellow fireman.

Now, it's up to Brody to show Sydney how perfect she already is and convince her that the only man for her is him, because if Sydney is going to seduce any man, it's going to be him. And once he has her in his bed, he's not letting her go.

What listeners say about Love So Hot

Friends to lovers - Sydney and Brody have been friends forever. And they are both secretly in love with each other. But no one wants to confess their feelings for each other because they don't want to ruin their friendship.

So Sydney asks Brody to help teach her the art of seduction.

You know what's going to happen here. Despite it's predictability, the story held my attention and I wanted to know how it would all play out.

If you are a fan of best friends to lovers romance and quirky small town charm then I highly recommend you to read Love So Hot by Marquita Valentine. If you haven't known by now, I adore and love this author and her writing. She has a magically way of making you fall in love with her lovable cast of characters and of course leave readers like myself with hearts fluttering for those Lawson brothers. And in Love So Hot, Ms. Valentine turned up the heat level as two best friends, Sydney McKnight and Brody Lawson slowly danced around each other as they try to fight their sexual and emotional attraction to one another. What started off as a teaching lesson on seduction soon finds Brody and Sydney falling deep for one another. So what happens when the lessons on seduction gets blurred with the matters of the heart? Can Sydney tell Brody that she has and always been in love with him?

Love So Hot was sweet, charming, and sexy!!! I love the friendship of Brody and Sydney and of course the meddling Cherry McCoy. Although Brody and Sydney needed a good slap to their heads and encouragement to finally admit the truth about their feelings, I did enjoy their playful lessons on seduction. I must say Brody definitely turned up the heat in this explosive love of passion and friendship. So if you are looking for a love story that is hot then I suggest you read Love So Hot by Marquita Valentine. Ms. Valentine will definitely have you ringin' the alarms because Brody and Sydney are fiery hot!!!

I read this series a few years ago and found this audiobook during the big sale a couple months ago. I love this narrator! The story is cute but quite tame for my preference, however it kept me interested enough that between the writing and the narration I'll likely finish the series down the road. There was a fun "teach-me" trope that turned very quickly into a "secret relationship" trope.
3/5 story, 3/5 narration
❤️🎧❤️

This story was very good. I enjoyed listening and it kept me entertained. Will definitely listen to more from this author. Narrator was good also.