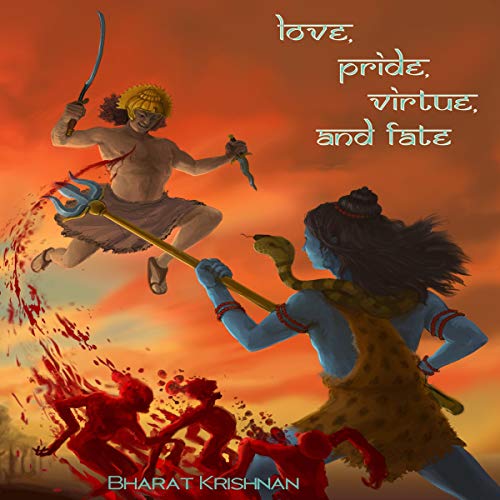 By: Bharat Krishnan
Narrated by: Joana Garcia
Try for £0.00

You might know that Greek gods interfered on both sides of the Trojan War, but did you know that Hindu gods fought alongside both the Pandavas and Kauravas in the Mahabharata? In the same way the ancient Egyptians worshiped Ra above all else, did you know that the monkey-god, Hanuman, gained his wisdom from the sun? Did you know that Krishna and Hercules are often linked to a past that includes Alexander the Great's conquests? And just as Noah had his ark, one of Lord Vishnu's avatars had a similar tale for Hinduism. All of us share the same stories because the things that unite us are far greater than the things that divide us.

I wrote this book because I wanted my loved ones to hear about Rama and Krishna and Saraswati as they also learned of Thor and Hercules, of Horus and Ra, of Noah, and Moses. In these 25 tales, you will be immersed in Hinduism in a way that highlights the traits I found most compelling in my research - tales of love, pride, virtue, and fate.

What listeners say about Love, Pride, Virtue, and Fate

This is a good introduction to any listener interested in this subject can gain a great deal of information on a religion practiced by a lot of people.

A good reference book as a complement to Mythology for your home library. However, I was expecting more or myths that authors view on them but overall a this was a good read.

Very informative and interesting to listen

Very informative and interesting to read! The book was thoroughly exemplified. I remember taking up Greek mythology in our English class during Junior years, and I think it would be more intriguing and compelling if we had this manual, because it is complete with all general information needed to help us more figure out the names and all the sort.

I really enjoyed this book!

This book is a quick read & large print but chock full of great information. It'll be useful material for studying Greek Mythology; a great beginner's guide for Greek Mythology.

My 6-year-old loves these stories

the stories are great to listen to over and over. he sits intently listening to the stories, and afterward, they lend themselves to interesting ways to incorporate life lessons.

I love this story. Actually all of the different stories. Real Greek myths with a twist of funny elements. Awesome!

Great for the Family

Many of the iconic stories told in a way that can be consumed by all ages. Each story is in bite-size chunks but with plenty of content.

I love the Greek Gods, always have a will, but this story is my favorite about the Greek Gods. And the narrator is amazing. The author also put a lot of funny bits in the story.

Readers Digest style writing of an important collection of stories, well written short pieces that appeal to all ages.

If you wanna live it like royalty and behave as such and feel free, I utterly recommend this wonderful audiobook of spirituality.

I loved it and read it at least 3 times! I am so happy to see that I am not the only one! I LOVE this! Totally recommend

I listened to it about a thousand times until I got a new book and listen to it again!!! It covered both the mythological characters we all know and some I'd never heard of. It is awesome!

I never really saw any part of Hinduism outside of that sphere of my life, unless it was because we were talking about religion in World History or Human Geography (in which case, I sat through class looking upon my religion through the lens of a fascinated spectator). Love, Pride, Virtue, and Fate aims to change that.

Worth to have it.

Written in an easy-to-understand and colloquial manner and simplified just so that those unfamiliar can grasp what’s happening while those familiar can recognize details (and remark on differences between what’s written and the story they heard growing up), Love, Pride, Virtue, and Fate is an entertaining study and primer to Hinduism.

IA personally love this book very much. This book is my recent time pass in my qurantine days.

I enjoyed this book and it taught me some new tools. I wish there were more strategies and practical examples.

Was downloaded, listened to and sounds fine. Not the most recognized song, so it was cool to see this blast from the past available on Amazon. It's what my heart yearned for (just) now.