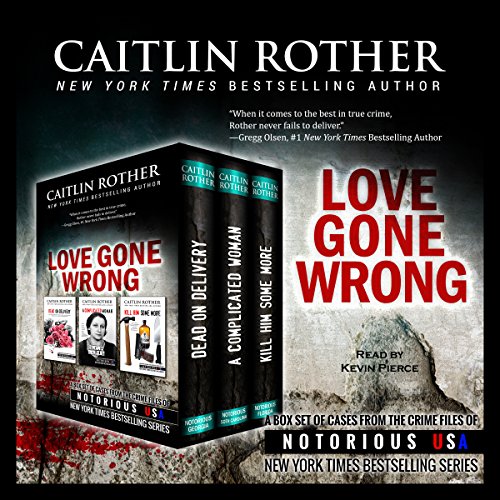 Welcome to Florida, the Sunshine State with a darker side than most. The mecca for wealthy retirees to enjoy their younger girlfriends, yachts and marble-floored mansions, where recreational drugs, sex and booze flow like the warm water that hugs the coast. Where teenage girls and their boyfriends kill their parents in the name of love, and women shoot their boyfriends then claim self-defense. New York Times best-selling crime authors Caitlin Rother and Gregg Olsen join to release this compilation of murder cases from the vacation destination that is home to Disney World and miles of beaches, yet also has more killers on its death row than any other state but California. This compilation pairs two sets of cases with similar circumstances but very different outcomes. In the first story, a former flight attendant murders her multimillionaire boyfriend of 18 years, using a gun, a knife, a hammer (and possibly poison as well), claiming he was abusive for years and put a loaded gun to her head. In the second story, a woman with a history of violent, drug-addicted boyfriends kills her latest lover after only a few weeks together, alleging that he forced a gun into her mouth in a drug-induced rage. In the third story, a 15-year-old girl falls in love and wants to have a baby with a boyfriend who is four years older. Her mother, who wants to end the relationship, ends up dead after being stabbed, choked, and injected with a syringe loaded with bleach. Finally, a 16-year-old girl and her 20-year-old boyfriend conspire to fatally bludgeon her disapproving father with a baseball bat.

Welcome to Georgia, where the all-mighty dollar trumps mercy and lawfulness on a regular basis. Where hit men can be hired for small sums and lovers can be manipulated into killing innocent people, all out of greed. In the first story, the socialite wife of a multimillionaire is fatally shot by a flower delivery man on the day of a key divorce hearing. After sending authorities on a global fugitive hunt, the man responsible is brought back to face justice 20 years later, wearing only one sandal on his gout-ridden feet. In the second, a crooked businessman trying to go straight is shot in his driveway by a hit man wearing a ski mask and camouflage gear - one in a nationwide series of contract-for-hire murders, advertised in the classified-ads of Soldier of Fortune magazine. And finally, a Gulf War veteran and father of three is kidnapped, beaten and stabbed by the lover of his on-and-off-again wife, who wants to collect life insurance benefits and pay off her house. The lover makes a deal for a life sentence and a chance at parole, while the wife gets the death penalty. She becomes the second woman ever to be executed in Georgia, even after the Pope, other faith-based advocates and two of her children fight for her clemency, citing her dramatic repentance and rehabilitation through religion.

And finally, in South Carolina, where racial strife and righteous, heavily-armed indignation leads to murder. Rother brings listeners a compilation of crime stories from this former Confederate state: the first woman in South Carolina to go to the electric chair after a vengeful feud over a dead calf turned fatal; the state's most prolific serial killer who managed to kill a fellow prisoner while on death row; and the young white man accused of trying to incite a race war by fatally shooting nine African-Americans during Bible study in a historic church.

If you enjoy reading true crime, I recommend these stories. They definately held my attention.

Would you consider the audio edition of Love Gone Wrong to be better than the print version?

Very good book. It covered several different stories, mostly from Florida. Most of them are not high profile cases, which made them even more interesting. There was Bryan Sorendino, Vicki Robinson, Steve Schulhoff and a few others. I thought it was well-written and straight to the point. Each story gave all of the details without the fluff. It is a fast and easy book to read, and it was fun! I liked it and recommend it.