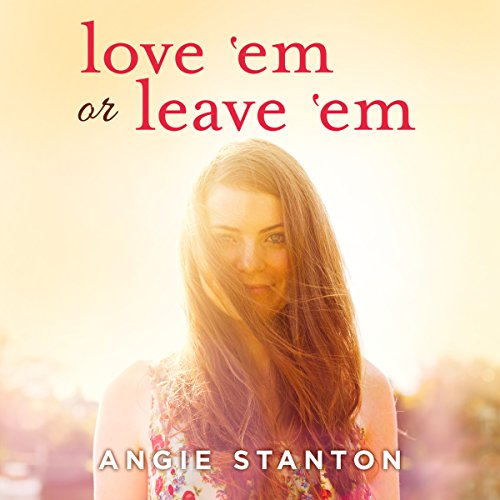 By: Angie Stanton
Narrated by: Gillian Rose
Try for £0.00

Ashley Reynolds, who hates even having her picture taken, lands herself smack in the middle of a reality television dating show. She finds herself surrounded by glamour girls and pageant queens all vying for a date with the handsome bachelor. Ashley's plan to fly under the radar and get sent home early falters when she inadvertently draws unwanted attention her way.

Bad boy quarterback Luke Townsend thought choosing between 25 stunning women would be a dream come true. How wrong he was! Luke's patience is tried by the wiles of the charmers and the persistence of the camera crews. It doesn't take long for him to realize, however, that the one girl trying the hardest to get off the show is the one who most intrigues him.

What listeners say about Love 'Em or Leave 'Em

Yes, the story is predictable but not quite the way one would have assumed. And that is what makes all the difference.

As a favour to her best friend, Ashley finds herself on a reality show vying with other women to date and marry NFL star quarterback Luke Townsend. Ashley is the girl next door that most readers can relate to. She is smart but quirky and perfectly imperfect. She also doesn't want to be on the show and tries to sabotage her own chances. Contrary to what she is aiming for, her actions only bring her to Luke's attention.

The story is funny with a few serious and emotional moments thrown in to balance the plot. The chemistry between the two characters is explosive though it does remain unclear whether they should act on their connection or not.

I enjoyed listening to the book. It has a modern feel especially because it is set on a reality show. Gillian Rose brought the characters and scenes to life making the story quick and easy to listen to.

Love 'Em or Leave 'Em by Angie Stanton is a fun listen that is very reminiscent of The Bachelor. Ashley gets roped into what she thinks is going to be a one evening commitment on a Bachelor type reality show, where Luke Townsend, the famous Green Bay QB, is the main prize. Figuring that she'll stay in the shadows and be dismissed that first night, she keeps on getting roses and moving on to the next round. Without giving anything away, I'll say that this is a cute, if not a little predictable story, where you'll get your HEA. The story is very vanilla, so no worries if steamy sex scenes aren't really your thing.

Gillian Rose did a good job with the narration. She did well with the various character voices and read with almost the perfect amount of emotion when called for. I do agree with other reviewers that the story may have been more effective if it would have been written from Ashley's POV, though this has nothing to do with the narrator. Both Ashley and Luke's voices were narrated well. I'd listen to another story narrated by her again in the future with no hesitation. I was voluntarily provided this free review copy audiobook by the author, narrator, or publisher for an honest review.

I really liked this book, which is surprising since I think watching paint dry is more entertaining than reality tv, and especially shows like the bachelor. I was a little skeptical going into this book and almost passed it up. But, something about it made me give it a chance. And, I really enjoyed it. Ashley and Luke were really good characters. The array of characters sounded about right. and, Kelly was no friend. Though Ashley could shoulder her own blame for letting her friend push her far beyond her breaking point, Kelly was so fixated on her own selfishness, she was willing to destroy her friend and expected her to do way too much self destruction all in the name of being a loyal friend. Which means she expected Ashley to be loyal while she ran a train over her. Kelly would have gotten the boot after the first time I said no and she tried to use the friendship loyalty on me. Friendship works both ways. Anyway, you could totally imagine the behind the scenes and in front of the camera nonsense. The ending got a little choppy for me, but didn't really detract from the story. Just seemed that things started moving too fast or weren't totally complete. But, it was a one sit listen. So, definitely worth the credit and time. Overall was a really entertaining listen.

I have to say I wasn't sure I was going to like Gillian Rose's narration from the sample. But, she does a stellar job. Her performance is great, her characters well performed and distinguishable. Go for it. This one is highly entertaining and not all fluff.

The story was fun and interesting but it would have been much better if it had been written in the first person. Ashley is helping out a friend by joining the show last minute. Luke is a popular quarterback and ends up having to play “bachelor” in a dating reality TV show.

Narration was well done and brought the story to life

The story moved at a good pace. Although it was a bit predictable from the beginning, I throughly enjoyed the fun storyline. The story kept my attention from beginning to the conclusion.

great romance and wonderful narration. I can't wait to check out more by this author.

I was given this free review copy audiobook at my request and have voluntarily left this review. The fact that I was gifted this book had no influence over my opinion of it.

Another new author for me to meet. Another feel good story for the year.

This story is one of those sweet, feel good stories that will leave you with a smile. It may be a touch predictable, but that doesn't take away from the characters. I mean, most romance is predictable to an extent, so that's not really a surprise.

Ashley is not a fan of cameras, but somehow finds herself smack dab in the middle of a reality tv show. Think The Bachelor, but with a different name.

Luke is a star quarterback who lost a bet so he is now the star of the new reality tv show, Love 'em or Leave 'em. He's supposed to find his true love while filming a show. Riiiiiight.

The show does not end the way you think. It's one of those unique twists that leave you asking yourself "well, WHAT NOW?" because you just know he's in love with one of these women *ahem* Ashley *ahem*.

Find out the fate of our stars, Ashley and Luke, in this cute story about an unlikely pairing and an unfortunately timed tantrum.

*I listened to the audio of this. It is the first time I've heard this narrator and I believe she did a fine job of voicing the different characters and bringing the story to life.

Loved this listen. Great story, loved the reality tv setting. Fun characters and plenty of humor. Amazing performance from the narrator, she really captured the attitudes of the characters and brought them to life. Highly recommend this if you are looking for something fun. I received a free review copy of this audiobook at my request and I have voluntarily left this review.

I have loved watching the Bachelor and was pulled into this book immediately. I found this to be a perfect example of fiction resembling real life. There are some very moving moments in this story, some laugh out loud and some moments to groan. I think this book would have been better if it was narrated in the first person. I requested this review copy audiobook and have voluntarily written this review.

When I started this book I was thinking it would be a fun piece of fluff, but it was more than that.

The story has good character development and considering the 'Bachelor' like setting there was a fair bit of relationship building between Ashley and Luke. The story got me emotionally engaged and I laughed and cried during different scenes.

Overall it was a very enjoyable listen. The narrator did a great job with the character voices and I thought she conveyed emotion really well.

"I was given this free review copy audiobook at my request, via Audiobook Boom, and have voluntarily left this review."

This story is based on a reality tv show about a bachelor and choosing a wife.The one woman who does not want to win is the one who gets the guy in the end. I like the plot twists and how the story ended. The narrator was good and moved the story along.