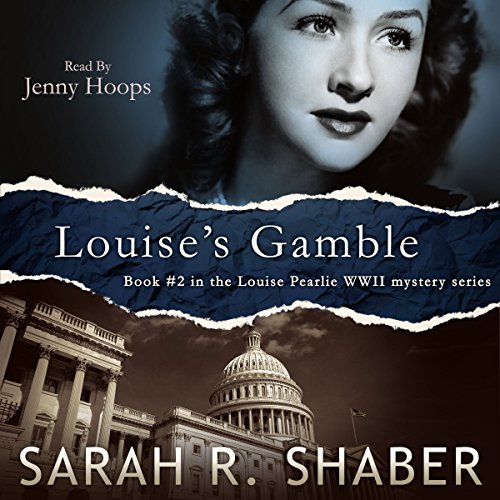 Young widow Louise Pearlie becomes embroiled in a perilous game of mafia bosses, Nazi spies and banished royalty in this wartime novel of suspense. It's 1942 in Washington DC. Louise Pearlie is now a chief file clerk at the legendary OSS, the precursor to the CIA, and enjoying being an independent, working woman despite wartime privations. But a casual friendship struck up with Alessa di Luca, a secretive war refugee, sucks Louise into a dangerous game of mafia bosses, Nazi spies, banished royalty and Sicilian aristocracy--placing not only her job, but her life, in jeopardy.

What listeners say about Louise's Gamble

I love this series!! Trying to figure out who did it and want is going to happen next! The relationship between Louise and Joe is blossoming. Louise is really finding who she is meant to be. I can't wait to hear the next one!

I LOVE this series

I love period mystery's and Sarah R. Shaber does it SO very well. She immerses you in that era with dialogue, descriptions of scenery and world events from WWll time period. I've asked my son for a vintage radio (mp3 player) as a gift and keep imagining listening and relistening to this series on it.

I don't usually read books or watch series that deal with the 40's and 50's as some of the mindsets of that time period can set my teeth on edge but in the Louise Perlie mysteries, we get a heroine who has the same reaction. But she deals with it with grace as much as possible but if necessary she can take it to the next level.

This story dealt with the Italian mafia and a knitting circle where spy secrets were being passed. The difference between "knitting" and "mafia" was gapped with great writing and a great narrator. I don't think I could imagine the Louise Perlie books being narrated by anyone but Jenny Hoops and I hope it stays that way.

I wholeheartedly recommend this series.

Poor Louise you can not but love her

This Lady is doing everything to start a new life and become a modern women and she keeps being in the wrong place at the wrong time. The one thing about her is she always trying to better herself in her work, her friends and her home life at Two Trees Boarding house. The adventures her is of spies, mafia, and a friend who dresses like a poor refuge but is really a Countess who wants to help in the war effort but giving information to the government thru someone and guess who she meets? Ever Thursday night the is a social group of women who meet to knit items for the soldiers overseas. The information she wants to give the government is about a mafia double agent working at the docks sending information to the Germans on ships and routes. But before she can she is murdered it is classifies as suicide and Louise does not believe that wants to find out who killed her and why and also were the letter she had received to give Louise was otherwise find the letter find the murderer. In finding the letter Louise gets involved with all kinds of people both good and bad, rich and poor and some who she thinks are friends and some she thinks are enemies.
As in the first book there are many story lines, plots and plenty of worry for Louise. The story is well written and the narrator is able to hold you in a grip that makes you worry about Louise as if you knew her and was with her in the books. Also the narrator brings the other character alive to the point were you hold your breath hoping Louise catches on before she gets into trouble but as usual she gets into trouble and has to be rescued and sometime argues that she was fine and did not need help because is A Government Girl who is a file clerk and she a modern women who can defend herself!

Historical mystery, great series, and good narration. Showing a side of the war, with Louise, a widow, enjoying independence, She had a casual acquaintance with a war refugee, next thing she knew she dealing with the mafia. E cellent flowing plot, and characters. Given audio for my voluntary review and my honest opinion

This is the second book in the Louise Pearlie series. It is a standalone book with no cliffhanger ending. You can easily pick up the series with this book without having read the first book in the series, Louise's War. There are several references to events which occurred in the first book but the author kindly provides a quick summary to catch you up.

I really like this series -- it's well written; Louise is a very likeable and relatable character; and the mysteries are interesting. As this book takes place during WWII, I love that the author provides prices of things such as rent, salary and clothing. I have heard many stories from members of my family who lived through WWII so it is interesting to me when the author talks about food rationing, people's attitudes at the time [for example, arresting women but not men for spreading venereal diseases] , and, in general, the lack of ability to communicate quickly with others as there is no instantaneous communication [email, texting, cell phones, etc.]. While Louise is a strong MC, the views of that time regarding women and their abilities are present. While Louise is generally accepting of these attitudes, I like that she finds ways to work around them and still achieve her goals.

The narrator, Jenny Hoops, is always great and this is no exception. She narrates at a good pace and provides different voices for the characters.

Once You Hear One, You'll Want to Hear the Rest

I have listened to each of these Louise stories that are available on Audible. The stories are fun and believable and Jenny Hoops does a great job as narrator, Her Southern accent is charming and as I am from the South, totally believable. I only wish Audible had the other episodes that are missing.

Louise works as a lead file clerk in the offices of the OSS during WW2 but is coming to know more displaced persons and their backgrounds. At least she thinks she knows about them. One of these friends turns out to be displaced aristocracy masquerading as an ordinary citizen and has a message for Louise's superior. Lots of intrigue and suspense balanced by well researched aspects of ordinary life during that war. Well done!
I laughed at the references to having to color the oleo both in the book and in a few reviews because here in Wisconsin colored oleo was illegal from 1881 to 1967!
The audio are performed by Jenny Hoops who really makes a positive difference.