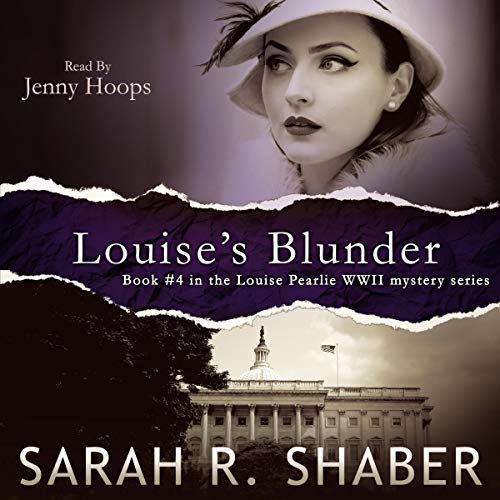 Government girl Louise is blackmailed into investigating the suspicious death of a missing co-worker, with sinister consequences.

1940s, Washington DC. Government girl Louise Pearlie is asked to review the file usage of a missing analyst from the Office of Strategic Services - the US’s wartime intelligence agency - only to learn he’d drowned in the Tidal Basin days before. OSS confirm it was an accident, and Louise is sent back to her regular job in the file rooms.

Her time spent investigating Paul Hughes at least has one positive outcome, though: Louise meets a young woman in the OSS Reading Room, who asks her to join her ‘salon’, where she is encouraged to talk about controversial issues like racial segregation and equal pay for women. Socializing with the women helps her cope with her beau Joe Prager's transfer to New York City.

But Louise’s life soon takes a dangerous and sinister turn, and she can’t help but worry if she’ll wind up floating in the Tidal Basin herself....

"As usual, the author gives Louise, a strong and capable woman, a solid and suspenseful story; and, also as usual, the WWII setting feels as real as the reader's own living room. This series keeps getting better." (Booklist)

Nice Addition to the Louise series

Louise's Blunder by Sarah R. Shaber is a nice addition to the series. I have listened to several other books by this author, and found this story to be very enjoyable. I requested this review copy audiobook and have voluntarily written this review. This story has some unexpected twists, great imagery, and even some humor. Jenny Hoops performs this book very well. She brings the characters to life with her voice. I will definitely listen to more books by this author and narrator.

I was given a free copy for an honest review and as I'd already listened to an earlier book in this series, I was very happy to get the opportunity to listen again.

My only wish is that this book was a little longer - just because I enjoy following Louise's journey through figuring out the crazy war-time world she lives in! I would have like to see a bit more development in some areas of the book, particularly the climax at the end, I would have enjoyed being kept on tenterhooks a little longer.

I love the way the chapters open with excerpts from the guide to employing women! It really is a bit shocking what pertained back then! The quotes add nicely to the other historical information in the book. It's one of the things I enjoy in this series - the historical tidbits.

From Office Life To Espionage

The novel covers daily office gossip and life in 1940's wartime Washington DC to a mysterious death, espionage and Russian spies. The writing style is very lively with lots of interesting historical snippets and great dialogue. The cast of characters are well rounded and believable with Louise, our central character, very enjoyable. A wonderful narrator adds to the listening enjoyment. A novel to be recommended, roll on the next adventure.

Additional Comments:
- The excerpts from the 1943 Guide to Hiring Women are hilarious.
- Louise is a great character. She’s intelligent but not impossibly smart. She’s savvy, but not perfect. She makes mistakes but not ones that are unfixable.
- It’s kind of like a clean, adult Nancy Drew story. The old school ones. There’s a formula but it works.
- Probably better where it is in the series, but fine as a standalone as well. Somehow, I ended up getting book 4 first, but I intend to listen to the others.
- Content warnings: It’s an excellent piece of historical fiction. The main character’s views on Blacks, women’s rights, etc are progressive, but people still walk around using the word Negro and such. If that’s gonna give you hypoxia, go read something else. There are a few curse words used appropriately.

Conclusion:
Excellent entry in what’s probably a very good series. Don’t know about the others, this is my first time trying them. Glad I did.

*I grabbed a code off a site that lists them for authors/narrators. I freely chose to leave a review.

Louise was blackmailed into helping prove what really happened to the analyst that was dead. Meaning new friends were not interested in her, they had a secret agenda of finding what she did for the government.. She has her work cut out for her to straighten out the blunders she had made. Given audio for my voluntary review and my honest opinion

I have listened to each of these Louise stories that are available on Audible. The stories are fun and believable and Jenny Hoops does a great job as narrator, Her Southern accent is charming and as I am from the South, totally believable. I only wish Audible had the other episodes that are missing.

This is the 4th book in the Louise Pearlie Mysteries, but it stands alone. I very much enjoyed the story which combines WWII and cozy mysteries which are my favorite genres. Louise works for the US government in the Office of Strategic Services doing secretarial/clerical assignments. She is overqualified but kept in her position due to under staffing. The story is exciting and fun. Each book in the series is great! I was gifted a copy of the audiobook in exchange for an honest review.

Louise's Blunder, an enjoyable journey back to yester year was well worth the time in listening to. Five stars.

Shaber hits another one out of the park

I can't remember the last time I've enjoyed a mystery series so much. I read another reviewer who found some things the protagonist did as a bit unbelievable. I didn't. I wasn't born during the time setting for this book but I spent a lot of time with women who lived and worked in that time period. A woman needed to juggle difficult situations with grace and diplomacy if she wanted to keep her job. A single mistake could end her job and her independence. So Louise Pearlie getting caught in the situation she was in made perfect sense to me. Louise Pearlie having a job with the OSS was a fantastic opportunity for her and I could easily see her doing what she could do to fix her 'blunder'. Very realistically written. By the way, those cringe-worthy excerpts at the beginning of the chapters are actual quotes from the 1943 Guide to Hiring Women.

I think when we read past history, we all hope that we would stand up and do the right thing when it came to defending human rights. Shaber creates a protagonist that we can relate to. Shaber's writing shows us (rather than 'tells us') what it feels like to find yourself in a position where you can choose to stand with others or do nothing and let injustice prevail. I found myself tearing up at some parts (especially at the sweet afterword dedicated to Shaber's relative).

I love the narration by Jenny Hoops. I especially adore the accent she uses for Ada, Louise's flatmate. Louise's pronunciation of some of the terminology sounded EXACTLY like my grandmother when she'd struggle over foreign words. It feels SO authentic for that time period.

I highly recommend this series.

I love this series. It has history and mystery. I miss the love story in this one and hope Joe comes back in the next one! The narrator's voice is PERFECT for these books

For those who like historical fiction, spy novels and historic fiction thrillers they will really enjoy this one. The narration was well done. I only gave it 4 stars due to my irritation with the number of he said and she saids in the dialog. Give this book a bit of an edit in the dialog areas and then you will have a fantastic story. Still highly recommend this to those who like this genre, it was a lot of fun and I will be looking for more like it.

The OSS was the precursor of the CIA and it operated during WW2 (check out the biography of Julia Child!). This agency was every bit as disjointed and dysfunctional as the current one and many of the employees, both stateside and overseas were inadequately prepared for the tasks that they were assigned. Enter Louise Pearlie, government worker, widow, a woman of her time but more willing than some to get out of her comfort zone. The publisher's blurb is a good start, but I really liked the whole thing even though I hadn't read any others in the series. It's a nice length, too.
I recognized the narrator from other work she's done, and I really enjoy the narrations by Jenny Hoops!
I won this audio book in a giveaway.

I received this book for free. I am voluntarily leaving this review and all opinions expressed herein are my own.

This is the fourth book in the Louise Pearlie series. I have not read any of the prior books in the series and had no problem following the story or understanding the MC motivations. It is stand alone story [no cliffhanger ending].

Here, Louise, who has top secret clearance, works for OSS during WWII. A OSS employee has not reported to work for several days and Louise is dispatched to his residence to see what has happened to him. Louise finds he is not at home, does a quick search of his apartment and speaks to his landlady who received a telegram that the employee is with his mother. One problem, the employee's parents are deceased. Then, the employee's body is found and his death is ruled accidental but that does not jibe with the manner the body is found. Louise becomes involved in the investigation of the employee's death.

It is clear that the author has done a lot of research in this time period and there are several side stories about events occurring at the time, which were interesting. Additionally, I liked the character of Louise, who seemed to be smart, spoke her mind and stood up for others. On occasion, she did do some things which weren't very bright but that would make her human. I am interested in continuing with this series and reading the prior books in this series.

The narrator, Jenny Hoops, did a very good job. She did different voices for all the characters, so you can easily discern who is speaking, and set a good pace for the story.