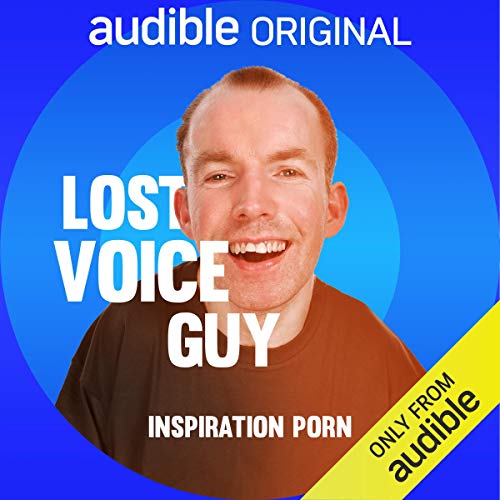 His sarcasm is awesome. But it can get a bit boring to listen to it all in one go. I enjoyed it in chunks of 15min.

Having never watched a Lost Voice Guy gig before, or watched Britains Got Talent. I wondered... how can a guy without a voice completely control an audience and win massive competitions?

Listen and learn. Ridley delivers a performance truly masterful! I was crying with laughter from start to finish!

Really loved him on BGT as he stood out from the rest but here. Gutter talk.

I was struggling to finish it. It is just not my kind of humour. x

lost the crowd...forgot its meant to be a comedy!

he lost the crowd...forgot its meant to be a comedy! the first half is OK but the second half seems to be more about how he pushed his girlfriend away and feels bad about it...made it hard to listen too.

I didn't know what to expect as I hadn't heard of Lost Voice Guy before and legit this was brilliant. Lee was really funny and brutally honest, as well as being highly entertaining, he really helped me understand the challenges disabled people face in day to day life in ways I wouldn't have ever thought of. Thank you for teaching me.

I love that Lee Ridley states it as is for our disabled community. He is funny, talented and makes me laugh even when the audience went a little quiet. Is that because I'm disabled as is all my family and we have a dark sense of humour too.

I love that he touches on issues that others would not because it can be surreal how stupid some people are when it comes to attitude. This just shows that being disabled is actually made harder by society and government but it's obvious that ignorance and stigma is out there. We have so many stories that would raise eyebrows but we laugh it off sometimes.

The voice is monotone but what he might come out with is definitely what keeps you listening as he has you belly laughing. He says he's not an inspiration but I disagree as it takes a lot of courage to get up, do comedy and be good at it. It's not because he is disabled, that's just a condition and not a definition of who he is.

All my families and friends who are disabled all have dark humour, quick wit and laugh a lot. It keeps us going and we need more Lee Ridley's in comedy!

Listened to his set, got bored with the interview with Ross Noble.

Doesn't work !!! Can't even delete as it says it's not on my account, yet I've tried to download it again and audible won't let me because it is already on my account....catch 22 me thinks .

Very funny and brilliant as usual. Entertaining chat at the end with Ross Noble.