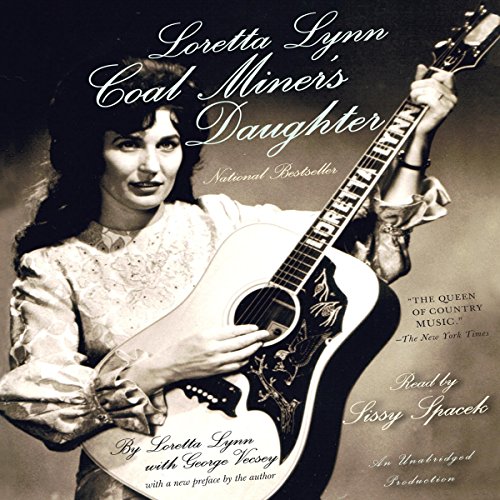 Loretta Lynns classic memoir tells the story of her early life in Butcher Holler, Kentucky, and her amazing rise to the top of the music industry.

Born into deep poverty, married at thirteen, mother of six, and a grandmother by the time she was twenty-nine, Loretta Lynn went on to become one of the most prolific and influential songwriters and singers in modern country music. Here we see the determination and talent that led to her trailblazing career and made her the first woman to be named Entertainer of the Year by the Country Music Association and the first woman to receive a gold record in country music.

Such an uplifting, inspiring book based on the life and career of the great Loretta lynn. Sissy spacek makes the book even more interesting due to her sounding very familiar to Loretta. Worth the listen or even a read great book!!!

honesty and warmth throughout.

simple to listen to the story of the world's greatest country star. There is no story like Loretta's.

Sissy Specek makes this an eas boik to listen to and follow the story. Hope you enjoy it.

I was surprised how funny and down to earth artist. sit back and have a belly laugh

I thoroughly enjoyed every word. I love Loretta Lynn and Sissy Spacek. This gives great background to the movie.

the book was amazing

it's like being spoken to by loretta...just warm and honest..generously sharing her life with us.

Sissy Spacek did a fantastic job narrating this fun and enjoyable book. Lynn appears to be candid about her life, both good and bad, and provides a bit of insight into the world of country singing. This is a fun read.

Wish I'd known this book was over 30 years ago. I was truly not surprised by anything, except the fact that her husband clubbed a dog to death for barking. Just lost any respect for a man who is questionable in his treatment of his wife, people, and now animals. Uggghhh, disgusted.