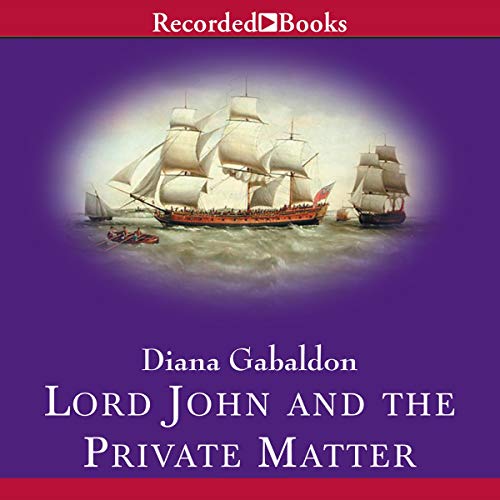 By: Diana Gabaldon
Narrated by: Jeff Woodman
Try for £0.00

The epic, multivolume Outlander saga is the starting point for a brilliant new series that begins with the novel Lord John and the Private Matter. Filled with intrigue and mystery and starring one of the most popular Outlander characters, Lord John Grey, this fresh new tale is utterly captivating.

In a richly drawn 18th-century London, Scottish exile Lord John faces a difficult situation. His cousin Olivia is engaged to marry the Honorable Joseph Trevelyan, but he has just observed something of a rather personal nature that, if confirmed, might put an end to any talk of marital bliss. Determined to investigate further, Lord John is distracted when the Crown calls for his services. A comrade in arms has been slain, and to complicate matters, the victim may have been a traitor. Now Lord John has not one but two puzzling mysteries to solve.

What listeners say about Lord John and the Private Matter: International Edition

Really enjoyed the story but the narrator had a strange way of pronouncing some words!

I will not be listening to any more in this series, in fact I didn't finish this one. Why have an American reading this book who has no idea about how to pronounce English?? Seems very odd not to have chosen someone who speaks English. Or just do it all in American, but to be jumping between English of about 30 years which is offputting anyway, and American for no reason, within the same sentence, is unbelievably offputting.

Would you be willing to try another book from Diana Gabaldon? Why or why not?

Not if it's this reader

Would you be willing to try another one of Jeff Woodman’s performances?

Never ever unless it is an American book

Dull, Gabaldon trading on her name.

Thoroughly enjoyed Outlander books, apart from the last few. This should have indicated that perhaps author had run through her ideas.
This book is slow, dull & spends an inordinate length of time having anxiety attacks re the state of Lord J's attire!

Lord John and the Private !atter

The narration complement's a captivating story line . I'm off to discover more
In the series.

A bit of a surprise

The subject matter of the story was a bit of a surprise and I bought this simply because I like the outlander novels so much. This is no outlander novel though which is, to be fair, made quite clear. It sits quite separately from the outlander sequence although I understand that other novels in the series mention outlander characters or feature them in some small way. I'd say - if you are looking for other outlander stories then this sequence doesn't fit the bill but this first story in The Lord John Grey series was very enjoyable, well read and seemed over so quickly which, for me, is always a sign that I have enjoyed it. I just bought the next in the series as a result of listening to this one and am looking forward to listening to it at bedtime.

My favourite Outlander character, Lord John is propelled into solving a mystery after spying something nasty in the communal chamber pot corner in the Beefsteak Club. Gabaldon at her best, drawing us into the sights, sounds and smells of whore houses, molly walks and on a clipper bound for 'Inja'. Lord John gives us a glimpse via flashbacks into his first shocking introduction to war at Culloden and of course hankers after Jamie Fraser. It was nice to get an idea of Benedicta who relives a part of her young life while handling a well worn copy of Fanny Hill! Watch out for the details of a bizarre and shocking way designed to burn out the syphalis. Shame Hal doesn't feature in this one but a great story well narrated.

As a long time lover of Diana Gabaldons Outlander books I love reading/hearing more of the life of one of my favourite secondary characters Lord John. Great story and very good narrator. If the voices are not right for the characters gender/different stations etc I cannot continue listening to an audiobook. Will definitely buy the rest of the Lord John audiobooks if Jeff Woodman or someone just as accomplished is narrating.
Recommended.

Does not come anywhere near the Outlander saga quality

Whilst the narration was perfectly fine and the story ambled along, there was a depth of content and character that I’ve come to expect from the author missing. Even when considered against the main characters appearances in the Outlander saga, it could have been anyone in the main character in this book. Listenable but for me forgettable

I should say at once that Lord John Grey is my favorite character from the Outlander books. Here he gets an entire novel to himself. I enjoyed the book when I first read it, and liked it even better with Jeff Woodman's nicely nuanced reading. Granted, it may be a frustrating experience for Clare-and-Jamie fans, as they are barely mentioned here. Likewise, it might be a bit confusing for those who come to this book without having read the Outlander books at all, as they'll be wondering why Lord John keeps thinking about this Jamie character. But I've always liked John Grey best, so this is the perfect book for me - and I thoroughly enjoyed the period detail of some of the seamier parts of London.

If you're missing Outlander.....

If you're considering this book because you love Outlander you'll be disappointed. I originally dove in with the mindset of Jamie, Jamie where is JAMIE!!!! He is a mere whisper a passing breeze in the Lord John series. If you're considering it because you love Diana Gabaldon's style and rich writing you'll like it. I for one loved the Lord John character and had no problem with this story. I would caution those who find it distasteful that Lord John Grey is a homosexual, and there is romance and sex in the series. I loved it once I got over wanting it to be more Outlander!

My Least Favorite in the Lord John Series

I tried to actually read this book when it was first published, but sadly, was unable to finish it due to boredom. I just didn't care about Lord John at the time. I only began to read this series for something to do while waiting for the next book in the "Outlander" series to be released. That said, I guess I care a little more about Lord John now, since he's became more of a major figure in the Outlander series. The audiobook version of "Private Matter" is better than the actual hard copy. Lord John can be funny, but is also rather snarky at times. He is a good amateur sleuth and Diana Gabaldon is a good mystery writer; however, I'm not all that much of a fan of the mystery genre, being more of an admirer of straight-forward historical fiction. If you want to fill out your knowledge of Jamie Fraser's character while he and Claire were separated for twenty years after Culloden, I recommend reading the Lord John series, especially "The Brotherhood of the Blade".
(NOTE: There is a review of "Lord John and the Hand of Devils" on Audible.com by one "D. McCoy" that I found quite helpful. This reviewer lists the proper order in which to read the Lord John novels/short stories since order is particularly important with this series. If you listen/read them out of order, you may find that you have more questions than answers. Also, I do recommend the Outlander series to readers of the Lord John series. It is MUCH longer, has many more interesting characters, and readers will discover Jamie Fraser, the love of Lord John's life and, IMHO, one of modern fiction's most compelling and enigmatic characters. Though he is straight and VERY married, he and Lord John do become quite bosom friends once they reach an "understanding". This says something to me about the likeability of Lord John and his overall sense of honor.)

I didn't dislike it, but I have to say it was pretty boring. John Gray's character was more multidimensional in the Outlander series, which is interesting, because there he was a more minor character. I was really disappointed that The Fiery Cross isn't available on Audible in its unabridged format. With that in mind, this was a decent enough Gabaldon fix.

I like Lord Grey when reading the Outlander series and this book only increased my liking. This genre is different from Outlander as it in NOT a romance novel. However, it sparkles with interesting information about 18th century sexual behavior that surprised me.

Only because it is Gabaldon

After Jamie and Claire, I was sooo hungry for more I decided to listen to this. Nothing much of either one of them in this book. It gives a glimpse of what Lord John is about but ultimately if you want to listen it for the same reasons I did - don't!
Overall, I'd actually give it a 3 but since it is Gabaldon...

Mystery with a twist!

Diana Gabaldon does not disappoint. This is a mystery involving one of my favorite characters from the Outlander series. The narrator really gives Lord John his voice. The story is intriguing and lets you see the other side Lord John's character. I can't wait to hear the other books. I will recommend it to my friends.

I really enjoyed the Outlander series and Lord John was just so charming so I was looking forward to hearing his own stories. He is just as entertaining here. Most people who didn't recommend this book didn't like it because of the homosexual sex in the book, but it was very tasteful and there was not alot. I don't think it was any reason to not like the book. It's a very intriguing mystery.

I love Diana Gabaldon's books. Read them all and can not wait to listen to the unabridged versions. Though not with the usual characters this book is a great story, well read. Combines history with detection, ... I find myself driving around the block, or running an extra mile to listen to this kind of stories.

400 miles went by without a notice. I really enjoyed the fleshing out of this character. I was somewhat relieved that John was not overly obsessesed with jamie, but had memories that were poignant.