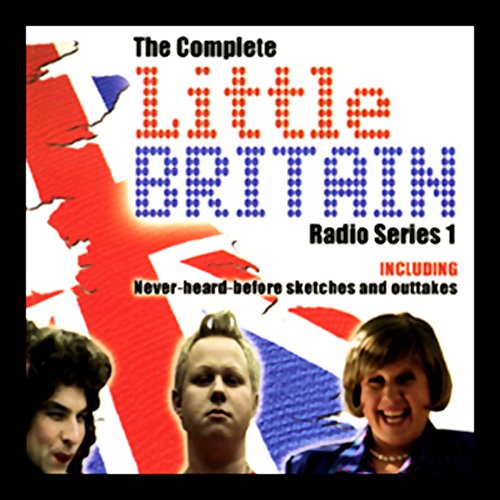 The complete first series from BBC Radio 4, plus the pilot episode and over twenty-five minutes of never-heard-before sketches featuring characters such as Ray Craven, the spoilt baby, and Liam Buckley, the car mechanic, not to mention some hilarious out-takes.

The Little Britain radio series won a Sony Award when it first appeared on radio, and has since gone on to become a comedy phenomenon. Now, available for the first time, are the original pilot and all four episodes of the original radio series - complete and uncut.

Complementing Tom Baker¿s brilliantly bizarre narration, and David Arnold¿s original music, are many characters that have only ever appeared on radio: Cockney Film Star, taxi driver Jackie Paper, Joey the Stool, and two of the worst ghosts you¿ll ever know. With a wealth of bonus material that includes sketches and hilarious outtakes never transmitted on radio, welcome to the wonderful and surreal world of Little Britain.

A radio show before it's main debut on television. A great treat for the fans of the TV show.

Little Britain is the funniest thing ever to be on the radio, and it isn't the least bit like "Benny Hill". If you loved the television version of this show, you'll also love the radio version. Some of the radio sketches have been redone for television, but there's still a lot of good stuff that didn't make it to TV. If you like British comedy you'll love Little Britain. Buy this recording!

You will like this is you like Benny Hill. I never really did. The only thing I laughed/marveled at was the format and the clever openings. I did not think most of the scripts were funny except maybe the "Only Gay in the Village."