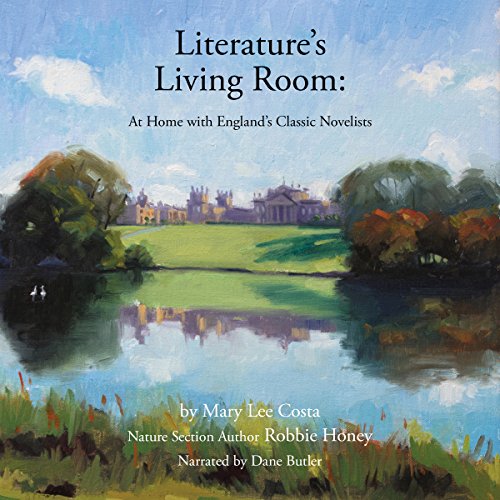 Literature's Living Room is the return invitation into the homes, architectural and natural, of classic authors whose writings we, as listeners, invite into our own homes. In this first book of the series, we explore houses (now open for public view) and natural environments of many novelists who resided throughout England: Jane Austen, the Brontë Sisters, Lewis Carroll, Agatha Christie, Winston Churchill, Charles Dickens, Elizabeth Gaskell, Thomas Hardy, C. S. Lewis, A. A. Milne, William Morris, Beatrix Potter, and Virginia Woolf, among many others.

The book has an extensive glossary that deals with, authors, authors' families, other artistic figures, and royalty. Since environments inspired many writers, from Emily Bronte in Wuthering Heights and Beatrix Potter in The Tale of Peter Rabbit to J. R. R. Tolkien in The Hobbit and The Lord of the Rings, the book features a nature section by horticulturist Robbie Honey, raised in Zimbabwe and now working globally as a lecturer, a floral creative in the fashion industry (client brands Hermès, Dior, Armani, and Vivienne Westwood), and a writer for such publications as The Wall Street Journal.

The series has been created by lead author Mary Lee Costa, a graduate of Oxford University. Influenced in her formative years by such outlets as PBS, Mary Lee, who struggled with learning to read, came to value alternative approaches to education, such as coming to understand aspects of literature and history by touring house museums: the houses where great characters were created, from Oliver Twist to Alice in Wonderland, from Winnie-the-Pooh to Sydney Carton, from Mr. Darcy to Mrs. Dalloway, and from Jane Eyre to Miss Jane Marple.