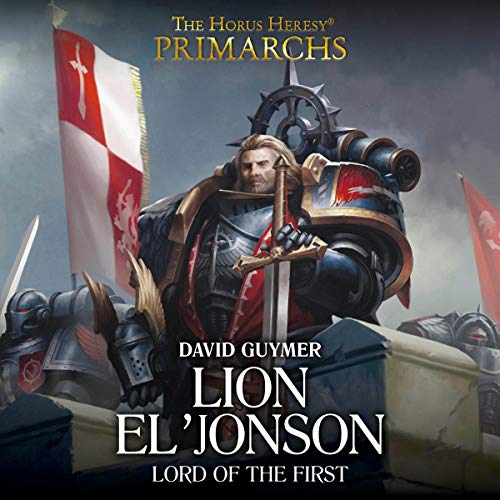 Lion El'Jonson: Lord of the First

Lion El'Jonson: Lord of the First

Book 13 of the Primarchs series.

Listen to It Because

The Dark Angels have their secrets...and their primarch is no exception. Discover what the Lion was up to while the Great Crusade came to an end.

Each primarch is an exemplary being, derived from the Emperor’s own genetic stock to embody a facet of His personality. Their powers are unfathomable, but only one of them is the First. Lion El’Jonson is the paragon of what it is to be a primarch. His Legion, pre-eminent for most of their long history, typify the virtues of temperance, pride and martial excellency that the Lion embodies. They are the Emperor’s last line and final sanction. They are His Dark Angels.

Now, while the Emperor gathers His mightiest sons for an assault on Ullanor Prime, the Lord of the First instead draws his Legion to the farthest reaches of the known galaxy, seeking to subdue a single rebellious world. Is this but another example of the Lion’s infamous pride, or is there more afoot amidst that graveyard of empires that is the Ghoul Stars, more than the Lion will share even with his own sons?

What listeners say about Lion El'Jonson: Lord of the First

cracking look at the motive of the first... excellent book .. well worth the wait

interesting dive into the lion and the first

Great read, very interesting to see the interplay between the lion and the Emperor. definitely recommend

Glory to the first

It is a great listen the Dark Angels are surrounded by mystery and this books goes a long way to expose some of their characters and orders. hints of the rangadan genocide are plenty and unlike other primarch books it gives the lion some much needed understanding

A whole lot of "meh"! The lion deserves so much more. This Just felt unnecessary.

This book goes along way to explaining the purpose meaning and origin of the DA. Short but insightful conversations between. Big E and the Lion are great. I enjoyed it and I hope to see more of the Lion in the future.

Everything I wanted it to be.

I thoroughly enjoyed this from start to finish. Great narration as usual from Mr. Keeble and fantastic story telling from Mr. Guymer. If you've wanted a deeper look into The First Legion you're going to love this. I immediately added it to my queue of books to repeat while impatiently waiting for more audio from Black Library. I demand more First Legion stories by Mr. Guymer.

I really loved this book.

Obviously some bias as I am a HUGE fan of Dark Angels. I am even a Dark Angels player owning models for the tabletop. I really enjoyed this book. Really gave a lot of deep details of how the Dark Angels function internally. Also got to get a good peek into the mind of Lion El'Jonson (Literally). Also gave a fantastic glimpse into just how dangerous many of the earlier Xeno's races were before the ones we know in the 41st Millennium. Loyalty and Honor!

one of the worst things is dealing with bad writing for the dark angels. this book paints a good picture of who the lion is who the dark angels are and the purpose they serve