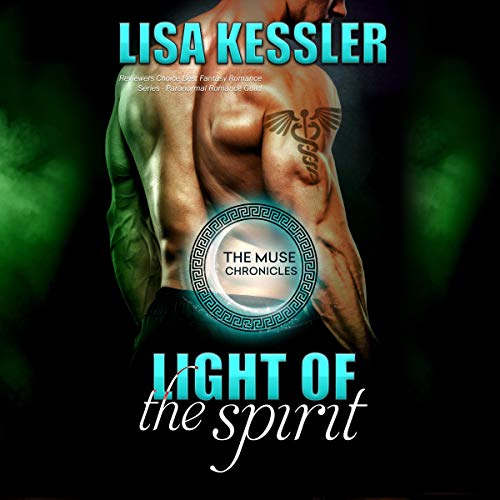 Light of the Spirit

By: Lisa Kessler
Narrated by: Gwendolyn Druyor
Try for £0.00

As the mortal vessel for the Muse of Comedy, Lia Youlos lights up every room with laughter and smiles. But there are darker forces at work, and they want to snuff out her light forever.

Cooper Hanover is a hardworking paramedic who healed Lia after a fire, but something happened that day, something medical science couldn't explain. And if he doesn't figure out how it works soon, the next healing could kill him.

Lia's smile and sharp wit tempt him to love again, and he's not going to let anyone, not even the gods, take her from him.

The Prophecy - "Every generation the nine daughters of Zeus are reborn, and with their rebirth are also nine Guardians. They will be marked by the gods, and given gifts to protect his treasure. Their abilities will only be unlocked when they find their muse."

What listeners say about Light of the Spirit

Lia is such a happy perky person, always laughing and brining joy to all. Cooper is the exact opposite because he feels he should not feel joy. They find out the he is her guardian and the mayhem ensues. This is action packed and keeps you going from start to finish. I have read all of the Muse books and enjoyed all of them. The narrator did an awesome job with the story, I like how she did not edit out the parts where she caught herself in a laugh and just kept going on with the story. I laughed and cried equally.

Each other gets better and better!

I am really enjoying this series!!! I'm not sure if book 5 is out on audible yet, but I truly hope so!!!! There's a lot of new characters introduced in this one, and while I think I know where Lisa's going with them, I'm dying to see if I'm right!

Narrator does a good job. She gives a quality performance, and she's easy to understand. Good listen.

Love this series! It's lots of fun, and I totally love the premise! If you are a new reader to this series, I advise you to start with the first book in the series because although each book is a different couple, there is a larger storyline throughout the whole series. In this book, Lia is the mortal vessel for the Muse of Comedy, and her and her muse "sisters" are in danger from a group that wants to release Kronos into the world today, and that group believes the muses will get in the way of that, so they want them dead. Each muse is suppose to have a guardian, and Lia thinks she may have found hers in Cooper, but she's unsure how to broach the subject with him, and Cooper has some walls up that make Lia wary. Love the suspense in this series, and enjoy the romance! The romance is sweet and hot, and I enjoy reading about each muse finding their guardian. The bigger storyline is also really interesting, and I'm really excited to see where Lisa Kessler is going to take the story. Love the muse premise, and love the Greek mythology throughout the story. Wonderful addition to this terrific series!