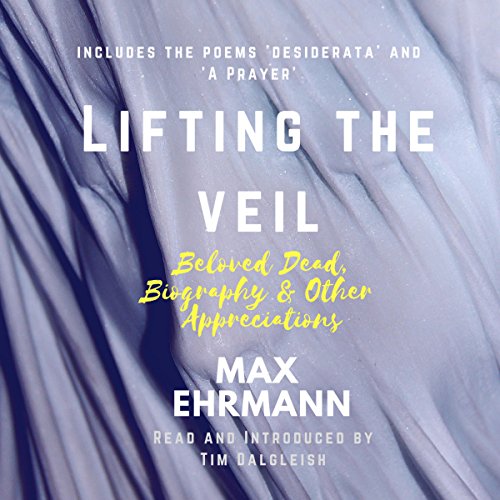 In the 1920s and 1930s, Max Ehrmann was greatly praised and much loved as the author of Desiderata, which still finds a place in many homes and offices around the world (and is included in this recording). Ehrmann was the poet-philosopher of his era. Along with the likes of Theodore Dreiser, author of An American Tragedy, Ehrmann captured the dark realities of life whilst never forgetting the rays of light within the universe.

With the poet's passion and the scientist's precision, Ehrmann in Lifting the Veil endeavored to go beyond the philosophers of the ages. In accessible language, he tugs at the veil of reality and the question of meaning in a seemingly meaningless world.

Nobel laureate Sinclair Lewis wrote that "Max Ehrmann has been about the world, looking with a clear eye, and tells about it with a sharp pen", and that his books are "honest and straight-forward and are written by a man who has a grasp of literature and a power of expression".

Introduced and read by actor Tim Dalgleish, the title essay and companion pieces provide a biographical and intellectual background to the ideas behind Ehrmann's powerful poetic thinking.

What listeners say about Lifting the Veil