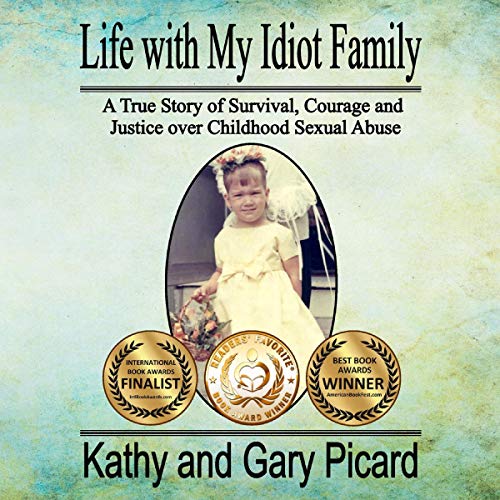 Life with My Idiot Family: A True Story of Survival, Courage and Justice over Childhood Sexual Abuse

Seven-year-old little girls love their daddies. Kathy was no exception, so when her daddy started paying “special” attention to her, she felt “special” in turn. Her daddy loved her. What could be better than that?

Few betrayals run as deep as the betrayal of being sexually abused throughout your childhood by the man you should have been able to trust with your life. For Kathy, the betrayal ran deeper because when she finally found the courage to start speaking out about what her abuser did to her, her family responded by labeling her a liar and a troublemaker.

Kathy didn’t stop speaking out, though. In fact, she spoke out more, eventually becoming a powerful voice in the nine-year campaign to get both the criminal and civil statute of limitations extended for child sex abuse crimes in Massachusetts. On June 26, 2014, the day the civil bill was signed into law, Kathy was finally able to file suit against her abuser.

Abusers get away with their crimes because the thought of confronting them - even through legitimate legal channels - can be a terrifying prospect for a victim. Yes, Kathy’s story as a victim is filled with years of sexual abuse and threats, but there are many more years filled with personal and professional triumphs as her life progressed beyond the physical and emotional reach of her abuser. Kathy is inspirational proof that good people can win and that speaking out and fighting for what you truly believe in can help make this world a better place to live.

What listeners say about Life with My Idiot Family: A True Story of Survival, Courage and Justice over Childhood Sexual Abuse

Kathy is truly a very brave woman. To tell this story and own her truth, to never give up the fight, so another child does not have to lose their innocence is truly remarkable.

I loved this audiobook

Just finished this book & I will listen again. This book has helped me feel better today about myself. Thank you Kathy❤️
This is one author I would love to meet someday.

I read Kathy’s book and now I have just finished the audiobook. This book change my life and all I want to do is help children be safe… Kathy is so motivating, it is infectious! Listening to the audiobook with Kathy’s s voice was so effective and compassionate. It was like she was sitting next to me and telling me her story. I was compelled by every word. She is my personal hero and I am so so so impressed! Thank you Kathy and Gary are making society safer for all of us! 😘💕.

I was so sad listening to this book, but then I found myself listening to Kathy's story a second time to get the full understanding of the trauma she endured (I often listen passively while I'm working). I was initially shocked at the sadness of the story and didn't realize until further researching that the narrator of the book was also the same person this story was about. Although I found the story to be incredibly sad, I also realized that Kathy came out on top - with such a positive outlook on what had happened to her.

Thank you for sharing your story Kathy.

Kathy is a true Hero

Kathy has made it her life mission to help others who have endured this horrible abuse. Her own personal story gives others the courage to face their own abusers and gives them the strength to find their own voices. She is a true hero in my eyes.
To the reviewer that picks on the way she says "Idea", she is from Massachusetts, it is how we speak. Focus on the story, not her accent.

A tru story but flat in writing.

It was interesting because it was a true story. I couldn't get over the authors use of idear instead of idea.

This is MUST read

Thank you Kathy. I recommend this book to all parents, caregivers and teachers. It gives a better understanding of childhood sexual abuse.

Thank you for your strength and perseverance, Kathy. I experienced sexual abuse as a child. It’s very helpful to share your experience to help others. I’ve been sharing for years and have dealt with the isolation and ridiculous. Gaslighting is the worst. I give you all the credit for working on having the statute changed. It is a huge step in putting predators behind bars.

Kathy is not only a survivor, but an advocate. This book is a great tool. Child Sexual Abuse is real and it needs to be addressed. No more sweeping it under the rug.

Unfortunately the narrator struggles to pronounce many words and ignores punctuation at times, because of this many sentences loose their impact.
The story itself though? Incredibly inspiring I’m so proud someone just like me was able to achieve so much.