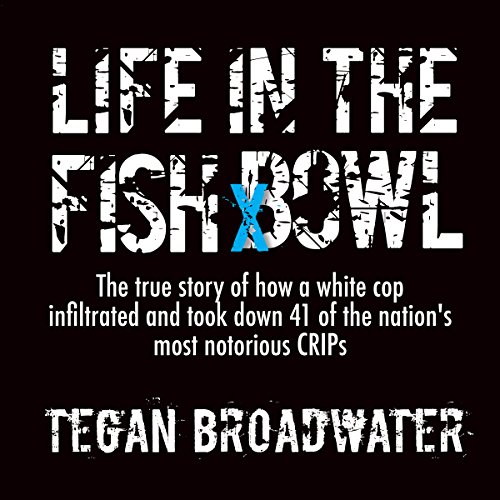 Tegan Broadwater was the consummate outside insider. Pretending to be a high-end cocaine dealer, he infiltrated the deadly Crip street gang, won their trust, and embarked on a mission to put them away. Ultimately it became a dangerous cat-and-mouse game between two men: Tegan, the undercover, and M.D., the cagey drug lord with a street-level MBA. Only one of them would be left standing.

Life in the Fish Bowl is Broadwater's first-person journey from green patrol cop to gangster's friend to Crip buster, loaded with action and inside information. It's also a fascinating eyewitness account of clotted police bureaucracy, hierarchical thug life, and the hazy netherworld of a man who had to move through both of them. This is an intimate, unflinching, behind-the-lines story of one man's time in the war on drugs and gangs, his surprising relationships and emotional attachment toward the ones he sought to stop, and his descent into a life that most people can't imagine. Tegan Broadwater came out on the other end, a year and a half later, a changed man. He also learned a few things. The purported war on drugs is still futile, gang life and the violence associated with it can be thwarted, and there is a dire need for strategically mentoring the children who become inadvertent victims in these operations. Breaking the cycle of violence, removing of the acceptance of young, urban youth from having multiple children without a life plan, and mentoring children of incarcerated parents is the best place to start a true war against gang and drug violence on our American streets.

What listeners say about Life in the Fish Bowl

Words can't describe how astonishing this story is

My friend, who is a police officer for the Fort Worth PD, recommended this book to me; since I'm an avid reader of true crime novels. I was shocked when they told me about these events because I lived in Tarrant County when this unfolded but never heard about it from in media.

I LOVE the fact that Tegan wrote and narratorated his journey. You can hear the sincerity, passion and determination of his avidity to make a difference.
The fact that he includes his belief, faith and ultimate trust in God is simply beautiful. Tegan accepted & conquered a challenge most men would have turn down always remembered the One who brought him through to the end.

I could go on & on about everything that makes this book different from all the other true crime books. Instead I will highly recommend it!

well worth the credit. better than I had expected and will listen to again sometime

does not seem real . you beating up guys in the hood. half ass story from a white cop

This book is an absolute must for any real fan of true crime, especially if you’re from Fort Worth.

Is great good place of story. Would be a good movie. Or TV. Show. Check this out.

Where does Life in the Fish Bowl rank among all the audiobooks you’ve listened to so far?

It's up there and would have been higher had he had a narrator that would have been able to do different voices like in the book Gang Leader for a Day. Love that all the proceeds go to a charity to help with changing folks that are caught up in this life, at least that's what his business site states.

What was one of the most memorable moments of Life in the Fish Bowl?

All the moments he was uncertain of what the intentions of his gang affiliates were going to do during these drug deals.

I think he got it right, Life in the Fish Bowl.