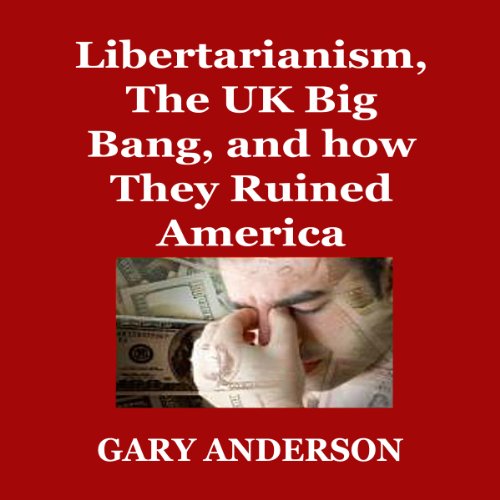 Libertarianism, the UK Big Bang, and How They Ruined America

This audiobook exposes crucial activities by libertarians with regard to Big Bang of deregulation in the UK and how that deregulation came to hurt main street USA!

Libertarian thought receives very little criticism as to its assumptions. We all have a libertine streak within us. However, that desire for unbridled freedom is quite different than formal libertarian philosophy. Becoming a libertarian requires buying into the assumptions of that philosophy.

The utopian ideals of the movement include some noble virtues, such as the elevation of peace and self reliance. However, other assumptions about human nature are simply not based in real observation. This relates not only to their views about race and economics, but about their views of the role of government in our lives. All Americans should have a healthy mistrust of government, because that is how a democracy should work.

However, libertarian assumptions go way too far. There are other institutions besides government that have proven themselves untrustworthy, such as the too-big-to-fail banks in the United States and even the Federal Reserve Bank. While I am in agreement with the Libertarians on that score, the libertarian solution is not in the interest of main street at all. We can look into those institutions as well as into European and UK economic behavior for answers for how we should view libertarianism going forward.

What listeners say about Libertarianism, the UK Big Bang, and How They Ruined America

The author knows very well that the source of the housing collapse was easy money. then in the very next chapter he says that we need easy money, just regulate it a way to make it better. THEN in the very next chapter admits that regulations on banks is "impossible" and says it is "like playing wak-a-mole". He legitimately ignores the concept the government created the FED which creats the Easy Money. On top of that, chapter 8 is 95% Ad-hominem against Ron Paul. Save your money. This book is a good book if you want to sharpen your understanding of arguments for tyranny but not of the subject itself. I finished the dumpster fire of a book and will not be asking for a refund out of respect of the work that created it. I do, however, regret paying 7 bucks for though.

I honestly think he wanted to write a Hit piece against Ron Paul but did not want to understand actual Libertarian ideas. He does not show any respect for anybody involved. One could say that he believes the ideas and those who believes them do not deserve respect. But I ask you, if he refuses to respect the ideas and the persons that believe then, how can he expect people to respect him and this digital toilet paper.