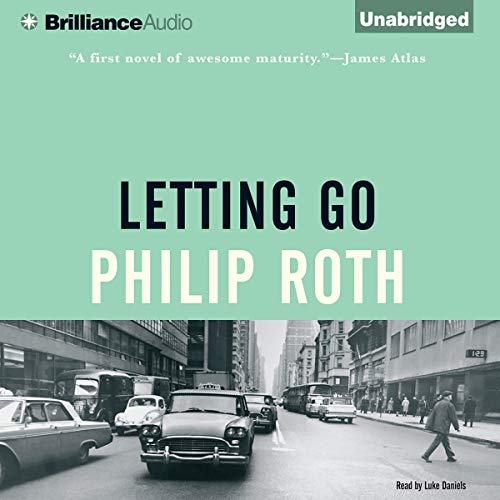 By: Philip Roth
Narrated by: Luke Daniels
Try for £0.00

Letting Go is Philip Roth's first full-length novel, published just after Goodbye, Columbus, when he was 29. Set in 1950s Chicago, New York, and Iowa City, Letting Go presents as brilliant a fictional portrait as we have of a mid-century America defined by social and ethical constraints, and by moral compulsions conspicuously different from those of today.

Newly discharged from the Korean War army, reeling from his mother's recent death, freed from old attachments and hungrily seeking others, Gabe Wallach is drawn to Paul Herz, a fellow graduate student in literature, and to Libby, Paul's moody, intense wife. Gabe's desire to be connected to the ordered "world of feeling" that he finds in books is first tested vicariously by the anarchy of the Herzes' struggles with responsible adulthood and then by his own eager love affairs.

Driven by the desire to live seriously and act generously, Gabe meets an impassable test in the person of Martha Reganhart, a spirited, outspoken, divorced mother of two, a formidable woman who, according to critic James Atlas, is masterfully portrayed with "depth and resonance."

The complex liaison between Gabe and Martha, and Gabe's moral enthusiasm for the trials of others, are at the heart of this ambitious first novel.

"A first novel of awesome maturity." (James Atlas)
"A rich book, full of incident, wry and sad and even in its most desolating scene somehow amusing." (Elizabeth Hardwick, Harper's)
"[Roth] has the finest eye for the details of American life since Sinclair Lewis." (Stanley Edgar Hyman)

What listeners say about Letting Go

Really want to listen but Luke Daniel's voice is so annoying, high-pitched and uninspiring I cannot bear to listen. Going round in circles trying to return for a refund on my Android. Do I really have to get a computer to effect this and if so why can the facility not exist on my smartphone? I feel someone is being protectionist.

Philip Roth’s later work is brilliant. However, his early writing, including “Letting Go” is a little more challenging to engage in.

Are you a Phillip Roth fan?

Maybe you missed this one.l enjoyed this novel...the narration was very good and made it worth the time.

There's a documentary-like feel to this novel. Everyone feels so real. We see the full range of their lives -- their dreams, desires, compromises, expectations, pettiness. The problem for me was they weren't very interesting. Perhaps when this was written, it was revealing -- people didn't live like they do in a 50s sitcom. Today, though, it's old hat that people have unwholesome desires and sometimes act upon them. The prose is excellent, of course, and the narration, except for the nasally dialogue the narrator uses for one of the children (whichi is incredibly annoying), is good.

No question about it, Mr Roth attended his English lessons. Excellent vocabulary, but what's the point of any excellency if it is used to dwell in muck. The author just wallows on the worse of human soul. Not even down right evil, just nagging pettiness. I've made it to half the book, and I just can't listen to another line of it. He definitely has gathered a wide range of characters decidedly enjoying their separate miseries, not a trace of "letting go" until now, just hanging on and on and on to their unhappiness until one just has to let go of this book. What's the point of listening to people's whining for another second. First audio book I won't finish.