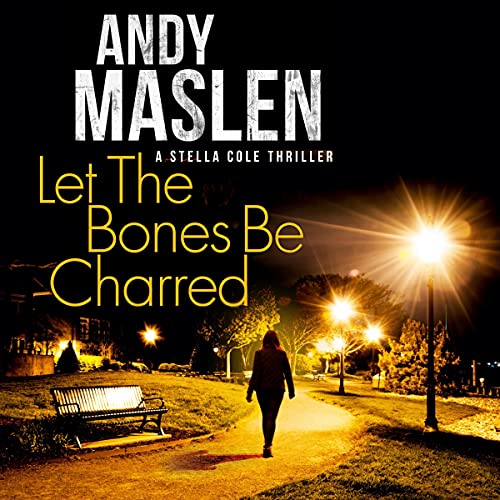 Let the Bones Be Charred

The glamorous CEO of an anti-abortion charity has been found horribly mutilated and strangled to death in her own kitchen. Before long, the killer strikes again, and again. And now the pattern emerges. The victims are all high-profile Christians.

Back from the brink of killing herself, and newly promoted to DCI, Stella Cole takes a call from her sergeant that puts her plans on hold. Stella and her team at the Special Investigations Unit are racing to stop the serial killer dubbed “Lucifer” by the media, before he can take another life.

To add to Stella’s problems, London’s ambitious Deputy Mayor for Policing and Crime is interfering in her investigation, and someone on the inside is leaking details to the press.

Let The Bones be Charred is the fourth book in this series of hard-hitting crime thrillers. Following Stella’s recovery from the murders of her husband and child, it brings the troubled detective face to face with a serial killer with a grudge against the Church. The action takes place in the long hot summer of 2018.

Can she track down and stop the killer before any more women are murdered? Including the wife of a university professor who may, just, hold the key to the killer’s motivations and methods.

Grab Your Copy of Let the Bones Be Charred.

What listeners say about Let the Bones Be Charred

The narrators accents were so bad that it ruined the listening experience. Not only did they sound nothing like they should have but they kept changing throughout. So the Welsh character veered between west midlands, manchester, liverpool and india. The character supposedly from Edinburgh did sound vaguely scottish but her accent changed every time she spoke, and the Yorkshire accent was simply a parody of a northerner. If an author is using characters with accents then audible should ensure the narrator can do them.

I loved the story, but the narrator made an awful mistake with her chosen accents. basically she was rubbish.

Give up on the regional accents

Excellent read, should be 7 stars!

I generally just tick the star rating. But on this occasion had to leave a review. The book was brilliant. What a wide ride. I was swept away by this tsunami of a story. If you love crime thrillers, this will not disappoint. Thank you Andy Maslen. Can wait to read book 5 now.

I was dubious, when I started listening to this one, i was convinced I'd already read/listened to it, so familiar was the introduction, however, I could not have been more wrong, this is one amazing book, all of this series has been amazing but this one seems even better than the first three, possibly because of the long wait I've endured for it to be released, but I enjoyed it immensely.
It is true that the narrator is not good with accents, at all, but she is a good narrator nonetheless and should not be discounted because of her terrible Scottish (and other) accents, she does have some irritating mispronunciations that drive me mad too but we all say things differently and this should not be held against us.
My recommendation is that you buy this if you've enjoyed the previous Stella Cole titles because you will LOVE this one, if you've never tried them, then start at book one (Hit and Run), you'll not be sorry.

This is a good book spoilt terribly by the narrators efforts at regional accents. Her Scottish accents are appalling and at times impossible to understand

Was this a good book? Unfortunately i don't know as narrator was terrible, a real strain to understand what was being said! Pity.

Too over the top for me. The book
starts well with a police procedural
hunt for a nasty killer. Gradually the
momentum runs away with the
author's plot. It reminds me of Silence of the Lambs which leads
too closely along the edges of revealing madness / horror.

After listening to the first 3 of these books, I was intrigued and enjoyed, but found I had to skip chapters because the intense detailing of horrible acts described way to much gore for my taste. Book 4 got worse and uglier, and after skipping chapter after chapter I finally dumped it. I read to enjoy, this book made me nauseous.