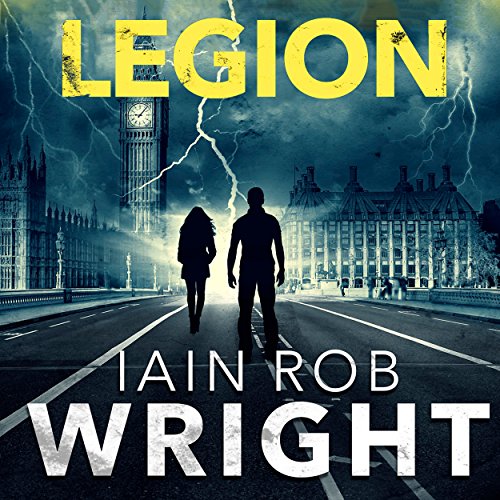 By: Iain Rob Wright
Narrated by: Nigel Patterson
Try for £0.00

What will you do when the world ends? That's a question that needs answering quickly when the gates to Hell open up all over Earth. Taking place across the globe is an apocalypse like no other, as humanity finds itself at war against a smart and merciless foe. Follow the struggles of survival with several characters, as things go from bad to worse. Humanity is dwindling.

Vamps has never been anything more than a kid on the streets, but when those streets become a war zone, he and his childhood friends are forced to step up and become heroes - not an easy thing to do for a bunch of gangsters. It doesn't help matters that a rival gang is also out for their blood and that a group of humans seem to be helping the enemy.

Hernandez is a US Navy Lieutenant with a bright, neatly planned future. That is until the world ends and a chance encounter with a rogue Coast Guard Captain leaves his future in disarray. It will take a lot of hard work, planning, and manipulation to take back the reigns of his destiny, and punish those who have crossed him.

Richard Honeywell is a police office at a time when being a police officer is the least safe thing a person can do. The world is at war, but Richard still has a duty to keep the peace and protect the citizens of the United Kingdom. Yet, how can he do that when his own family are in danger? People are looking to him for leadership, but how do you lead army of civilians to certain death?

The world must come together and fight back against the unstoppable Legions of Hell, because no one is coming to help them. The monsters are real and they will not stop. Welcome to Hell.

What listeners say about Legion: An Apocalyptic Horror Novel

After loving the first book, I immediately purchased this an again, a good book with a more than capable narrator. However I am disappointed with the repetitivness and minimal plot progression. At least half of this book simply re-covers the same events as the first but from another characters perspective and where, in the first, character 'a' meets a minor character, we now follow that minor characters story. This inevitably means we hear the same conversations/interactions as they intertwine with other characters.

Loved it. The use of language was engaging without profound crudity. Need to start the next book immediately!

Love this story collection so much. Starting the next one as soon as possible. Amazing

Have no idea what the final few chapters were about. Shame that Dylan and his dad didn't die horribly. Enjoyed the first 19 chapters.

And so the story continues... actually exactly the same events as the first book, but from the point of view of different characters, giving an excellent rounded view of what is going on. Then the story continues with the weight of more characters you care about, knowing at least some of their backstories. And now part three awaits...

A truly terrible book which is still entertaining

Well worth a listen but...

This is actually a really interesting and well thought out story. Nigel Patterson's performance is pretty good too if you can ignore his horrendous portrayal of Vamps and the accents of the urban London gangs. He makes them all sound like 50+ yr old van drivers.
That aside, well worth a listen.


This is book two of the Hell on Earth series. Legion takes place parallel to events in book one. We see what these smaller, but not less interesting, characters were doing during book one and we see their stories catch up to present. Good follow up in the series

I devoured book 1 of this and couldn't wait to listen to this one as 2 ended on a cliffhanger of sorts. Well, this was just as good!!

While this is book 2, it also tells the stories of some of the minor characters from book 1 from when the rocks first appear and continues on the stories of the major characters of book 1. I absolutely loved that the author did this!! It was awesome to figure out Vamps' story and get to know his ragged group more. We meet Hernandez, whose life doesn't go according to his plans. We meet Richard, a police officer trying to do his job, all the while trying to keep his wife and son alive! We also get to see how Guy, Rick and a few of the other characters are doing.

As with the first, the author sure knows how to tell a tale!! His characters are amazing. Vamp and his buddies are thugs but step up when things go to hell. Hernandez is crazy and boy does the author write him well!! Richard was awesome. He is brave but is also just a man. He knows his job is to protect civilians, but he also just wants to grab his wife and son and run and hide. Each was so well written and developed'

Again, the plot was fast paced and addicting. The gates are spewing out beast after beast, whom are all but unstoppable and humanity is on the brink! What I love about this series is that not only is the plot dark and disturbing, but it tells the story of how humanity will strive to survive, no matter what.

In all, an amazing book and an even better series. I can NOT wait to see what the author brings to the table next!!! Bring on book 3 :)

Nigel Patterson again did an amazing job! He really is such an easy to listen to narrator and has a pleasant voice. He knew how to amp up the tension in this story and bring it to life. If you're knew to audios, he is a narrator to try.

*I received a free copy of this but voluntarily reviewed it. This in no way affected nor influenced my thoughts.*

This was a great second book in a series!A lot of the same stuff going on,but who doesn't like zombies,sea demons and giants killing people and a complete let down of society?Nigel Patterson,always a terrific narrator,does a great job with the material.I am hoping for a book 3.I was given this book by the author,narrator or publisher for free.

While I don't normally write reviews, I wanted to for this book. I thought the first was great but this just continued and then blew The Gates out of the water. No spoiler but I loved the little homage to the Tenderloins by way of the Cheeseburgers.😋

Well done with a side burnt ends

Another very enjoyable tale about demons both human and otherwise. While handling the carnage of a massive demon invasion well, where this story really shines is the characters and their stories within the story. I recommend you read some of his earlier works to fully enjoy this book. While it can stand alone and be worth your time, you're much better off with more back story. May the Lucas be with you.

Narrator was good and added a life to the individual characters. The story telling keeps involved and with just enough twists to keep you guessing.

I give 5 stars all across. The narration and story were great. I loved how this went a little more into what happened to people before they met up with others. I really enjoyed the story.

What an awesome and exciting book to listen to. Love the way the story is coming along keeping me glue to it while at work. on to book 2.5 and then 3.

Hell is coming to Earth! Gates have opened all over the Earth and the demons are pouring in. This is worse than the apocalypse talked about in the Bible. The demons are trying to eliminate humanity to weaken God.

A few stories from The Gates continue in Legion. I highly recommend listening to The Gates first! Some people you'd never expect rise up to take on the demons and help their fellow man.

Great narration by Nigel Patterson. I really enjoy his accent. He does a good American accent as well. He did a great job with each of the characters! Looking forward to book 3!

Wow, did it again!

Would you consider the audio edition of Legion: An Apocalyptic Horror Novel to be better than the print version?

Definitely. The individual characters come alive with narrator's different tones for them.

It's gotta be Vamps. He's the central character of course. Why? Because the author really makes him believable.

What does Nigel Patterson bring to the story that you wouldn’t experience if you just read the book?

His different tones of vioce for the "experience".

If you could rename Legion: An Apocalyptic Horror Novel, what would you call it?