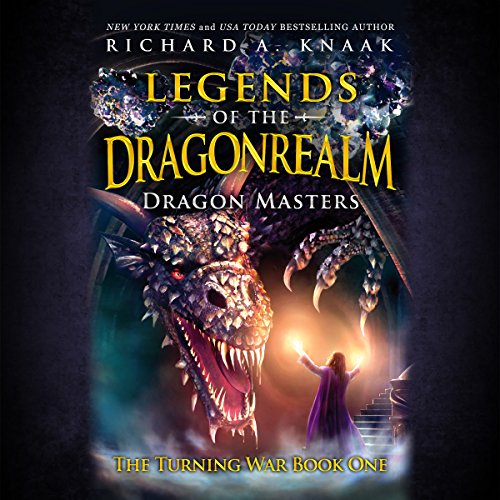 Legends of the Dragonrealm: Dragon Masters

The Turning War, Book One
By: Richard A. Knaak
Narrated by: Heather Hershow
Length: 9 hrs and 18 mins
Categories: Sci-Fi & Fantasy, Sword & Sorcery
5 out of 5 stars 5.0 (2 ratings)

Legends of the Dragonrealm: Dragon Masters

By: Richard A. Knaak
Narrated by: Heather Hershow

The first audiobook in a new trilogy about the beginnings of the Dragonrealm.

At long last, the true story of the mage-led rebellion against the rule of the Dragon Kings that two centuries later, continues to affect all those inhabiting the Dragonrealm!

Some 200 years before Cabe Bedlam was thrust into the machinations of the Dragon Kings, his grandfather Nathan led a band of wizards against the drake lords, in the hopes of freeing the realms of their tyrannical rule. Yet, the truth behind that story is not a simple one. Here now, is the dawn of the Turning War, a pivotal moment in the Dragonrealm, and the startling creation of the first band to stand against the drake lords; The Dragon Masters.

The producers of this audio book should be ashamed

What disappointed you about Legends of the Dragonrealm: Dragon Masters?

The production quality was poor. Words were clipped, pauses between sentences were too short. At times there was a slight echo, like if she were speaking in a very large room. If I could have slowed the playback to about .9 of normal that would probably have been perfect. In any given chapter, the scene changed without warning. Most times, the first sentence of the new scene would not include any information about who was speaking, plus the narrator made little to no attempt at providing a different voice for each character, so I'd attribute the text to the wrong character, realize it did not make sense and then have to re-listen to the section.

Would you ever listen to anything by Richard A. Knaak again?

Would you be willing to try another one of Heather Hershow’s performances?

Ms. Hershow has a beautiful voice, but I think it's ill suited to fiction. If she read a non fiction book that I was interested in, I would read it.

The Dragonrealm has always been fascinating, the author leaves little hooks of information that make you wonder what the backstory is, and the progression of the series has filled in the gaps showing that there could be a huge plot bible that I would love to read.

I love the dragon realm books, however, this reader is questionable. The chapters have huge differences in clarity and volume. Overall it is alright, not great, but not terrible.

Probably better to read others in the series first

Let me begin by saying this was my first experience in the Dragon Realm, so I have no prior knowledge of the world or characters.

The narrator was very good, particularly with the Dragon voices. However, she struggled to create the depth of male voices (considering there's not a single female main character, I have to wonder what possessed them to go with a female narrator...)

I suspect it's because it's my first time in the world, but I spent nearly half the book in a state of confusion.

In the end, the characters were very well developed and the story well thought out. But as is the case for many shorter fantasy books, it seems to jump around to many locations and events without spending enough time on any of them.

That being said, however, the book has a powerhouse ending that makes every other weakness more than worthwhile.

It was an interesting story and I think it has potential but I feel like there was a lot of missed opportunities in this book. While I don't expect every character to be totally fleshed out in one novel, I would think you could manage something. Instead it feels like each character just had their personalities just kinda pasted together. Many of them just have random potential without giving any real explanation as to how they gained their powers or what is is that makes them so special. Maybe that will be addressed in future books?

The Narrator did a good job but it seemed like for the entire book she was reading in a room with a horrible echo, even when she spoke soft he voice would bounce back. Further it wouldn't hurt to slow the pace just a bit. It felt like she was rushing through the readings. No more would a chapter end without much of any pause she'd read the Chapter #, The Chapter Title and then right into the story itself. A good pause would help the listener transition.

All in all I'd still give the book 4 stars and I do hope that future books get better.