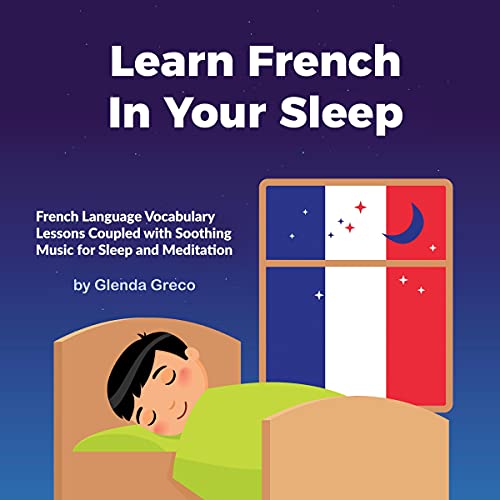 Learn French in Your Sleep

By: Glenda Greco
Narrated by: Marie-Pierre
Try for £0.00

Want to expand your French vocabulary with almost no effort? Then keep listening.

Are you planning a trip to France? Or sharpening your skills for work? Just press play on this audiobook when you’re sleeping, meditating, or doing chores around the house.

Learn new vocabulary while actively listening, or passively while you’re doing other things.

I'm sure your first question is: Can you actually learn a foreign language while you’re asleep? Well, according to a Swiss research study in 2014, the answer is unassailably, yes! In this study, a group of German speakers was given a list of unfamiliar Dutch words to study. Half were instructed to get some sleep, while they listened to long lists of Dutch words and translations. The other half was instructed to stay awake. Four hours later, they were tested and the group that listened while they slept had significantly higher recall. The study concluded that people can indeed absorb new information passively during non-REM sleep - which is the deep sleep we get in the first few hours of the night.

This audiobook is divided into six chapters, each with different kinds of vocabulary, and with different music. Choose a different chapter each night, or loop the audiobook to have a continuous stream. Some listeners - those with more experience with the foreign language - have reported that these recordings allow them to dream in that language!

Sit back, relax, enjoy, and learn!

What listeners say about Learn French in Your Sleep

Loved it and worked so fast!

I did French as school and thought I had forgotten most of it until I started to listen to this book and I could not believe how much of it came back to me as I listened each night. It’s a great way to re-learn (and to learn) a language and this has really worked for me. I can’t believe how much I can now say after only a week! I am going to keep re-playing at least every month so I don’t forget again. Great book and so easy to listen to and learn!

I use this to just keep up with my French practice during the day. It's made a huge difference and I feel productive even while I'm sleeping! Such a clever idea for those trying to learn a second language. Highly recommend.

I like these books from Glenda! It's a good way to learn languages from these audiobooks. We can just repeat after the narrator with a clear and listenable voice, and keep fresh vocabularies and simple sentences along with concentrating music. Often listen to it before going to sleep. I'd recommend it to beginners who'd like to learn French easily!

This is Very Good! Wake Up To A New Language 👌

An excellent concept. This is my second book of this author. I have been listening to 'Learn Spanish in Your Sleep' for a month now and I found a significant improvement in my speech. I was pleasantly surprised as I had actually learnt a lot without working too hard and without spending too much time on it! Author Glenda Greco's methods are very good and they yield rich dividends.

I got this book 'Learn French in Your Sleep', for my kids as they are learning French in school. My idea was to use this book & its method on my kids so they can get more fluent in speaking French. Though it's just been a few weeks, it is still working as a charm!

What I like about the book is that the author Glenda Greco:
- Is an expert in this field, as she already has 3 books in the market: 'Learn Spanish, Learn Italian & Learn French in Your Sleep' and she knows what she is doing!
- She has arranged the book in such a manner that when you listen to it once you get a good handle on the new language as there are lots of words & expressions that are usually used in real life,
- The words & expressions are first said in French, then explained in English, and lastly repeated in French again. This format helps a lot,
- There is some gap after every word & expression and that gives us time to repeat them out loud or in our mind so this way the new vocabulary can be cemented in our mind.

My kids are happy and I am noticing a fluency when they practice French between them.

Last, but not the least, the narration of Marie-Pierre is excellent. Being French, her diction, be it English or French, is heavenly!

I have gifted this book to a friend of mine and would highly recommend this book to anyone who likes to learn new languages but cannot find enough time for it. Get these series of book by Glenda Greco and wakeup to a new language!

I have a few of these books from this author, I am very interested in languages and these books are just amazing when trying to pick up the language, I love listening to them before I go to sleep they’re so relaxing. These books are a great concept, i 100% recommend you purchase these if your french is a little rusty

I listen to the audiobook in the evening while I fall asleep. It has variety of sayings that speaks to the subconscious mind. I love the soothing music in the background too.

Wish they taught this in school!

This book was way more helpful then my school teacher growing up. This book would have made it SOOO much easier! Narration and music made it such a great listen and easy to follow along while learning a 2nd language! Thanks so much for recording this!! Cheers

who knew sleep could be so productive!

Such A Genius Idea For a Book

I listened to this book at night just out of curiosity and could not believe it actually worked after a week or two. I definitely knew more French but I also found this so relaxing to listen to before I went to sleep. The perfect way to learn a new language and so convenient for a busy lifestyle.

Shocked that it works!

I was pretty skeptical when I bought this book because come on, learning a new language in your sleep? impossible! but boy was I wrong!! I took french back in middle school and I actually really enjoyed it. Now I would love to relearn it and ass it to my language resume. I turned it on as I fell asleep every night (love the narrator btw) and by day 3/4 I was noticing that random french words would pop in my head or I would just hear them in my mind!! It was pretty incredible! If you are busy and very on the go and want to learn a new language this is definitely worth a try. The night is the only time I have so this has shockingly been amazing and I'm so grateful. Cannot wait to keep going!!

The book has lots of beginner level vocabulary and build off of it. Going to keep using it until I can speak and understand French fluently.

This is a great blend of key vocabulary and relaxing music. The vocab is organised logically by theme including numbers, colors etc and the narrator really does an excellent job of enunciating the words really slowly so you can get the full pronunciation. Great job and a fantastic way to learn French!

There's a lot here and it's very useful to help you learn many words.

I didn't think it would work, but it did!

HaHaHa, I fell asleep! I listened to it again the next day to see if it worked and I actually recognized and understood some of it! I guess this really does work! I've always wanted to learn French, now I can. The accent of the narrator was a little strong and a bit fast to understand longer words/phrases but it was refreshing to hear. Thank you.

I love this book. It is so soothing and has really helped with my sleep :-). I don't know how much I learned while sleeping, but I've listened to this book 3 times now, and I learn something new every time(awake :-). I highly recommend this book.

Have been putting this on before bed every night to build up my French vocabulary. After the first week, I started noticing results. Sometimes throughout my day, I find myself replacing words with French words or terms, and feel like I am familiar with the tense structure of French without having readily spoken it.

Great for brushing up on your french skills !

I used to be able to hold a conversation in French and after not using the language in over 7 years I completely lost it, however, after listening to this audiobook it all came flooding back. I would highly recommend this to anyone looking to refresh their memory when it comes to french vocab. Loved it !

Perfect for sleep and language learning

I love these quiet, meditative apps and books, they really help unwind and declutter my mind after long days. But even better when I'm reinforcing the French I'm learning. And it's true we absorb so much more before bed, it's counterintuitive but I have such good recall the next morning, it's pretty amazing. Very good listening, get two in one !

The balance between voice and music was love.

I loved this. I feel it improved my sleep experience as well,I loved the background music and the content was very good.

I'd recommend it all who want to learn French while sleeping. Amazing experience.