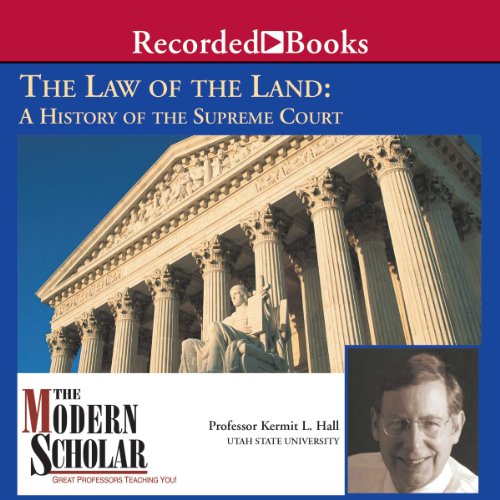 Law of the Land

A History of the Supreme Court
By: Professor Kermit Hall
Narrated by: Kermit Hall
Length: 8 hrs and 18 mins
Categories: Education, Study Guides
1 out of 5 stars 1.0 (1 rating)

Law of the Land

The Judiciary in general and the Supreme Court of the United States in particular represent the republic's most unusual and least understood branch of government. Unlike the elected executive and legislative branches, the justices of the Supreme Court are appointed and serve during good behavior. Therefore they enjoy a degree of independence from the direct winds of politics that truly sets them apart. Moreover, while the cases before them are always heard in public, they are always decided in private - in conferences that the justices alone attend. What goes on both in open court and behind closed doors? What is the decision-making process and what considerations are taken into account? To what degree do tradition, politics, and precedent play a role? How are the justices, through their decisions, direct interpreters of constitutional law?This course explores the court as a living, breathing institution - one subject to the press of public opinion yet removed from its direct impact - one whose members have as often as not been vilified or praised. Listeners will come to know the court through a thorough study of its most significant decisions. The individual lectures explore both the personalities and legal reasoning behind, as well as the political impact of, these landmark cases. In the end, students will arrive at a solid understanding of the high court, its justices, its traditions, and, most importantly, its impact on the American Republic, not only today, but over the previous two centuries.
©2003 Kermit L. Hall (P)2003 Recorded Books

Summary of the facts and consequences of each case. Better title for book as it is misleading.

What was most disappointing about Kermit Hall’s story?

I have about 20 modern scholar audio books. This one is by far the most difficult to follow. It is the only one I almost stopped listening to in the middle. The title is misleading as it follows "important" cases as a way of following history. There are many facts and discussions about each justice in each case. A wrap up and less detail about each person would have helped. It was overwhelming...

It's not a history of the Supreme Court. Rather it's the Lecturer's use of ten(IIRC) cases to create an intellectual history of American Jurisprudence. It's very rhetorical. The Lecturer is looking to make his own point about the Court, so he picks cases and marshals appropriate facts (like any good lawyer) to support his view about the Court as an "ongoing Constitutional Convention." I was originally leaning towards three stars, but - while the lecturer's position is well-argued - occasionally he cuts far too sharp a read on the facts to make me wholly comfortable.

Great review of the history and constitutional issues of the U.S. Supreme Court since the 18th century.

I loved the professor giving additional books at the end of each chapter.