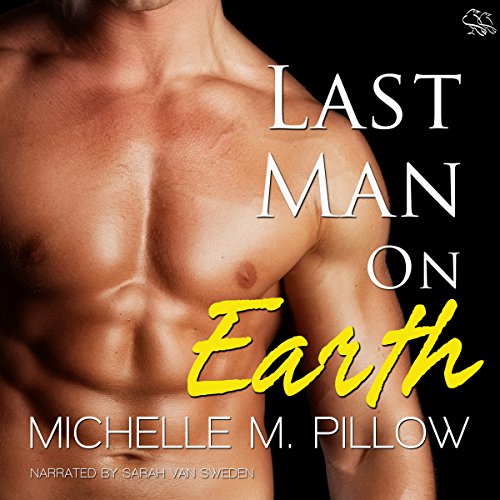 Dr. Micco Hagan has been charged with pairing up the last of Earth's survivors based on genetics for optimal survival of the species. He can't resist the opportunity to be with his dream girl Rena Gates. Though she rejected him before the Earth ended, he hopes now she'll find a soft spot for him.

In the time before, Rena thought Micco had only come on to her to win a bet. She never expected them to be rescued together, or to be eventually partnered. Unable to resist following orders, she discovers they have a lot more going for them than DNA matching. The sex is explosive, but can it eventually grow into love?

What listeners say about Last Man on Earth

Interesting but way too short

This was an interesting story but it was way, way too short. I would love to see some expansion on it.
Also, the narration wasn't that great. the inflection in the voice sounded robotic and stilted.

she var to inconsistent, and there was no nuances in her voice. she could just as well be reading the obituaries.

I have never not finished a book. but 20 min in and i guit. the narrator just butchered the story.

Interesting story wish it was longer

I love Michelle Pillow’s books this one included. This is a short story against the background of climate catastrophe. I liked the characters Rena and Micco and enjoyed their story. I would have loved a longer story but it’s a great book when you looking for something quick.

It was a good story, but I didn't care for the narration. I got it because I always like books by Michelle Pillow

Be careful what you say.

Would you listen to Last Man on Earth again? Why?

Sure, it was a short, sexy fun listen.

What was one of the most memorable moments of Last Man on Earth?

I am a huge fan of Ms Pillow and have many of her books and am starting to get a decent collection of audios. This was a short listen and just what I had time for. There is plenty of steam. At a function some years ago some booze, a possible bet and a spill brought on a verbal "If you were the last man on earth...." profession. Little did she know that it would very nearly be true the next time she had to deal with Nikko. The world as we know it has almost been lost, now in an underwater home built to house some of the few remaining people she has been paired with him as a spouse--must do their part to repopulate the world. Now what? Enjoy with them as they find out.

I like the premise of the book, fight for survival of the human race scifi story with a touch of romance, some hot sexy scenes, with a good ending for the main characters.
Ms. Sweden has a great voice, clear diction and nuances for different emotions, but the male characters are not quite there.

Another amazing story by Michelle Pillow. It is a very fast listen but I still was upset the few times I was interrupted. Michelle draws you in to their world and you feel like you are part of this apocalyptic society where people are paired off due to genetics. Rena is chosen to be with Micco a man she met before the end of the world. A man who she is attracted to but was hurt by in the past. I love how they come together I just wish it was longer. I would love to see where they go from here.

Can a failed pickup

YES! it's a fun short read

What other book might you compare Last Man on Earth to and why?

granted it is not a shifter story, but it has a similar vibe as the Bird of Prey series by Mandy Roth; little trouble, feisty female, clueless male, few laughs and hot love.

Definitely Rena; Sarah's voice was well suited for her and she managed to portray the ire I expected in Rena's character beautifully!

That moment when Micco confesses his love. Makes me think just how important it is to tell those you love that you do; you never know when the chance can be lost forever

Well we finally did it, killed the planet and Mother Nature decided she was better off without us and made Earth uninhabitable. Fortunately some were able to escape to underwater sanctuaries till things settled down and man could reemerge to try again. Two of these lucky survivors are Micco and Rena; he has wanted her since he first saw her in a bar several years ago, of course he was drunk and had an epic fail trying to pick her up (managed to spill his drink on her very nice, very white, blouse minutes before she was due to give a speech). She has vowed she would not sleep with him if he were “the last man on Earth” and refuses to have anything to do with him even though he truly is one of the last men on Earth (and arguably one the FINEST men even before the fall). Of course with humanity on the brink no one is staying single and they are mandatorily matched, but even in such dire circumstances love can be found! Great, short story! The characters are well thought out and easily identifiable with, the story has an interesting concept and was well laid out, my only real peeve was the catch line was a bit overused, but that’s just me. I really did enjoy it and would recommend it if you are fan of Michelle Pillow’s style!

Sarah Von Sweden has a sweet, clear, light voice; works well with female characters but not always the best for the males. Overall she did a great job with differentiation, diction and was a great pleasure to listen to.

Ever say something you regret? Loved this!

I got a great chuckle out of this book especially the way that Sarah Van Sweden drew saying “Last Man on Earth.” You could just hear the emotion that went behind that phrase. Last Man on Earth was a great story about what happens when you say something that you don’t really mean.

Rena meets Micco three years prior and is embarrassed by his drunken and sloppy pickup lines. She tells him off in that good old fashioned, Not If You Were the Last Man on Earth, way. Now in the present, the human race doesn’t have a bright future and Micco might just be the last man on earth.

Now Rena and Micco have to make a go of things. It was an enjoyment to listen as two shyish people that are attracted to each other try to make a relationship while not getting hurt. I really liked this quick story and look forward to more like it, especially this narrator.