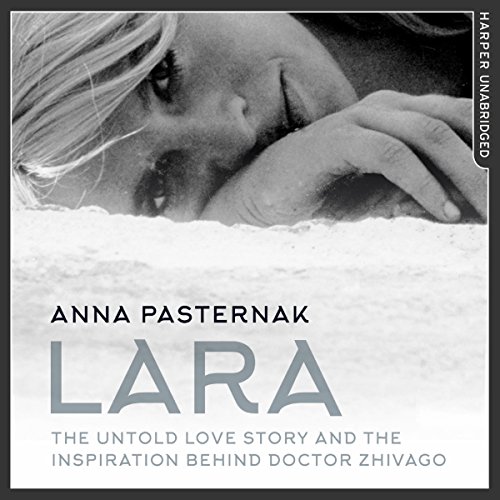 By: Anna Pasternak
Narrated by: Antonia Beamish
Try for £0.00

The heartbreaking story of the passionate love affair between Boris Pasternak and Olga Ivinskaya - the tragic true story that inspired Doctor Zhivago. Though Stalin spared the life of Boris Pasternak, the writer's lover, typist and literary muse Olga was sent twice to Siberian labour camps because of her association with him, miscarrying their child on her first visit. When released, she always assumed that Boris would leave his wife for her, but he failed to do so.

This heartbreaking account by Anna Pasternak explores this hidden act of moral compromise by her great uncle. Drawing on devastating and revelatory family archives, Lara unearths a love story of unimaginable courage, loyalty, suffering, drama and loss. Boris and Olga's affair devastated the Pasternak family, and their saga has since fallen from the common knowledge of Boris Pasternak, who is still regarded as a grand moral influence of his time. This astonishing true history of his love affair throws fascinating new light on his standing, and Pasternak's masterwork, Doctor Zhivago.

"It is not for nothing that you stand at the end of my life, my secret, forbidden angel, under the skies of war and turmoil, you who arose at its beginning under the peaceful skies of childhood." (Yury Zhivago to Lara, from Doctor Zhivago)
"Anna Pasternak does not spare an ounce of drama nor detail from the story of her great uncle's love affair with Olga Ivinskaya, the inspiration for Doctor Zhivago's Lara. The result is a profoundly moving meditation on love, loyalty, and, ultimately, forgiveness." (Amanda Foreman)
"An enchanting love story, wonderfully told." (Sir Ronald Harwood)

What listeners say about Lara: The Untold Love Story That Inspired Doctor Zhivago

A superbly well narrated, informative and enlightening window into personal cost of love in the twentieth century USSR

Epic, grand and very moving, it seems Dr Zhivago is more truthful and truth more heartbreaking than one could reasonably expect...thank god.