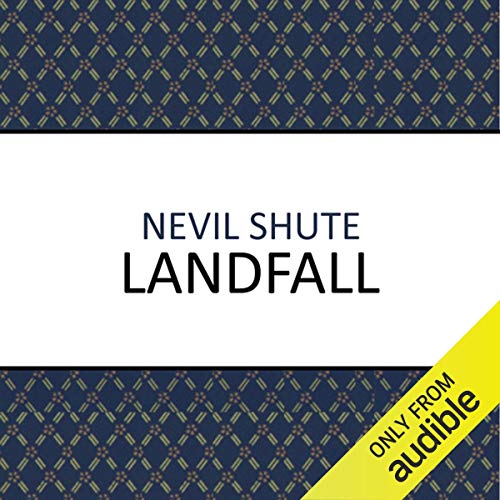 When Jerry Chambers, a fresh-faced young pilot, mistakenly sinks a British submarine, he is punished with a remote posting to test an experimental new bomb; a dangerous mission far away from the girl he loves. While Jerry risks his life, his sweetheart Mona sets about clearing her lover's name... but will she be too late?

The narrator is very good. His voices are varied, but not obtrusive. Even the women are well voiced.
The telling of the story by Shute, like many of books, is sparse, but he keeps the story going. His characters may have different views on what is right, but each wants to do the right thing.
As I was listening I was thinking what an interesting picture this gives off the early days of the war. Food is clearly not short yet - there are references to grapes; people go on from a dance or a pub for a late night supper; one pilot views fighters as being the safest posting. There is no sense of jingoism. Just the intention to get the job done. It was interesting then to realise this was written in 1940. I'm listening with the benefit of hindsight. Shute was living this.

was perfect for a day Ill in bed. was looking for something not too taxing but interesting. am a fan of Nevil white and this was delightfully narrated. an easy take to keep up with..

From all-time favourite read to all-time farourite listen. A real treat awaits your ears with thus.

I liked this story for its simple charm and ships and planes and British mores and language. It is a well-paced yarn with humor, romance, adventure and glimpses of a society that had strengths and depth to persevere in very challenging times. Enjoy

Perfect Listen for a Road Trip

I was happy to find this audible version so we listened to this for a road trip. It's not easy to find books my husband and I both enjoy. Nevil Shute so often does the trick and this is one we both really liked. The less you know about the plot the better. Suffice it to say that Nevil Shute loves airplanes and submarines and all sorts of boats. And gadgets. So this is a theme along with "boy meets girl".
It's not so much the story as the way Nevil Shute tells the story. Things unfold very carefully and in a way that is just so well written. I also just loved the narrator, Chris Rowe.

You can figure out the mystery pretty quickly

What made the experience of listening to Landfall the most enjoyable?

Shute's skill bringing out characters and making them seem real.

Unfortunately, the whole story. It is a mystery but what happened is obvious very early on. That makes the main characters seem amazingly dense, which is not the author's intention. Plots are not always Shute's strong suit, though some books such as Far Country, are great stories.

One of his best!

I have close to fifteen of Nevil Shutes Audible books. 'I would put 'Landfall' easily in my five fav list. If you're interested in WWII from a British perspective, Shutes work is a must. If I could give the reader, Chris Rowe, more than five stars I would. He's really good at his craft!

Chris Rowe's narration is superb and the story is captivating as the mystery unravels. The plot gradually moves toward a crescendo of resolution and the ending is a brain stretcher.