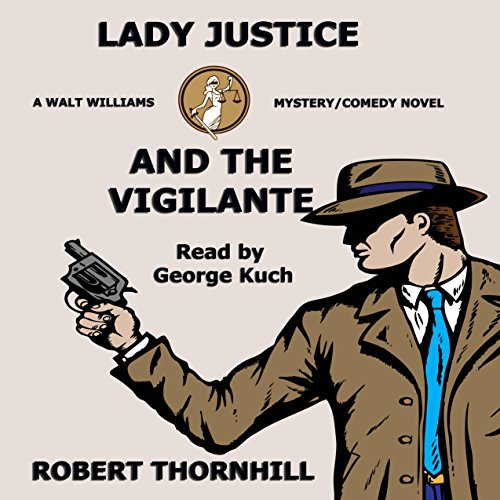 A vigilante is stalking the streets of Kansas City administering his own brand of justice when the justice system fails.

Criminals are being executed right under the noses of the police department.

In Lady Justice and the Vigilante, a new recruit to the City Retiree Action Patrol steps up to help Walt and Ox bring to an end his reign of terror.

But not everyone wants the vigilante stopped. His bold reprisals against the criminal element of Kansas City have inspired the average citizen to take up arms and defend themselves.

As the body count mounts, public opinion is split - is it justice or is it murder?

A moral dilemma that will leave you laughing and weeping.

What listeners say about Lady Justice and the Vigilante

This is the seventh stand alone story in this fabulous Lady Justice series which combines humour, great larger than life but oh-so-real characters, terrific writing and life observations within often hard hitting mystery stories. This time the elderly cop and his colleagues in Kansas City are searching for a killer determined to put right the failure to convict brutal perpetrators of horrible crimes. But life also goes on for Walt, Maggie and the rest of the residents and even police partner, Ox, manages to get a date with Judy, the lady he admires, despite his tongue tied approach. Plus there are the Thanksgiving and Christmas celebrations ... But not everything goes well.

As always, George Kuch is Walt Williams as he relates all that happens and tells tales about his fabulous friends. Kuch is pace perfect with the anecdotes and reminiscences of the 67 years old cop, his voice full of compassion and fun, contemplative or steady as he tells all from Walt's point of view.Brilliant book made even better by the narration. Something for everyone and highly recommended.

I enjoyed this book. Again the author gets you questioning the world we live in, in a serious but funny way. The characters he writes about are so different that he has you wondering what he is going to think up next or the funny situation that they are going find themselves in. In this book he tackles so many different situations from robbery to the homeless to child molesting to vigilante to murder, all serious subjects but in Walt's world if you don't make lemonade with lemons you only get sour puss.
When after a number of highly charged cases in court get dismissed, by police technicalities and the defendant walks away Scott free one citizens decides enough is enough.He starts doing what the police have failed to do and that is by taking the bad guys off the street. It's up to Walt and his C.R.A.P team to put a stop to the revenge campaign before an innocent bystander is taken out. However as sides are divided whether it is right or wrong, one of Walt's friends gets caught in the cross hairs and will need her own time in front of Lady Justice.
I like the narrator and hope he continues with the rest of the series as for me he is the voice of rookie cop Walter Williams.

This book was so good. I love this series. Thornhill always chooses such interesting topics to write about and vigilantes are undoubtedly interesting. Walt was, as usual amazing.

What made the experience of listening to Lady Justice and the Vigilante the most enjoyable?


This is a great audiobook and just as good as the other Lady Justice books. This was the 7th book in the series. It is a fast paced mystery/comedy with lots of twists and turns. Walt and his group are amazing and funny. So far I am enjoying this series.

I enjoyed the story, the characters, and the performance. I would of liked to have a sequel to this book but I don't think the ending allowed for that outcome. I highly recommend this for anyone looking for a book that has good characters and is light reading.

I agreed to give an unbiased review in exchange for receiving this audiobook from Audiobook Boom.

The good, the bad,and the irate. A very timely mystery which addresses the dissatisfaction of some with the criminal justice system and the need to protect the rights of all citizens, even the unrepentant guilty. As always, there is enough comic relief and reminders of the humanity of law enforcement, lawyers and judges, and members of the general public. Warning: This book will make you think! I really enjoyed it! The interjection of Ox's change in personal life is great fun.
George Kuch continues to be the perfect match for Walt and the gang.

This book is well written and I really enjoyed it. I also thought that George Kuch did a wonderful job narrating. It was just the perfect combo of good story writing, great characters, and talented narrating that makes this book great. I was kindly provided this free audiobook code by the author, and this is my voluntary unbiased review.

It is always a pleasure to listen to Mr. Thornhill’s books, it is so much fun to see what Walt and his friends get into. Mr. Thornhill knows how to deliver a highly entertaining story filled with near death, humor, danger, a touch of clean romance, there are always moments that you hold your breath, others where you heart skips a beat, I love the humor that fills the book but he gets right down to the heart of the matter, there are times I say oh my and other times where I laugh out loud and everyone in my office thinks I have lost it. No matter what the topic is it is always thrilling, exciting, adventurous. I am always left with a smile on my face and can’t wait to start the next one. You are never lost you always know a touch of what happens in the previous stories, so it doesn’t matter how you read them you always know who is what and what is going on. I highly recommend starting with book one and go from there. I promise you will be entertained

The narrator is truly amazing with his true emotions, his wonderful character voices, he really brings the characters to life, you always know who is talking and what they are feeling. His male voices are just as good as his female ones. There is no background noise, no volume changes, it is a very clear and clean audio. If any breaks were taken I could not tell. He knows how to bring the story to life making you see it in your mind, making you laugh with his dry humor that is right on the money. Walt is so easy to picture him rolling his eyes at the new things they want him to to. This narrator is fast becoming one of my favorites, he has a voice that is strong, but he is able to really touch on the emotional things to make you feel the effect the author wants you to feel.

This is a story that is really for anyone, it is truly entertaining, and will keep you on your toes. I just love this author and narrator.

Walt and Ox are once again in the thick of it. On one patrol they head into a bar to act as backup for another cop. To their surprise the cop is a woman and Ox is totally gobsmacked. Later the two of them are pulled into court and for the second time the prisoner is given his walking papers. A vigilante comes onto the scene to help Lady Justice balance out the score. Now the city is torn into two---the main question being if the vigilante guilty of murder or a hero. So now Walt and Ox have to walk a line between a vigilante and his purpose and Ox's infatuation with the new woman cop.
George Kuch is a perfect fit for Walt and his friends!
Another fantastic audio and story!!

This series have a great mystery series that Walt is investigating. I definitely love the humor. The Narrator does a fantastic job at bringing the voices out. I love the sarcasm and humor. This one definitely keeps you enthralled all the way through the audio. The Author has a very creative gift of bringing the story alive. I definitely recommend.
Shauna Joesten

Lady Justice and the Vigilante Book 7

The voices used by George Kuch are perfect for the characters.

Lady justice series will keep you laughing and wonder what the the hell will these old folks do next. Maggie and Walt make a good team even though she is not part of the “CRAP” team. The entire story line is fantastic keep them coming back for more.
I received this free for an honest review from the author or narrator

I love this series!!! Great book!! Very easy listen and between the author and narrator, it’s a great combination!!!