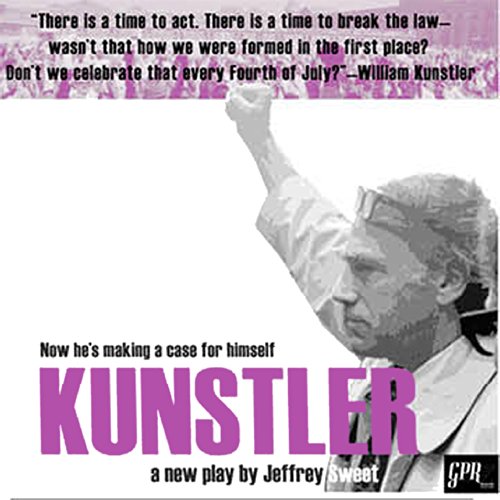 The world premier recording brings to life William Moses Kunstler who journeyed from comfortable suburban lawyer to America's most revered and reviled attorney for the civil rights and radical movements of the last half of the 20th Century. This is the perfect recording for lawyers, judges or anyone remotely interested in the law. Plus it is an intimate look into our country's most radical decades.

"Wise and revealing....Jeff McCarthy seduces his audience…(he) has the Kunstler style down pat, with disheveled gray hair, eyeglasses worn most often on the top of his head and a demeanor that seems to say, 'I don’t have to try very hard to be brilliant and adorable'.... an eye-opening history lesson." (New York Times)
"Ingenious…riveting...Jeffrey Sweet’s galvanizing play about the controversial counselor, famous (and infamous) for defending social activists during the 1960s and ‘70s and, later, accused rapists, gangsters and terrorists. McCarthy skillfully shoulders a huge burden. Making her directorial debut, well regarded actress O’Toole never lets the energy flag. Along with being admirable theater, a stirring history lesson, and a vivid character portrait, Kunstleris sure to inspire budding lawyers." (Hudson Journal News)
"William Moses Kunstler journeyed from comfortable suburban lawyer to America’s most revered and reviled attorney for the civil rights and radical movements of that last half of the twentieth century. For today’s law students facing an uncertain future in a world posing new threats to liberty, Kunstler illustrates the rewards and risk of living life in the law while remaining true to one's principles. This play brings to life the challenges of fighting for justice before history rendered its verdict on those causes. For students wondering where are the Kunstler's of today, they need look no further than the mirror – if they dare. When I was a law student, Kunstler, the man, changed my life forever. Kunstler, the play, may do the same for you." (Ronald L. Kuby, William Kunstler's law partner)

What listeners say about Kunstler

I already have, to several. One, KUNSTLER is, as director O'Toole put it, a great education on what was going on in the 60's and 70's in our country. Two, the storytelling is superb. Three, the actors are outstanding.

Which character – as performed by Jeff McCarthy and Crystal Dickinson – was your favorite?

It is a tango, a duet, and though Kunstler is the main attraction, the play can't exist without his counterpart: the student. I loved Kunstler, but loved even more the questions the student railed at him after his speech.

Yes. But. I listened to it throughout my day and enjoyed the luxury of being able to savor it.

I was skeptical of 'listening' to a play, and within the first few lines, I knew I needn't have worried. Jeff McCarthy as Kunstler drew me in immediately, and as I said above, the storytelling is so masterful, that I want everyone I know to listen to it immediately. I am in major crush mode with this piece right now.

There are some artists whose seminal work outshines all of their subsequent efforts, and then there are some whose artistry ages well. If we must pull from our simile toolbox, we could compare them to a fine Bordeaux, or to a well made Scotch, though a Lynnae pickle or a Villaggio gorgonzola would be more fun and less tiring. Jeffrey Sweet is of the latter (artists who age well, that is, not a Gorgonzola cheese.

What was one of the most memorable moments of Kunstler?

I listened to the Kunstler performance while traveling away on a business trip, and I enjoyed it so much that I heard it again on my return. The performances by Keona Welch and Jeff McCarthy were outstanding. And not to take anything away from them, but the actors' jobs were made easier with a well written script, this being one of the best. Kunstler is ever so real, basking in the glory of his years, as is the young law student Kerry, his sometimes admirer, part-time nemesis.

Which character – as performed by Jeff McCarthy and Crystal Dickinson – was your favorite?

McCarthy was truly convincing, well seasoned. I would hire him to defend me even knowing he is really an actor.

The language is vivid and alive, and the pace engaging, and if time is a friend to things epicurean, it is also friendly to the legacy of William Kunstler. The various establishment's actions in Attica, Wounded Knee, the Civil Rights movement, and the Chicago Seven, all are an embarrassment, even to this conservative. Give this wonderfully written play a listen, and then hope that it comes live to a stage near you.