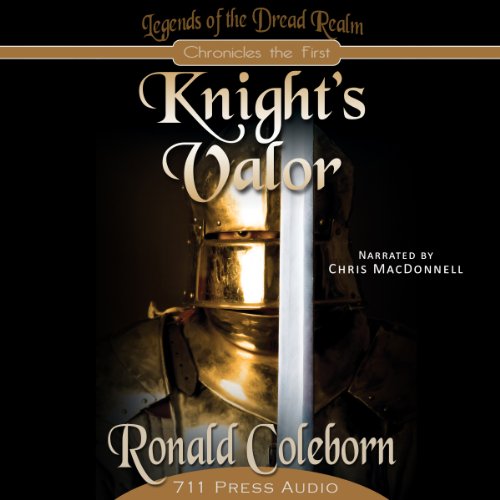 711 Press is a company with a unique twist on publishing: we release "Movies & TV in Book Form." Listen to our thrilling, cinematic titles in the time it takes you to watch a movie or TV show.

Knight's Valor is part of Legends of the Dread Realm, an epic fantasy series in our Movie Book line.

In an ancient divided realm, where a king lay dying, and ruthless militiamen and mercenaries form an alliance as they march toward the realm's seat of power, a small band of warriors must defend the throne against an enemy that seeks to sweep terror across the lands; an enemy who wields an ancient and powerful dark sorcery. Amidst an inevitable war and the impending collapse of a kingdom, a young boy emerges, and he cannot speak, hear, nor see, but he possesses a rare gift that may shift the balance of power.

Fantastic book,really brought to life by the easy yet super-expressive voice of Chris MacDonnell. This is the fifth book that I've heard him read and hunger for more. I understand he is also a really great British actor. The book is an excellent story and I w o he'd recommend it to anyone with a modicum of imagination. Great job,Chris!

Why wait for the next game of thrones??

Where does Knight's Valor rank among all the audiobooks you’ve listened to so far?

Right at the top, I would put it on par with Game of Thrones!

What was one of the most memorable moments of Knight's Valor?

So far, and it's early mind you, was the realization that the Primus Sapient was leading the insurgency!

What does Chris Macdonnell bring to the story that you wouldn’t experience if you just read the book?

Chris is so good, and so natural in his delivery that I truly didn't feel like I was listening, but rather living the story - well done!

Just that Chris should be retained for the next installment of The Game of Thrones. He is a natural! Looking forward to the next in this series.