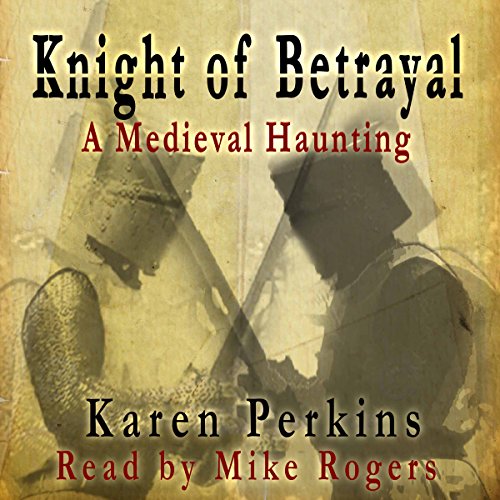 Knight of Betrayal: A Medieval Haunting

A haunting historical novel of murder and betrayal in medieval England, Knight of Betrayal will plunge you into the vibrant and deadly world of medieval England, Henry II, Thomas Becket - and four murderous knights.

The repercussions of a horrific crime reverberate through the centuries as the 12th-century ghosts seek redemption and revenge, with no thought for anyone unlucky enough to get in their way.

Running from their crime, the four knights - Hugh de Morville, William de Tracy, Reginald FitzUrse, and Richard le Brett - flee north to Knaresborough Castle, where Morville is overlord. Initially celebrating ridding their king of the pest that Becket had become, they find themselves increasingly isolated as the church and public opinion turn against them.

August is feva time - a celebration and festival of the arts. The Castle Players are to perform a play of their own creation: Knight of Betrayal, based on the events leading up to Becket's murder.

Taking the honour seriously, they work hard to get into character - but after they experiment with a spirit board, are they channeling more than just the characters of the knights they are portraying?

What listeners say about Knight of Betrayal: A Medieval Haunting

Ghosts in the Theatre

Where does Knight of Betrayal: A Medieval Haunting rank among all the audiobooks you’ve listened to so far?

This is definitely one of the more interesting audio books I've listened to. The expert weaving of British history with modern paranormal/horror is captivating.

What was one of the most memorable moments of Knight of Betrayal: A Medieval Haunting?

Which character – as performed by Mike Rogers – was your favorite?

Deadbeat Dan. He is so completely taken over by the character he plays.

Who was the most memorable character of Knight of Betrayal: A Medieval Haunting and why?

King Henry.He is very much the spoiled royal.